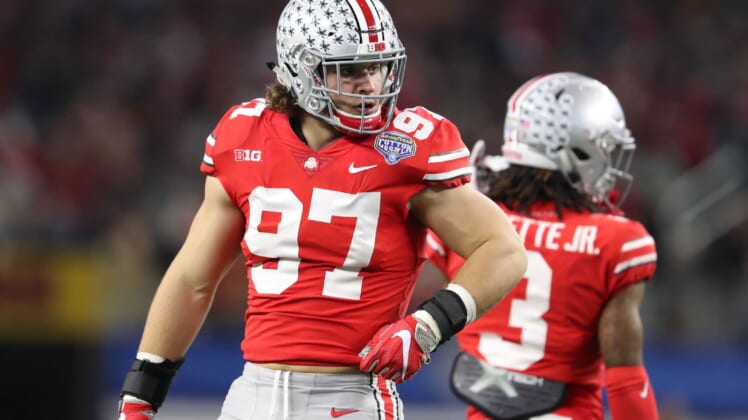 The opening week of college football season certainly provided some memorable moments. From an incredible, one-handed touchdown to defenders being put in a blender, there seemed to be a highlight moment in every game.

Even more impressive than the individual plays, a number of players stepped up with jaw-dropping performances in the first week of action. Both established stars and unknown names alike stepped up this week.

Here are the 15 most jaw-dropping performances in Week 1 of college football.

The 2018 season started off perfectly for Bosa. One of the top draft prospects in the country, the 20-year-old wreaked havoc in the backfield Saturday against the Oregon State Beavers.

Bosa constantly disrupted the Beavers’ offense, shaking off blocks and putting pressure on the quarterback. He finished with two sacks on the day, but his work wasn’t done. The junior recovered two fumbles, including one in the end zone for his first touchdown of the year.

It’s no wonder Pro Bowl defensive end Joey Bosa said Nick is already a better pro prospect than he was. This is a rare football player who will continue to shred collegiate offensive linemen all season.

There are quarterbacks who carry their offense, then there’s what Dungey did for Syracuse. In a game against Western Michigan that saw 97 total points scored, Dungey did everything to bring his team the victory.

As a passer, the senior was fairly productive with 184 passing yards and two touchdowns. While it came with some accuracy issues, 184 yards on just seven completions is an incredible feat. More impressive, he rushed for 200 yards and a touchdown on just 15 carries.

Dungey was simply a machine against the Broncos. His jaw-dropping numbers could have been even better if Syracuse didn’t rest him during the third when it held a big lead. When he came back after a break, he went right back to work and finished off his monster performance with a 27-yard touchdown run to put the game away.

In a week where several freshmen players surprised in their collegiate debut, an unheralded recruit might have been the biggest difference maker.

Jones, a three-star recruit in the 2018 recruiting class, made the big plays when the Terrapins needed him most in their upset over No. 23 Texas Longhorns. On his first three touches in college, Jones found the end zone for a touchdown, in three separate ways, no less.

On the day, Maryland’s freshman stepped up and delivered 18 of 34 points and accounted for 121 yards of offense. Jones did everything for Maryland in this win, and it could be just the beginning for the next Terrapins’ star receiver.

While Ohio State fans will have fond memories of J.T. Barrett, it’s games like this that demonstrate how much further Haskins can carry this offense. The redshirt sophomore entered 2018 with four career touchdown passes, but on Saturday he more than doubled his career total.

Facing Oregon Stage, Haskins immediately went to work taking apart its secondary. He completed 73.3 percent of his passes, threw for 313 yards and tossed five touchdown passes. He even showed his ability to run the football with 24 yards on two scrambles.

Ohio State’s offense is loaded, and while Barrett helped this offense through efficiency, Haskins turns a strong offense into a potential powerhouse. More performances like this are likely to come for an underrated Heisman Trophy candidate.

Talk about an FBS debut. After Phillips spent the first two years playing in junior college, the Rebels’ running back exploded onto the scene against the Texas Tech Raiders.

It really didn’t take that much work either. Ole Miss limited Phillips to 16 carries on Saturday, he turned those touches into 204 rushing yards and two touchdowns. His longest run came on a 64-yard touchdown run, and he juked a defender out of his shoes on a 39-yard score.

While the Rebels suffered plenty of losses through transfers during the offseason, the coaching staff clearly discovered something with Phillips. He’ll be a player to watch closely over the remainder of the season.

After two quiet seasons with the Broncos, Eskridge turned in a performance to remember in Western Michigan’s opener. It’s even more impressive given he does it all undersized as a 5-foot-9 receiver.

Height didn’t matter on Friday versus the Syracuse Orange. Eskridge hauled in eight passes for a stunning 240 receiving yards with two trips to the end zone. His biggest play came on an 84-yard score, but he consistently made big plays to move the offense downfield.

After Eskridge totaled 627 receiving yards in his first two collegiate seasons, he is now more than a third of the way to his career totals after just one game. Now he just needs to string together more consistency and become a go-to receiver for the remainder of the season. 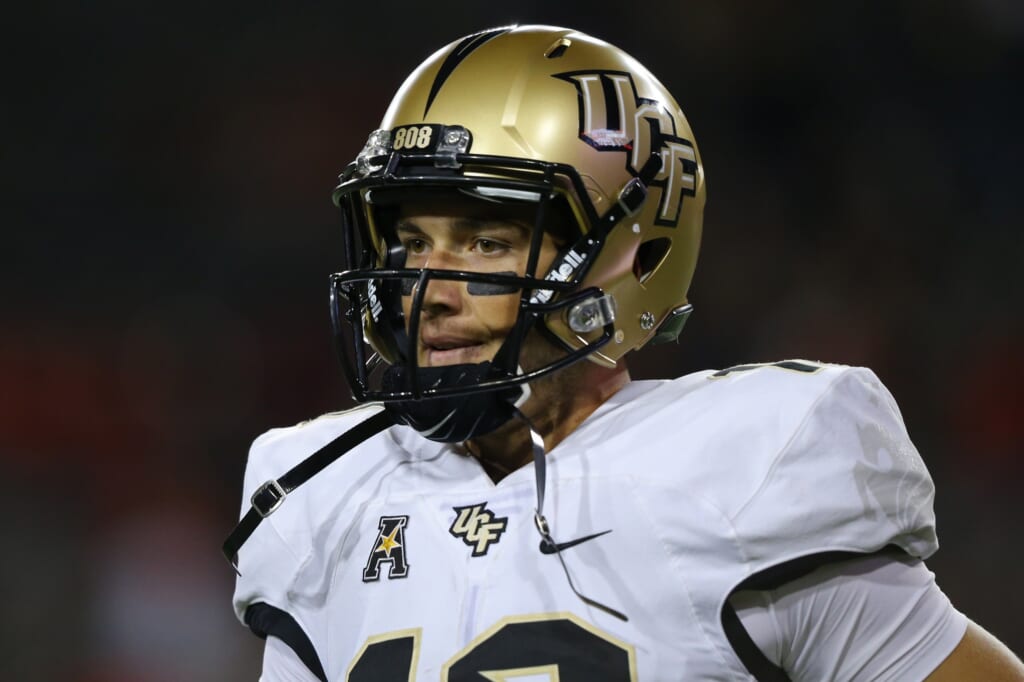 Milton entered the year wanting to prove himself as one of the best quarterbacks in college football. Coming off an undefeated season, he needed a big game to gain some national attention.

If he hasn’t earned respect after his five-touchdown performance against the University of Connecticut, people are losing out. Milton is a star at the position, capable of making plays with his legs and ripping defenses to shred with his arm.

He threw for over 4,000 yards with 37 touchdowns in 2017, numbers he could easily match this season. While the Knights might fly under the radar again, their quarterback deserves national attention now.

If college football fans haven’t heard of Arcega-Whiteside, they should research him quickly. One thing is for certain, anyone who watched his performance against the San Diego State Aztecs will forever remember him.

Arcega-Whiteside’s performance becomes even more incredible because Stanford started spreading the ball around more later in the game. He still managed to turn six receptions into 226 yards and three touchdowns. Oh, he also scored a two-point conversion as well.

At 6-foot-3, he towered over opposing defensive backs and beat them at times with his size and other times with his speed. It simply wasn’t a fair matchup as Arcega-Whiteside exposed San Diego State’s secondary. It might be time for him to get some of the attention Bryce Love receives.

Even the small-school players deserve some love, especially when they are the brother of an NFL star. While Newton’s team fell short in a loss against the Ohio Bobcats, Cam’s brother did everything in his power to win.

We’ll start with his work on the ground. Caylin led Howard’s offense in carries (21), rushing yards (93) and touchdowns (one). Howard asked him to take on the role of running back and he delivered. Newton also came through as a passer with 439 passing yards and three touchdowns.

While he made a few mistakes with two interceptions, Caylin is certainly making a name for himself as a football player.

It proved to be quite the week for the freshmen, and Moore might have delivered the best performance of them all. In front of a national audience, the freshman receiver made all kinds of highlights for the Boilermakers.

A four-star recruit with electrifying speed, Moore wowed the crowd on numerous occasions. It started with a 32-yard touchdown reception, the first of his career, then he followed it up by breaking ankles on a 76-yard touchdown run.

When the final whistle blew, Moore finished with 79 rushing yards, 109 receiving yards and 125 return yards on five kickoffs. Purdue has found its next star, and college football is fortunate to have another playmaker.

While much of the attention centered around Jimbo Fisher, this game proved to be about Williams. The junior who burst on the scene as a freshman with 1,057 rushing yards and eight touchdowns as a freshman then took a step back in 2017.

A major test is about to come for Williams and Texas A&M’s offense when they face the Clemson Tigers. Even if the Aggies struggle next week, fans in College Station should be excited about Williams in this offense.

When a player is named an All-American quarterback, it can apply a lot of pressure on them. It’s the ability to overcome that pressure and deliver upon expectations that can turn a great quarterback into a serious Heisman Trophy contender.

In West Virginia’s season opener, Grier dropped the hammer on the Tennessee Volunteers. The senior quarterback was on fire with four second-half touchdown passes to help him finish the day with 429 passing yards and five touchdowns.

Grier showed some rust and uneasiness in the first half, but he quickly flipped the switched and dominated to put the game away. West Virginia’s schedule gets easier from here, so expect to see even more recognition for him going forward.

Every year, people across the country debate who is the best quarterback in college football and which player is the best draft prospect. There could be a similar debate this season for the best defensive player between Bosa and Oliver.

Ultimately, it could become a race of production and big plays this season. Bosa delivered a big performance on Saturday, and so did Oliver. While he didn’t record a sack or a touchdown, the 20-year-old racked up 13 tackles with 3.5 tackles for loss and two quarterback hurries.

Oliver is a man on a mission with a sole focus to destroy any opponent that is in front of him. An athletic marvel with the ability to create chaos in the backfield in a number of ways, we should see Oliver and Bosa try to one-up each other with dominance on a weekly basis.

No matter the opponent, performances like the one Hansen put up on Saturday deserve attention. The senior’s matchup against Southeast Missouri State provided an opportunity to post monster numbers, and he did just that.

Throwing six touchdowns in a game is a jaw-dropping performance on its own. Doing it in three quarters is something you only see in video games, yet Hansen did just that. Even more incredible, all six touchdown passes went to a different receiver. Wherever Hansen goes from here, this was a game he’ll never forget.

When opportunity knocks, it’s critical to step in and seize it. A door opened when Mississippi State suspended starting quarterback Nick Fitzgerald, and Thompson took advantage of it.

While it wasn’t the greatest display of accuracy, Thompson certainly came through for the big plays. In the first three quarters of action, he threw five touchdown passes and completed 13 passes for 364 yards. Thompson was also featured heavily in the running game with 84 rushing yards and a touchdown in three quarters.

Once the fourth quarter began, the sophomore quarterback capped off his night with even more magic. After a 25-yard touchdown run, Thompson finished the night with seven total touchdowns and over 470 yards in total offense. It just doesn’t get any better than that.