15 most jaw-dropping performances from CFB Week 4 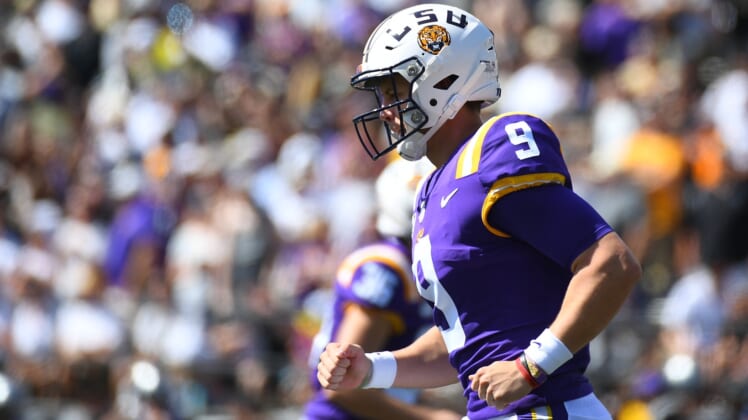 College football fans came into Week 4 hoping to see some shocking upsets, thrilling games and stunning performances. They got exactly what they wanted from this weekend’s action.

It started on Friday when the USC Trojans stunned No. 10 Utah behind an astonishing performance by a third-string quarterback and a senior wide receiver. The individual performances only got better after with extraordinary statistics and showcases by prolific athletes from Alabama to California.

Here are the 15 most jaw-dropping performances from Week 4 of the college football season.

Fink was on the brink of transferring just four months ago. Now he’s the quarterback responsible for delivering one of the most surprising performances this season. The junior took over for Kedon Slovis on the first drive and dominated the Utes.

The third-string quarterback threw a dime for a score on his first drive in the game. He followed that up with a miraculous move to escape pressure before launching a go-ahead touchdown. Fink picked Utah’s secondary apart for 351 yards and three scores in a sensational game with limited practice reps. Fink’s showcase captured the essence of a jaw-dropping performance in every way.

While the Bulldogs didn’t draw the national spotlight on Friday night, Henderson made sure anyone lucky enough to watch him witnessed a masterpiece. Louisiana Tech’s running back set the definition for efficiency against Florida International.

Henderson didn’t get his first carry until the second quarter. After a short four-yard gain, he took his next carry the distance by bulldozing defenders in his path for a 29-yard touchdown. Louisiana State loved what it saw and fed him more in the second half. He rewarded them with 141 rushing yards and three touchdowns on only 15 carries in a 43-31 win.

On a night when Fink spread the ball around effectively, Pittman Jr. still crushed Utah with one big play after another. USC’s receiving corps is loaded and the senior somehow found a way to outshine them all.

The highlight of the night was his leaping catch turned 77-yard touchdown that sealed the game. Of course, that only accounted for a third of the senior’s yards. Facing a secondary that allowed 640 total receiving yards in its first three games, Pittman Jr. racked up 232 yards in a crucial and unexpected win for the Trojans.

No player is elevating their game more this season than Burrow. LSU’s move to the spread offense unlocked something inside him and unleashed a Heisman-caliber quarterback that can lead the Tigers to the College Football Playoff.

Burrow routinely made Vanderbilt’s defense look like it belonged in the FCS. Every time he stepped onto the field, Burrow delivered a throw or showed movement in the pocket that screamed he is gifted. He tossed six touchdown passes on the day, four going to a sophomore receiver, and racked up 394 passing yards with only seven incompletions on 30 attempts.

The Heisman Trophy race feels more crowded than ever with incredible candidates and Taylor did everything possible to separate himself from the pack on Saturday. He didn’t even need much work to do it against No. 11 Michigan.

Taylor clobbered Michigan’s defense in the first quarter. Once he finished running defenders over, he left them in the dust on a 72-yard touchdown run. The junior racked up 143 yards and two scores in the quarter before being sidelined with cramps. Fortunately, he returned in the second half and put the finishing touches on Wisconsin’s big win with his 203-yard, two-touchdown outing.

Tagovailoa needed to do great things to remain among the front runners in the Heisman race. He did more than enough in three quarters of work during another blowout win for the Crimson Tide.

The work started early on a quick throw to receiver Henry Ruggs for a 45-yard touchdown. Tagovailoa went back to Ruggs on the next drive for a 74-yard trip to the end zone. After getting Ruggs involved, Tagovailoa showed some love for Jerry Jeudy with two touchdowns. Alabama’s star quarterback completed 17-of-21 passes for 293 yards and five scores and became the first quarterback in team history with consecutive four-plus touchdown games.

Chase jumped onto the national radar in Week 2 with a 147-yard performance against Texas. He made that look pedestrian with an insane showing against Vanderbilt. The sophomore receiver showcased his speed early with an impressive 64-yard touchdown. Burrow kept feeding him and Chase delivered with a scorching 51-yard touchdown to cap off his 199-yard, three-touchdown half. He kept rolling in the third quarter with his fourth touchdown and an unthinkable 229 yards on 10 catches. We’re witnessing the emergence of football’s newest star.

The Cyclones were looking for someone to punish after suffering another heart breaker against Iowa to lose the Cy-Hawk Trophy. Unfortunately for Louisiana-Monroe, Purdy took out his frustrations on its defense. Purdy put on a phenomenal act against the Warhawks. He accounted for three touchdowns in the first half, two on the ground. The sophomore added three touchdowns in the third quarter to finish with 435 passing yards, 75 rushing yards and six touchdowns. Purdy is the future of Iowa State’s program.

There are eye-popping defensive performances and there’s what Weaver did in Week 4. He is the heart and soul of the Golden Bears’ defense and the senior brought the talent to back up his leadership in a close win.

California’s top linebacker was there to make the stop on nearly every play. He racked up an astonishing 22 tackles on Saturday with no takedown being more critical than his game-saving stop at the goal line when time expired. The Golden Bears are undefeated and a lot of credit must go to this linebacker’s work.

We’ve seen some big games by defensive linemen through the first three weeks. It will now be difficult for anyone to top Taylor’s showcase against North Carolina.

Taylor strip-sacked North Carolina’s quarterback, picked up the fumble and returned it for a 20-yard touchdown. He kept going with a 20-yard interception return in the second half, another forced fumble and more quarterback hits. Taylor finished with 2.5 sacks, three turnovers, a touchdown and a big win for App State.

While Wisconsin survived for a little while when its star waas hurt, Western Michigan couldn’t do the same after Bellamy’s injury. It’s an even greater shame because it seemed to be the only thing that could stop him. The senior turned 15 carries into an eye-popping 165 rushing yards and two touchdowns in three quarters. Bellamy now has 357 rushing yards and five touchdowns in his past two games and he might get at least half of that in Week 5 against Central Michigan.

There are simply no words that capture some of the things Fields can do on the football field. Ohio State handed Miami (Ohio) a 5-0 lead early on Saturday but it didn’t take long before Fields matched their total points with total touchdowns.

While TCU suffered its first loss of the season, the coaching staff must be loving what its senior running back keeps putting on tape. Anderson made the most of his 21 touches on Saturday and left SMU thankful he didn’t get more work.

A majority of Anderson’s dominance came on the ground with 161 rushing yards and two strolls into the end zone. Anderson showed off his speed and power on a gorgeous 77-yard run early in the game and some big-play ability in the clutch on a 32-yard catch-and-run. Anderson now has 385 total yards in his past two games.

It appears four-touchdown games were a trend this week. While the Owls thrived behind quarterback Chris Robison once again, Antoine gets the nod for his jaw-dropping performance.

Antoine started rolling against Hampton’s secondary in the first quarter with a 37-yard touchdown. Robison must have liked the feeling because he kept going to the 5-foot-10 receiver and Antoine thanked him with three more touchdowns before the third quarter even ended. The player who entered Week 4 with two touchdowns across three seasons finished Saturday with 173 receiving yards and four scores.

Sometimes, a jaw-dropping performance is about more than statistics. Ehlinger took the field without his favorite receiver and found a way to finally end years of disappointment for the Longhorns at the hands of Oklahoma State.

The Cowboys came to town with a four-game winning streak against Texas. Ehlinger matched that number with four touchdown passes, 281 passing yards and 20-of-28 passes completed. Texas relied on his legs in this game and he came through in the most crucial moment. Ehlinger avoided pressure on third down and took off for a 29-yard gain to sink a dagger into the Cowboys. A losing streak snapped and now the pathway is clear for this team to jump into the top-10 rankings.