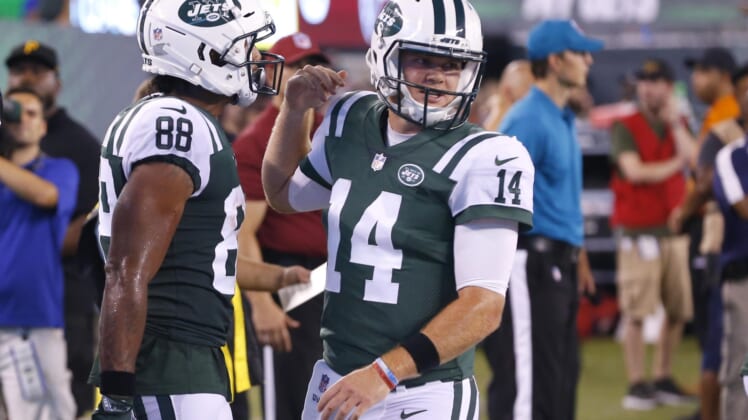 The 2018 NFL season is upon us, which means it’s time for some bold predictions before the madness and chaos of reality sets in.

Who’s going to Super Bowl LIII? Which teams are going to take a huge step in the wrong direction? Will the Browns win any games this year?

We’ve got those questions answered, and much more, as we boldly predict what will happen during the 2018 NFL season.

Last season, Todd Gurley was the dream fantasy pickup. He led the entire league in yards from scrimmage (2,093) and total touchdowns (19), picking up Offensive Player of the Year honors. That’s the type of impact we’re expecting to see from Christian McCaffrey during the 2018 NFL season.

He was an absolute dynamo in the preseason and will be heavily featured in Norv Turner’s offense this year. Already one of the league’s best pass-catching backs, McCaffrey will top 2,000 total yards this year. Mark it down.

Before the preseason began, we predicted that Buffalo would sport the worst offense in the league. Nothing that transpired this summer has led us to change that opinion, and while the defense is a bit more accomplished it’s hard to imagine the Bills winning many games this coming season.

Nathan Peterman is like a poor man’s Alex Smith without the decision-making prowess. Josh Allen is going to get eaten alive if he’s the starter — see the third preseason game as your prime example. In the end, we’re predicting that the Bills have the worst record in football and subsequently will have the No. 1 pick next year.

The NFC West is going to be highly competitive this year. On paper, the Los Angeles Rams should win the division, not to mention go extremely deep in the playoffs. San Francisco is a work in progress, but the defensive line is dominant and the offense is going to be very formidable. Arizona’s defense is lights-out good and looks like a turnover machine, and with David Johnson back the offense should put up some nice numbers.

Seattle, meanwhile, enters the 2018 season with a defense that is a shell of its former glorious self. Doug Baldwin isn’t 100-percent healthy, and even he’s admitted he won’t be all year. The offensive line is still a huge problem. In short, the only way the Seahawks win half their games this year is if Russell Wilson totals 6,000 yards and 40-plus touchdowns. That’s not happening. 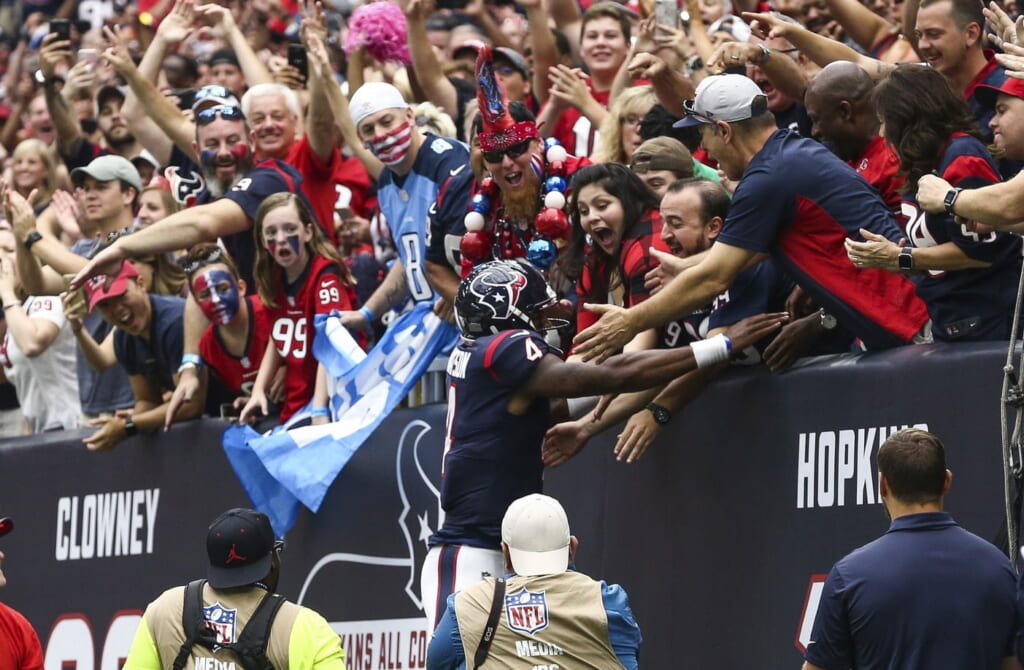 The big question we still don’t have an answer to — the thing that could derail this prediction in a big way — is whether the Houston Texans can protect their young quarterback. Ndamukong Suh probably has something he could say about that. But assuming that Watson can stay on the field this year, he’s going to put up jaw-dropping numbers.

He made NFL history left and right due to his exploits as a rookie. His chemistry with both DeAndre Hopkins and Will Fuller is breathtakingly beautiful. He’s a dual-threat passer who isn’t afraid to stand tall in the pocket and deliver strikes in the face of pressure. If Watson is on the field for 16 games this year, he’ll absolutely be in the MVP conversation. We’re predicting he walks away with that hardware at the end of the season.

The Miami Dolphins have a problematic combination going on between their offense and defense. The offense is a dink-and-dunk affair without any real oomph, and their defense looks like it’s going to be a huge problem.

So, we’re expecting the Dolphins to give up plenty of points this year. And without an offense that can respond with a high volume of points, it’s going to be another ugly campaign in Miami. The one positive is that the team’s schedule lends itself to potentially lead to some early wins. That being said, head coach Adam Gase hasn’t given us reason to be optimistic. In the end, we predict he’ll be fired before the season is concluded as the Dolphins continue to disappoint.

The Chicago Bears are going to be a fun team to watch this year. They might lose more games than they win, but there is some incredible talent on both sides of the ball. Now that Khalil Mack is on board, that defense is going to be something to behold.

Vic Fangio is one of the best defensive coordinators in the league. He also has a history of putting his players in a position to excel beyond anything they’ve ever achieved before. This fact, combined with the talent that will be playing alongside Mack on the front seven, leads us to believe he’s going to have a career year.

Considering he’s already had a 15-sack season in Oakland, we’re boldly predicting 20-plus sacks for the new richest defender in NFL history. 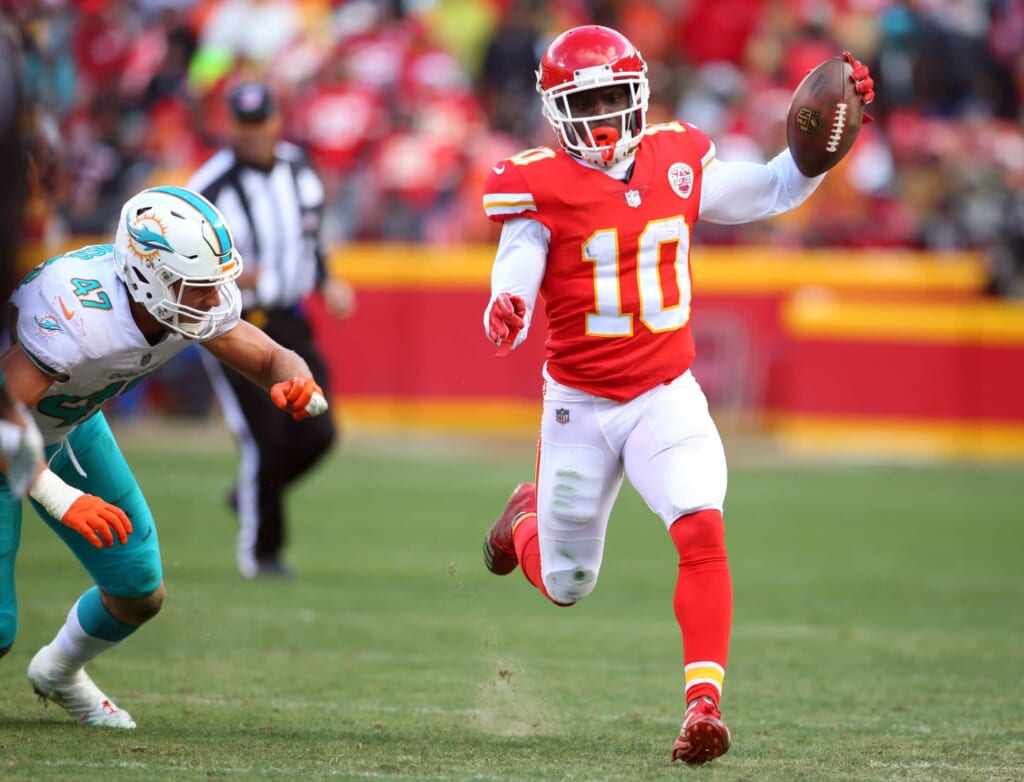 Here are some numbers that just shine like a beacon on a hill as we consider what Tyreek Hill might achieve this season: This preseason, he caught 14 passes for 182 yards, including a dynamic 69-yard touchdown, on just 16 targets.

Patrick Mahomes looked for Hill far more often than he looked for Sammy Watkins, both during training camp and the preseason. Clearly, he feels extremely comfortable throwing to the most dangerous deep threat in the NFL. This all leads us to believe that Hill is in line to blow last year’s breakout campaign out of the water in 2018.

He’s been on an upward trend since entering the league as a fifth-round pick out of West Alabama in 2016. That’s going to continue this season.

Andrew Luck gets Colts back to playoffs

Before injuring his shoulder at the start of the 2015 NFL campaign, Andrew Luck got the Indianapolis Colts to the playoffs in each of his first three seasons. That injury proved to be the catalyst for three miserable seasons in which Indy failed to make the playoffs once and ultimately led Luck to remain out of the lineup for all of 2017.

Not only is Luck back healthy for the first time in three years, but he looks like his old self again. He doesn’t even seem to be remotely concerned about his surgically repaired shoulder, which is a huge mental hurdle some players struggle to overcome.

The AFC South is extremely tough, and the Colts have some serious issues still on the defensive side of the ball. But they weren’t exactly awesome when Luck led them to the AFC Championship Game after the 2014 season, either. The Colts will get back to the playoffs this year, make no mistake about it.

It would be easy to say that Roquan Smith or Bradley Chubb will win Defensive Player of the Year in 2018. But this is a bold predictions list, baby! We’re not going to go with the obvious.

Davenport missed almost all of the preseason with a nagging groin injury. However, once he was able to play, he looked like a dynamic playmaker — the type of player worth selling out to land in the draft, which is obviously what the New Orleans Saints did this past April.

Davenport will be playing opposite Cameron Jordan, who is one of the best defensive ends in the NFL. He’ll have his one-on-one opportunities, and he’ll dominate off the edge for the Saints. 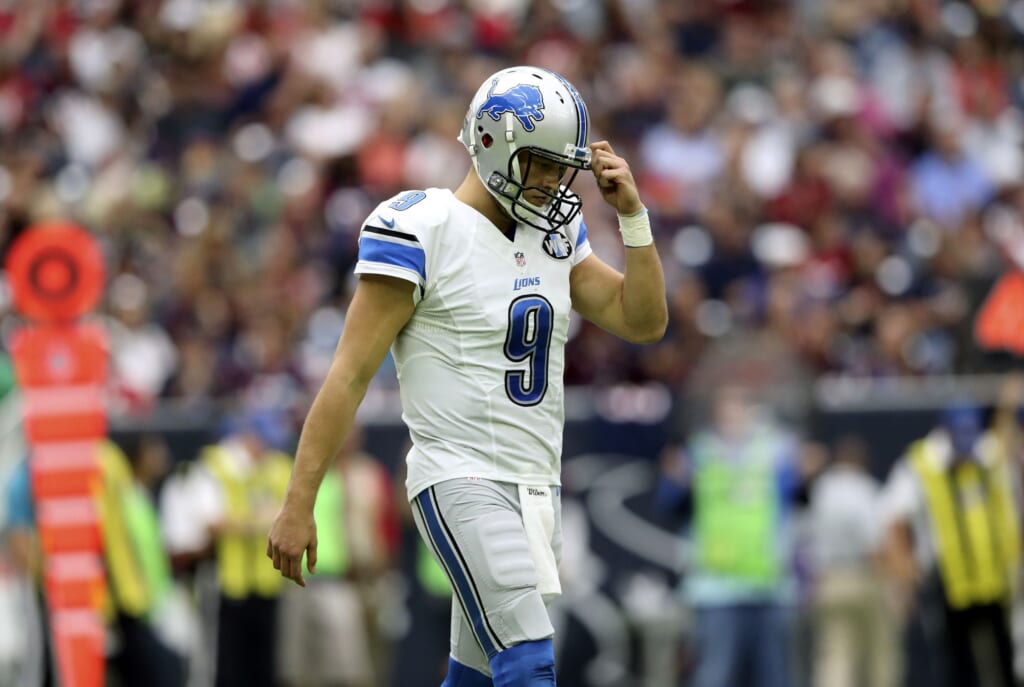 Every team in the NFC North appears to have improved in a big way this past offseason…except for Detroit. The team did invest heavily in the offensive line and the running back position, but the preseason didn’t give fans any reason to be optimistic about improvements to either group.

Detroit’s defense isn’t great, either. This team just has the feel of mediocrity, or worse. And it sure doesn’t help that rookie head coach Matt Patricia has looked out of his depth so far as the leader of this team. We’re definitely not bullish on the Lions this year. They could be sneaky bad, to be honest.

There’s plenty of skepticism about the Cleveland Browns this year. And we totally get that — 1-31 speaks for itself, and Hue Jackson continues to make baffling decisions.

That being said, there is some incredible talent on Cleveland’s roster this year. The offense should put points on the board, whether it’s Tyrod Taylor or Baker Mayfield under center. And the defense has the look of a potential top-10 unit in the NFL, with Myles Garrett looking like the next coming of Bruce Smith.

The Browns are going to win games this year — at least six of them. Book it.

Perhaps I’m drinking the preseason Kool-Aid a bit. But my goodness, the Cincinnati Bengals have some intriguing talent on both sides of the ball. Defensively, they might feature the most dangerous front seven in the entire NFL in terms of rushing the passer — Geno Atkins is still a cheat code, and Carl Lawson looks like a star.

Andy Dalton himself was razor sharp all preseason, and if John Ross can stay healthy, along with staying focused on the field, he’s a game-changer for the Bengals.

Of course, we’ve seen Dalton look pretty good in the regular season before, only to suffer an epic meltdown during the playoffs. He’s 0-4 in postseason play, with just one touchdown and six interceptions to his credit. All that being said, I just have a good feeling about Red Rocket in 2018.

Sam Darnold is going to open the season as the starting quarterback of the New York Jets. He’ll take his lumps, to be sure. But incredibly, Darnold seems to already have a firm grasp on New York’s playbook, along with a mature approach to the passing game that wasn’t evident during his tenure at USC.

Darnold, minus one poor pass on a fourth down that turned into an interception, didn’t force the ball to his receivers this preseason. Instead, he took what the defense gave him, which is usually extremely difficult for rookies to adhere to. The Jets don’t have the most talented roster of playmakers to assist Darnold, but he’ll start every game this year if he stays healthy, and in the end he’ll be the NFL’s Offensive Rookie of the Year.

Giants go from worst to first in NFC East 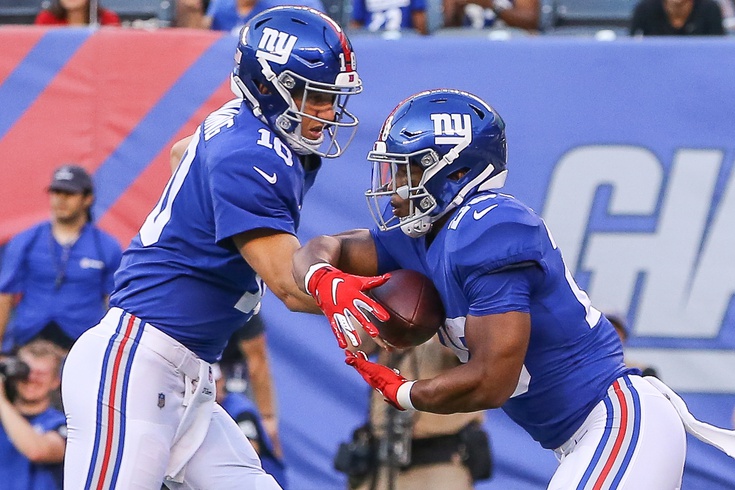 The NFC East is always a crazy division. Seemingly every year it comes down to the wire, though last season was an exception as Philly dominated. As the Eagles soared to a championship, New York’s star came plummeting to earth. The Giants suffered a horrible rash of injuries, and head coach Ben McAdoo absolutely lost his team.

Now Pat Shurmur is at the helm, and the Giants look ready to make a complete 180-degree turnaround this season. Loaded with offensive talent, if this team stays healthy there’s no reason to think New York won’t make the playoffs. We’re taking our prediction a bit further to say they’ll go from worst to first, winning the NFC East in 2018.

There are some great teams in both conferences, but the Green Bay Packers and Jacksonville Jaguars are my personal picks to play in Super Bowl LIII.

Green Bay appears to finally have the defensive playmakers to keep opposing offenses from going bonkers through the air. The additions of Jaire Alexander and Josh Jackson were strokes of genius from rookie general manager Brian Gutekunst. So was adding tight end Jimmy Graham in free agency. With a healthy Aaron Rodgers, this team can accomplish anything.

Jacksonville is almost the exact opposite of Green Bay in that it has everything but an explosive offense. Blake Bortles continues to baffle at times with his decision-making, but the Jags will likely be a run-first offense with Leonard Fournette as the catalyst. In terms of defense, no team in the league compares to Sacksonville, which really should have beaten Tom Brady and Co. in the AFC Championship Game this past January. Lessons were learned, and we expect this team to do big things in 2018.