14 NFL players who rescued their careers in 2017

NFL lifespans are famously short. The average career length is between three and six years, depending on which number you look at, and it’s not uncommon to see someone break onto the scene one year and peter out the next.

But the reverse can happen as well. Every year, there are a crop of players on their last legs who rise to the challenge and earn their keep.

Here are 14 who did that this season.

When the Indianapolis Colts cut Robinson in March, it looked like the end of the line. Even after the Eagles signed him later that month, it would have been surprising had he made it through training camp. Not only did he do that, but Robinson has been a lockdown corner. He has a 68 percent success rate this season, second among qualified corners. Robinson is as big a reason as anyone for the Eagles’ defensive success this season and nobody saw it coming.

It’s hyperbolic to say that Goff’s career was rescued this season, but things did not look good for the Cal product after 2016. He threw more interceptions than touchdowns, had no pocket presence, and averaged a lowly 2.82 adjusted net yards per attempt in 2016. As a No. 1 overall pick, Goff wasn’t getting run out of the league, but suffice it to say he was on the wrong track. This year, it’s been a sea change. In four more games than the seven he played a year ago, Goff has thrown two fewer interceptions. His numbers aren’t just up, they’re doubled or tripled, and the eye test backs it up. Goff looks like a star. It just took him a year to get there.

There seems to be a pattern emerging with quarterbacks who escaped Jeff Fisher’s grasp this offseason. Keenum was likely on his way to a career as a mediocre backup before this season. After leading the Vikings to a 7-2 record in Sam Bradford’s absence, he could end up with a long-term contract as a starter. Keenum has been helped by a good supporting cast, but he’s also been a significantly better player. His interception rate is down from 3.4 percent to 1.5, his touchdown rate up to 4.2 percent from 2.8. He leads all quarterbacks in DVOA and sack rate as well.  Even if Bradford were to come back, Keenum may have won the job for good. 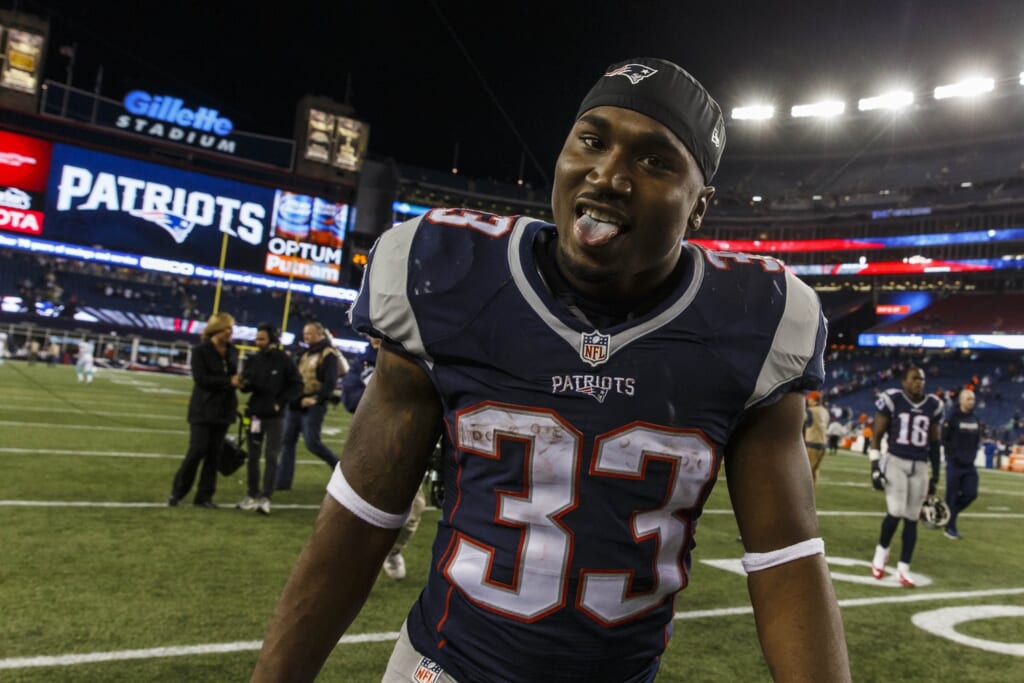 Lewis was relegated to third-string duties in the Patriots’ backfield last season after returning from a knee injury, and he didn’t look himself. After New England brought in Mike Gillsilee, Lewis didn’t break double-digit carries until Week 6. But since, then, he’s been on a tear. The 27-year old is averaging 5.1 yards per carry on the year and churning through tackles quicker than Tennessee is calling head coaches. Lewis might be the runaway winner of the unofficial award for Most Fun Player to Watch as well. He’s the king of getting that extra yard or two when the play looks over. Lewis has cemented his place in the Patriots’ backfield for a while.

This year might have been Agholor’s last shot in Philly. The former first rounder had just 648 receiving yards in his first two years, showcasing severe drop issues and failing to make an impact. Then, the switch flipped. Agholor has a 62 percent catch rate, up 10 percent from last year. He’s been a legit deep threat for Carson Wentz and ranks 21st among receivers in DVOA. This is the player the Eagles thought they were getting back in 2015.

It was easy to see the dominos falling out of Brate’s favor when the Bucs drafted O.J. Howard in April. Logic dictated that the first-round pick would take a fair amount of Brate’s snaps away, but the veteran has proven his worth. He’s top-five among tight ends in DYAR after putting up 442 yards on 35 receptions. Brate will be a free agent after this season and it’s unlikely the Bucs bring him back with Howard waiting on the wings. However, Brate has guaranteed that he’ll be able to find work this offseason, not to mention a nice contract. 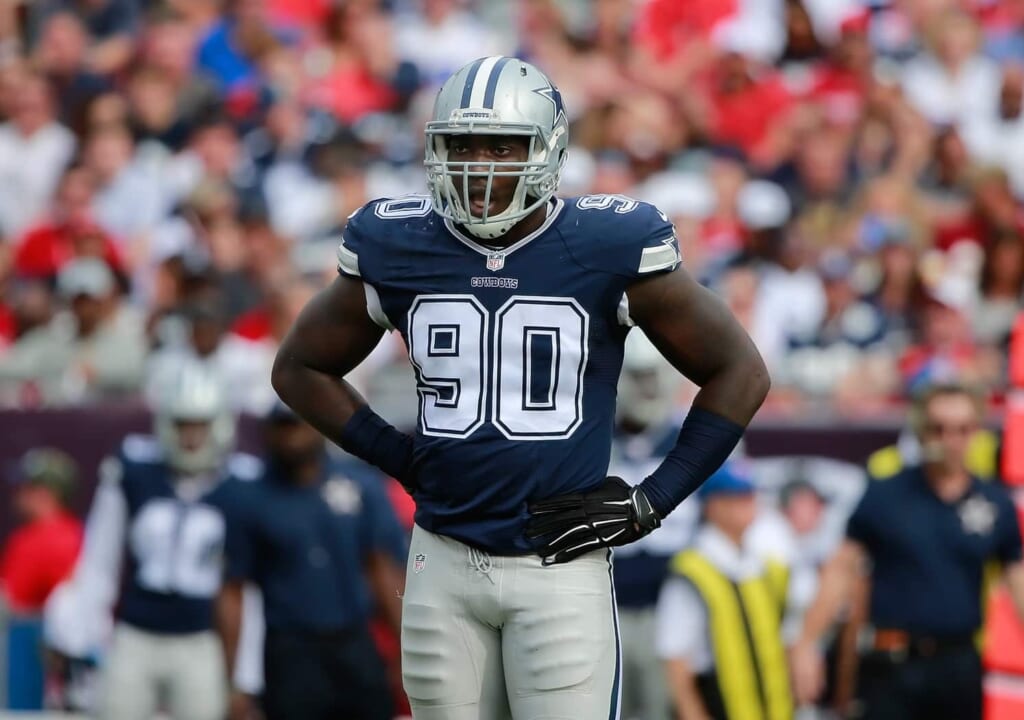 Lawrence played just nine games in 2016 and notched all of one sack. The Cowboys had one of the worst pass rushes in football and his lack of production was a big reason for it. This year, the 25-year old leads the league with 13.5 sacks and ranks third with 35 pressures, per Football Outsiders. Lawrence went from a fringe player to an All-Pro lock. How things change in a year.

Various injuries kept Galette off the field for two full seasons prior to 2017. When the Redskins kept him on the roster for training camp, it was surprising — there aren’t many players who can miss two years and stay in the league. Galette has made a lot of the opportunity. Playing as a rotational pass rusher, he’s put up 15 pressures and two sacks, per Football Outsiders. Galette hasn’t been a star, but that’s good enough for him to stay in the league, which seemed a tough ask a few months ago.

Undrafted free agents like Crawley are always playing for their NFL lives. That is, until they aren’t. Crawley — an unknown commodity who started just five games on a bad defense last season — has been a lockdown corner. He’a allowing just 5.1 yards per pass with a 66 percent success rate, both of which rank fourth among qualified corners, per Football Outsiders. He and rookie Marshon Lattimore have been the biggest reasons for the Saints’ defensive breakthrough this season. Those two have turned New Orleans’ secondary into one of the best units in the league, an unthinkable prospect a few months ago.

Flowers still hasn’t been anything close to an above-average left tackle, but credit where it’s due: he’s been competent. After a couple horrific early-season performances, Flowers went from Week 2 to last week against Washington without allowing a sack. It’s important to note that sacks aren’t the end-all be-all. Flowers has allowed pressures, struggled in run blocking, and been called for seven penalties. But he hasn’t been a disaster in any sense of the word and that represents a step up. For a former first-round pick, it’s enough to extend a career.

Onwuasor, another former undrafted free agent, has carved out a permanent spot in Baltimore’s defense this year. He’s been the league’s third-most efficient tackler, per Football Outsiders’ tracking, with 35 solo tackles compared to just one broken tackle. Onwuasor’s playing time has gone up accordingly as well — he’s started eight games this season compared to just one in 2016. His ascendance has quietly been one of the league’s better stories this year. Expect him to be a part of one of the league’s best defenses for years to come. 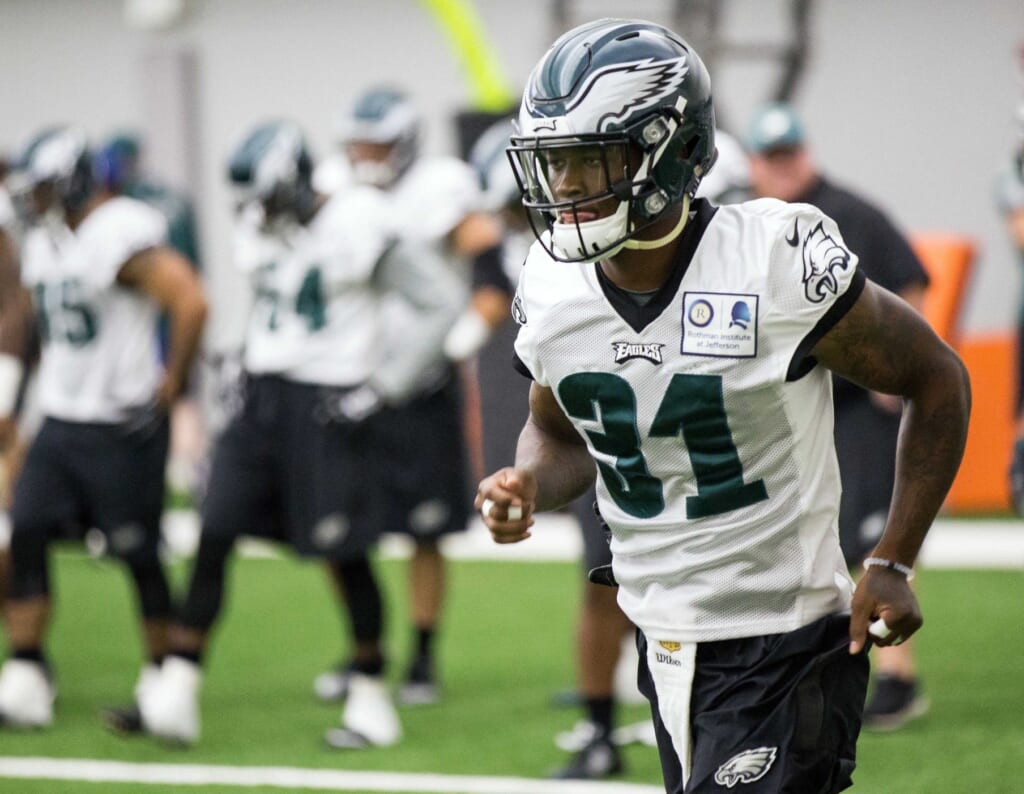 Mills hasn’t been a star, but he’s experienced dramatic improvement this season. The former seventh-rounder was arguably the most unreliable cornerback in football last year. Every time he was on the field, you could see opposing quarterbacks licking their lips. This year, he’s got a 58 percent success rate with 5.7 yards allowed per pass, according to Football Outsiders. There have still been a couple instances where Mills has reverted back to last year’s form, but those have been few and far between. For the most part, he’s played well and earned playing time — a stunning turnaround.

Jordan, the No. 3 overall pick in 2013, seemed to have washed out of the league for good. He struggled to make an impact his first two years in Miami, missed the entire 2015 season because of substance abuse violations, then missed the entire 2016 season with a knee injury. The Seahawks took a chance in signing him and Jordan missed the first nine weeks of the season thanks to another knee operation. Since returning, Jordan hasn’t been a star, but he’s notched a sack and two pressures in two game, per Football Outsiders. He’ll probably never be the same guy who was at Oregon, but it’s nice to see Jordan making some kind of an impact for the Seahawks.

Coming into the season, it was almost a given that Bowles would be fired. The 2016 Jets collapsed under his watch and the team’s 2017 iteration looked like it had 0-16 potential. Bowles was a natural scapegoat and hadn’t acquitted himself especially well in terms of game management either. But New York has been legitimately competitive this season. Bowles has piloted a team playing Josh McCown under center to 4-7 and the defense has legit talent. That won’t help the Jets get a quarterback in the draft, but it will help Bowles keep his job.