Let’s face it: mocking the NBA draft is impossible. The smartest, most well-connected reporters in basketball could all put their heads together to come up with a mock draft tonight and it would undoubtedly be wrong. If you don’t believe me, take a look at SB Nation’s NFL mock draft database and see just how wrong the consensus was.

The fact of the matter is that things constantly change. Nobody knows what’s happening — not even the teams themselves — until the clock hits zero and the card is handed in (or, more accurately, until Adrian Wojnarowski tweets it).

In that spirit, let’s get weird with these predictions. Every year we get shocked on draft night — the Milwaukee Bucks taking Thon Maker tenth overall last season, Kristaps Porzingis getting a rousing chorus of boos when the  New York Knicks took him fourth in 2015 — so why not go a little outside the box? There’s as much a chance of these being right as anything else. 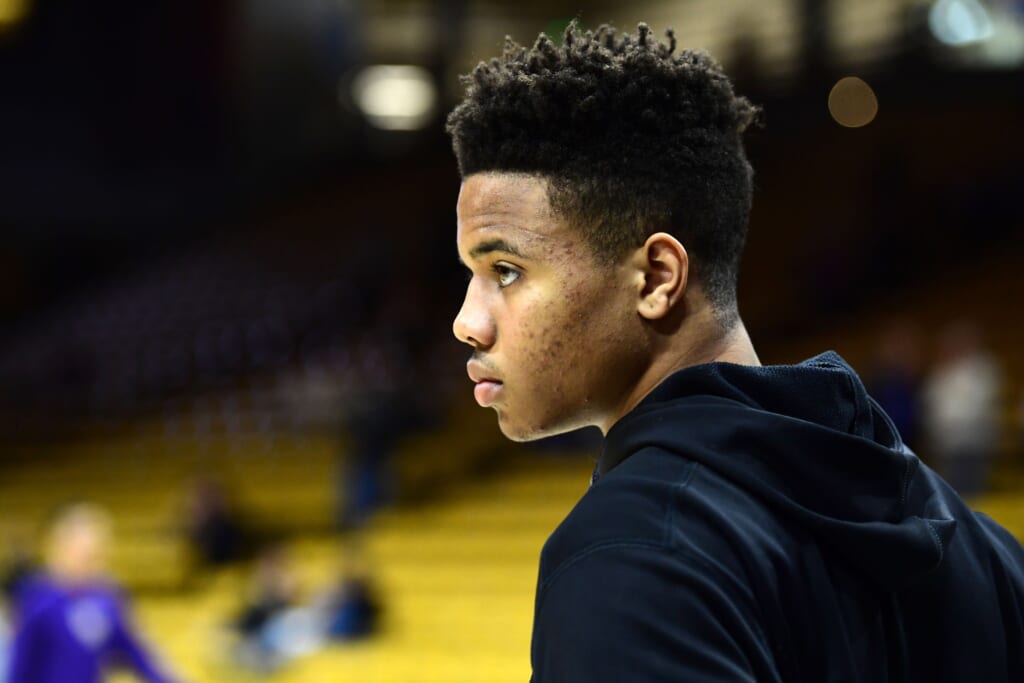 This shouldn’t be too bold of a prediction, but the rumor mill is flying off the handle. The Los Angeles Lakers may hesitate to take Lonzo Ball with the second pick (more on that here). Josh Jackson reportedly got a promise to be drafted from one of the top three, and it may not be the Philadelphia 76ers. The Boston Celtics reportedly may not take Markelle Fultz first overall.

None of that is going to happen. Draft night will be crazy, but not that crazy. Boston would be insane not to take Fultz first — he’s very literally at the top of every draft board. Maybe they decide to trade the pick if someone like Paul George were to become available (which doesn’t seem likely at this point), but passing on Fultz altogether is a little too nuts.

As for the Lakers passing on Ball, these reports are as transparent as Magic Johnson winking at Paul George. Los Angeles is telling reporters they may not take Ball for two reasons: they’re trying to build suspense to increase the value of their pick in case someone wants to knock them over with a trade (aka: the Sacramento Kings), and to give Lavar Ball a taste of humility. The truth is that Johnson won’t pass up a chance to potentially recreate Showtime with Ball, a sure-fire All-Star and L.A. native.

Now to the Sixers. If Jackson got a promise from a team in the top three that isn’t the Celtics or Lakers, as we’re presuming, that leaves only one option. Jackson is a logical fit for a Philadelphia squad in need of a wing, which can’t afford to draft another guard with shooting trouble (De’Aaron Fox). As for Jayson Tatum, most experts seem to agree that, while a potential All-Star, Jackson is a step above him.

The Brooklyn Nets trade up for Harry Giles

Harry Giles has risen, fallen… and is now on the rise again. Check out my interview w/ the talented #NBADraft prospect. @ESPNNBA @espn pic.twitter.com/xJwpMDjmr1

By now, you know the situation Brooklyn is in. It traded away its future back in 2013, giving up a treasure trove of draft picks to the Celtics (including what turned out to be this year’s No. 1 overall pick), and are now screwed. They had the worst record in the league last season, hold almost no assets and can’t tank because Boston has their pick next year as well.

As of now, the Nets hold the 22nd and 27th picks in the draft. They have the former because of a trade that sent Bojan Bogdanovic to the Washington Wizards and the latter due to the pick swap that gave Boston the first pick in this draft.

Giles, a center out of Duke, is projected to go anywhere from 15 to the mid-20s. The former top recruit could fall to Brooklyn’s range. Or he could get picked up by another team looking to take a risk on a kid who has as much talent as anyone but will be playing on a surgically repaired ankle.

But this risk makes more sense for Brooklyn than anyone. Think about it: they have no way of landing a star unless they somehow woo a free agent, which probably isn’t happening. Giles was going to be one of the top picks in this draft until he got hurt — if he can overcome the injury, he could easily be an All-Star — and the Nets have nothing to lose by taking the risk. This draft is deep, but not deep enough that the Nets will get a sure thing at 27, or even 22.

They could package both of their picks, or one of them and, say, Brook Lopez, to move up to the 15-18 range so they can be sure to take Giles. It just makes too much sense.

The Kings trade up, but to the fourth pick 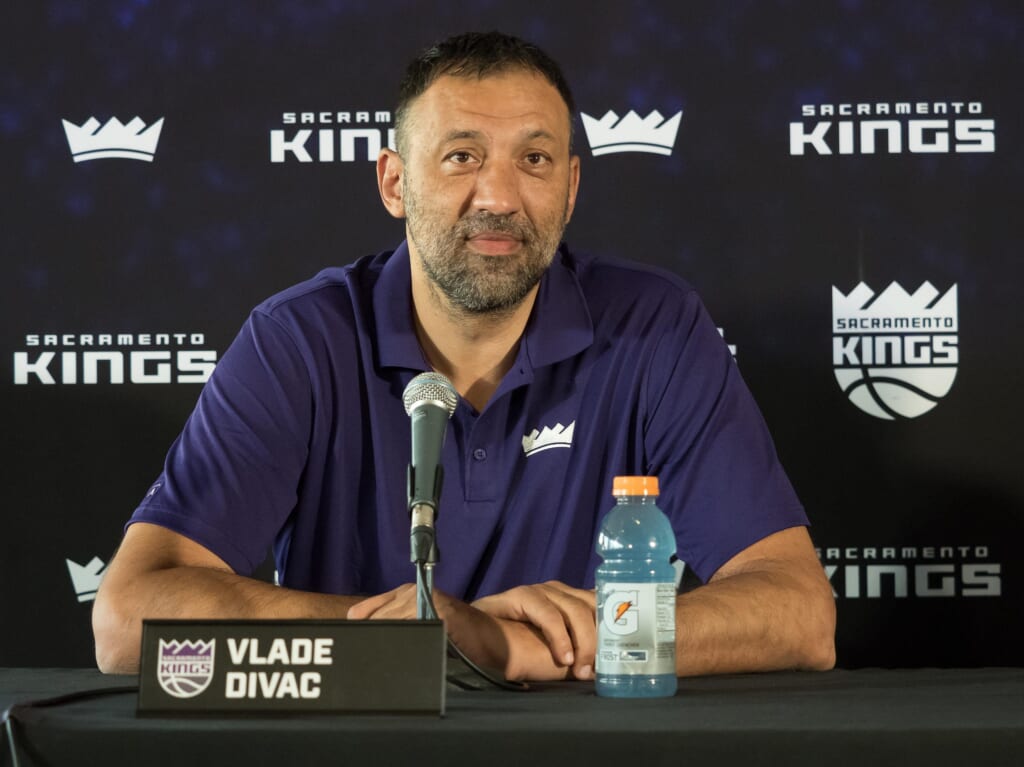 Sacramento has been rumored to trade up to the top-three in order to take De’Aaron Fox, but the price — trading both the No. 5 and 10 picks — may be too high even for Vlade Divac and Vivek Ranadive, the NBA’s version of a buddy cop movie gone wrong.

But Fox simply doesn’t make sense for any of the teams in the top-three. The choice is too easy for Boston and L.A., and the Sixers just can’t take a non-shooting guard to play with Ben Simmons. Logically, that makes the Phoenix Suns, picking fourth, the biggest threat to take Fox before the Kings pick at five. Oh, and Phoenix may be interested in a point guard to play alongside the sharpshooting Devin Booker.

If Sacramento doesn’t want to give up an arm and a leg, it should just trade up with Phoenix. The Kings can give up the fifth pick, along with one of their young big men (Willie Cauley-Stein, Georgios Papagiannis, Skal Labissiere) to move up one spot. Phoenix gets an intriguing young prospect in whichever big guy they want along with their pick of Jayson Tatum, Jonathan Isaac, or even Dennis Smith if they’re aching for a point guard. Sacramento gets their man — Fox — and a clearer big man rotation in 2017-18. Everyone wins.

Justin Jackson falls out of the top-25

At age 22, UNC’s Jackson is one of the older prospects projected to go in the first round, but the recent track record of older players in the draft isn’t great. Buddy Hield was drafted sixth overall by the New Orleans Pelicans last year and had a quiet rookie season, though he eased into a role with the Sacramento Kings decently after being traded for DeMarcus Cousins.

Jackson wasn’t as good a college player as Hield was, though he did win ACC Player of the Year. He shot a respectable 37 percent from 3, but that will go down as he adjusts to the NBA’s longer distance. Jackson would be intriguing if there was a chance he could play as an effective stretch four immediately. But he isn’t good enough defensively to handle most NBA small forwards, let alone big men.

This isn’t to say he won’t be an effective player. There are certainly positive aspects of his game — after all, he led UNC to a title. But in such a deep draft, teams won’t jump to take a chance on an older player with less upside than Bam Adebayo or OG Anunoby.

Had Jackson played this well last season and not had to withdraw from the draft, he would have likely gone in the lottery. But this year, the draft is much better and Jackson will likely pay the price.

UCLA ties Duke and Kentucky with three players drafted in the first round, and gets a boost out of it 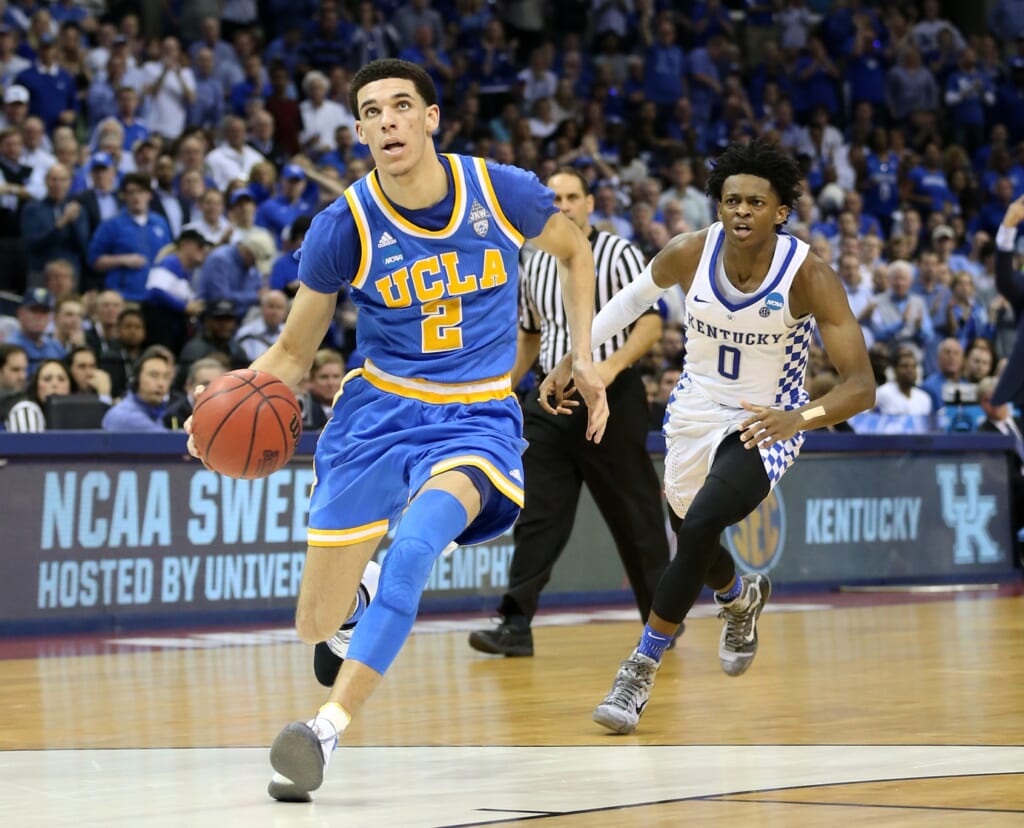 In past seasons, Duke and Kentucky have lapped the field in players drafted. When John Calipari fails to win a title for the Wildcats, draft night can be his victory lap instead — in 2015, there were four Kentucky players drafted in the lottery alone. Last year, Calipari again sent the most first round picks to the NBA.

Well, that’s about to change. Fox, Malik Monk and Bam Adebayo will all go in the first round, but there are no other superstars coming out of Lexington. As for Mike Krzyzewski’s Duke Blue Devils, there’s a bit more intrigue. Jayson Tatum, Luke Kennard and Harry Giles will all be picked in the first round barring a stunning fall from Giles, so Duke will at least tie Kentucky. But the question is guard Frank Jackson, who could go in either the first or second. Normally, Jackson would be the decider in the recruiting contest that takes place on draft night. But there’s a new player this year, and it’s UCLA head coach Steve Alford.

On top of Lonzo Ball, Alford is also sending power forward T.J. Leaf and center Ike Anigbogu to this year’s draft. Though the latter two aren’t sure things to be picked in the first round, they could easily go as high as the late-teens. In other words, the Bruins have a chance to tie Duke and Kentucky, an impressive achievement in this era, and they will.

If the Bruins pull it off, it could make a big difference to Alford’s program. Nothing matters to recruits more than boosting their draft stock, as unfortunate as that may be. Seeing UCLA on equal footing with Duke and Kentucky in a draft this good will make a big difference. Sure, the remaining Ball brothers are already heading to Westwood, but Alford can boost his recruiting classes even more if this prediction comes to fruition.