12 unheralded players set to step up in NFL Week 1 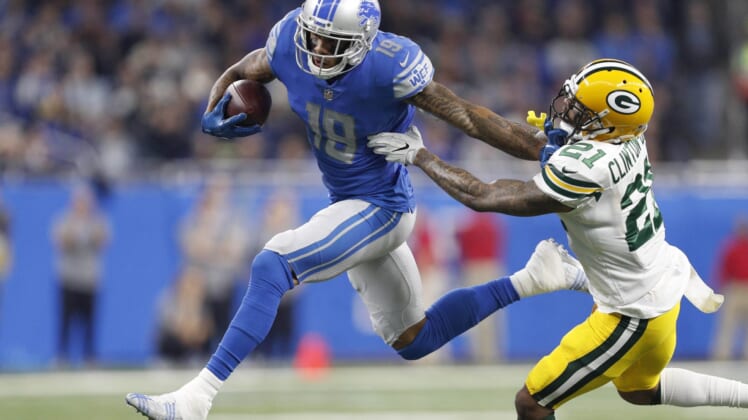 The NFL is back and the new season kicks off with an exciting slate of games in Week 1. While the marquee matchups and players draw most of the attention, plenty of unheralded players will make a name for themselves this week.

Some of the matchups are ripe for lesser-known players to thrive. Some of these players performed well under the spotlight last season, but 2018 will be the year they become household names.

Young players, many of whom suffered disappointment to start their NFL careers, will now have an opportunity to write a new script for 2018. It’s a new year and a fresh start to prove themselves at the highest level.

Here are 12 unheralded players set to step up in Week 1.

While Collins fell short of 1,000 yards in 2017, he was one of the most effective runners in football. Among running backs with 200-plus carries, the 24-year-old ranked fourth in yards per carry (4.6).

Given some of the improvements in Baltimore’s passing offense, there should be more room to run for Collins this season. Now as Baltimore’s featured back, he is set to face a Buffalo Bills defense that surrendered the fourth-most rushing yards per game last season.

In a winnable game for the Ravens, the game script plays heavily in Collins’ favor.  This could easily be a 20-plus carry, 90-plus yard performance with at least one trip to the end zone.

The No. 33 pick in the 2017 NFL Draft, much of King’s rookie season was derailed by a shoulder injury that limited his range of motion. Now he is back in 2018 as a starter for Green Bay.

While Tramon Williams will draw plenty of matchups against Allen Robinson, King should more frequently face the likes of Taylor Gabriel and Anthony Miller in Week 1. King will have the physical advantage against Gabriel. Meanwhile, second-year quarterback Mitchell Trubisky has still been inconsistent throughout the summer. The timing could be perfect for King’s first career interception and a solid night in pass coverage. 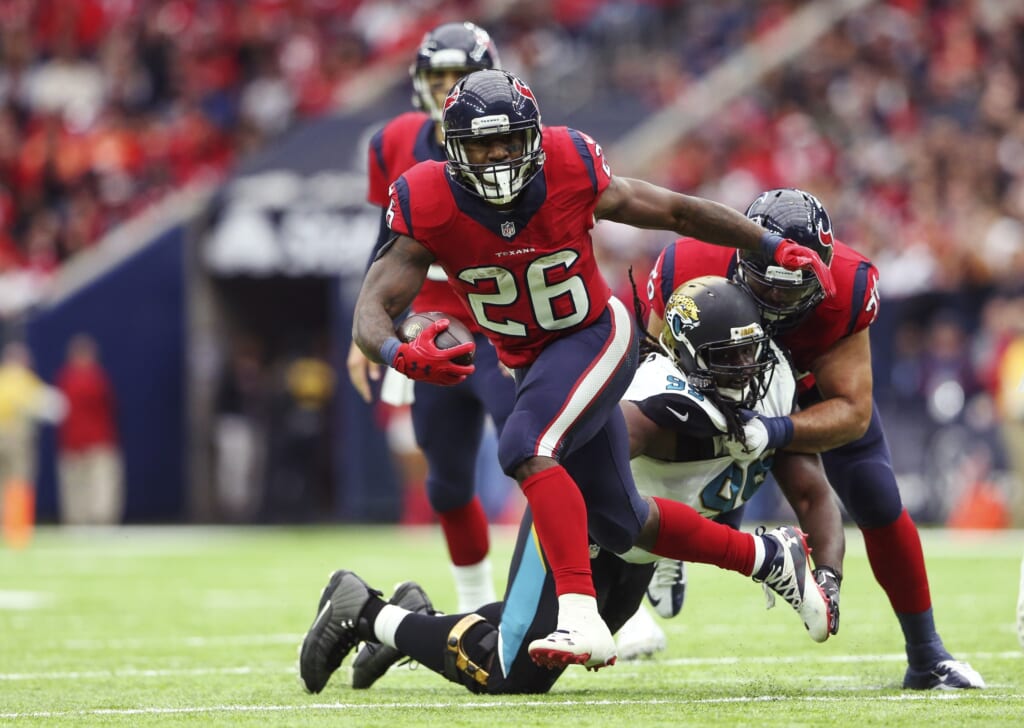 Deshaun Watson and DeAndre Hopkins deserve all the attention they receive, but Miller plays a crucial in this offense. When Watson was healthy last season, Miller played an integral role in the team’s success.

Miller will be Houston’s workhorse back while D’Onta Foreman is sidelined. While the game script doesn’t seem like it would lend itself to success against the Patriots, Miller is a capable runner and receiver. Facing a defense that allowed the second-most receiving yards to running backs (844), this is actually a favorable matchup for Miller.

Even if New England jumps out to an early lead, Miller will provide a security blanket for Watson. Given his volume of touches, there is a clear path for 90-plus total yards from Miller in Week 1 as he proves himself an underrated running back in the NFL.

After learning the ropes in Tampa Bay’s offense as a rookie, Godwin is ready to explode in his second season.

Now poised for an expanded role in 2018, Tampa Bay’s matchup against the New Orleans Saints is favorable for Godwin. The Buccaneers are underdogs and might need to to play catch up against a high-powered offense in New Orleans.

Godwin will see plenty of single coverage and he has more than enough talent to beat No. 2 and No. 3 cornerbacks. Ryan Fitzpatrick is a savvy veteran who will get the ball to the open man, so the numbers should easily come for Godwin.

After being drafted No. 9 overall by the Bengals in the 2017 NFL Draft, everything went downhill for Ross. His rookie season was so bad the team considered playing him at cornerback.

Things should be different for Ross in 2018. He showed his big-play ability in the preseason and earned more trust from the coaching staff. Now he needs more snaps. Tyreek Hill has shown speed can torch defensive backs in the NFL and Ross might even be faster than him.

This weekend he’s facing the Indianapolis Colts, who boast a secondary made up of several players that would struggle to make other NFL rosters. No one in Indianapolis can stop Ross except for quarterback Andy Dalton, but he should have better chemistry with the second-year receiver this season. 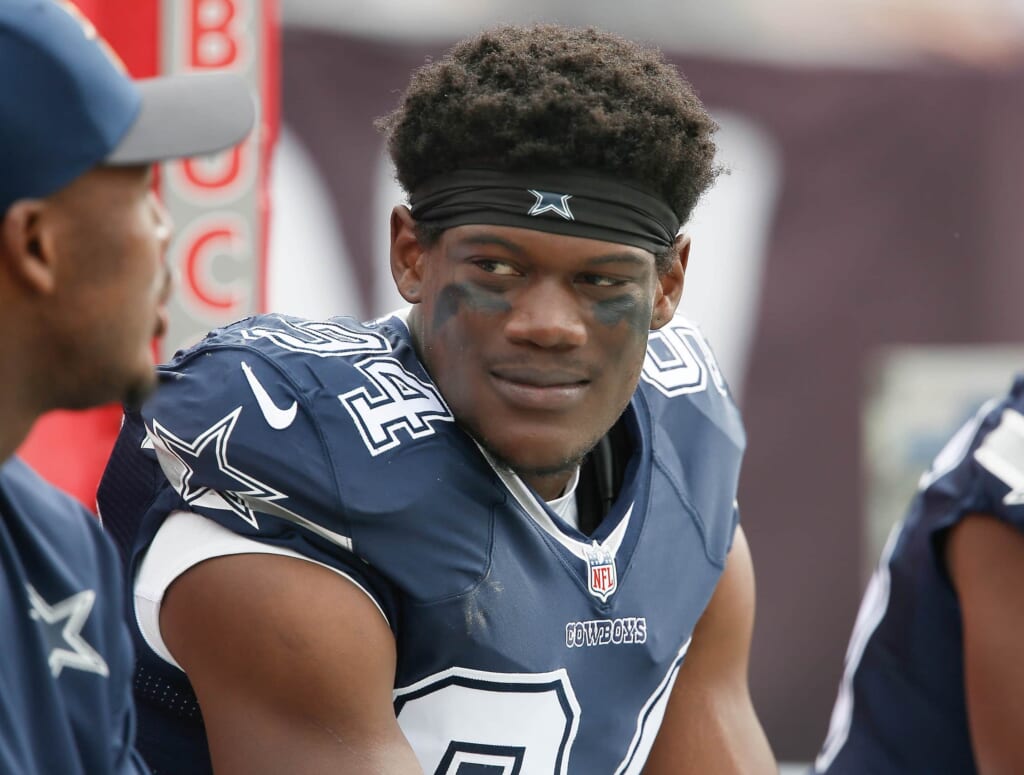 Gregory returns after being reinstated by the NFL and looks ready to create havoc for opposing teams. While the 25-year-old has just one sack in his NFL career, he can be a disruptive pass rusher whenever he is on the field.

He’ll face the Carolina Panthers on Sunday, who have arguably the worst situation at offensive tackle in the NFL. Left tackle Matt Kalil is on injured reserve and right tackle Daryl Williams will either be extremely limited or unable to play with an MCL tear and dislocated kneecap.

The Panthers have to shed help to block defensive end DeMarcus Lawrence, which will leave a backup or injured tackle on an island versus Gregory. In his first regular-season game since 2016, Gregory could return with a bang behind two sacks.

On perhaps the most underrated defense in football, Alford goes unnoticed for his excellent work opposite of Desmond Trufant. Now in his sixth season, perhaps this will be the year things change.

Alford enters his fifth season as a starting cornerback for Atlanta and is coming off a career-high 20 pass deflections last season. Now Atlanta’s defense gets to start its season on Thursday against the Philadelphia Eagles.

Down Carson Wentz and Alshon Jeffery, the Eagles will have to rely on Nick Foles throwing to Mike Williams and Nelson Agholor to get the job done. Alford is easily capable of shutting down either of these wide receivers and being a difference maker in Atlanta’s first win of the season.

This could be the year it all comes together for the receiver some affectionately call “Babytron.” A third-round pick in 2017, Detroit used Golladay’s rookie season to develop but he still averaged 17 yards per catch.

Now in his second season, the 24-year-old is set for a major role increase in 2018. He saw more reps in two-receiver sets during the preseason and developed more chemistry with Matthew Stafford.

Detroit’s matchup against the New York Jets is a favorable one on Monday Night Football. Golden Tate and Marvin Jones will remain the primary targets in this passing attack, but Golladay offers big-play upside and a go-to target in the red zone.

Outside of the stars, tight ends don’t receive enough love from NFL fans. While Seals-Jones is not a name many know outside of Arizona, this could be the start to a season where he changes that.

An undrafted free agent in 2017, Seals-Jones worked his way up from the practice squad to Arizona’s active roster. He saw the field extensively as a rookie and while he only finished with 12 receptions, the 23-year-old averaged 16.8 yards per catch.

A converted receiver, Seals-Jones showed the ability to rack up plenty of yards after the catch in 2017. Now after a full offseason and training camp working with Arizona’s starting offense, he is ready for a more expanded and consistent role in 2018. Facing a Washington Redskins defense that struggles to cover tight ends, get ready for Seals-Jones to start the year off on a high note. 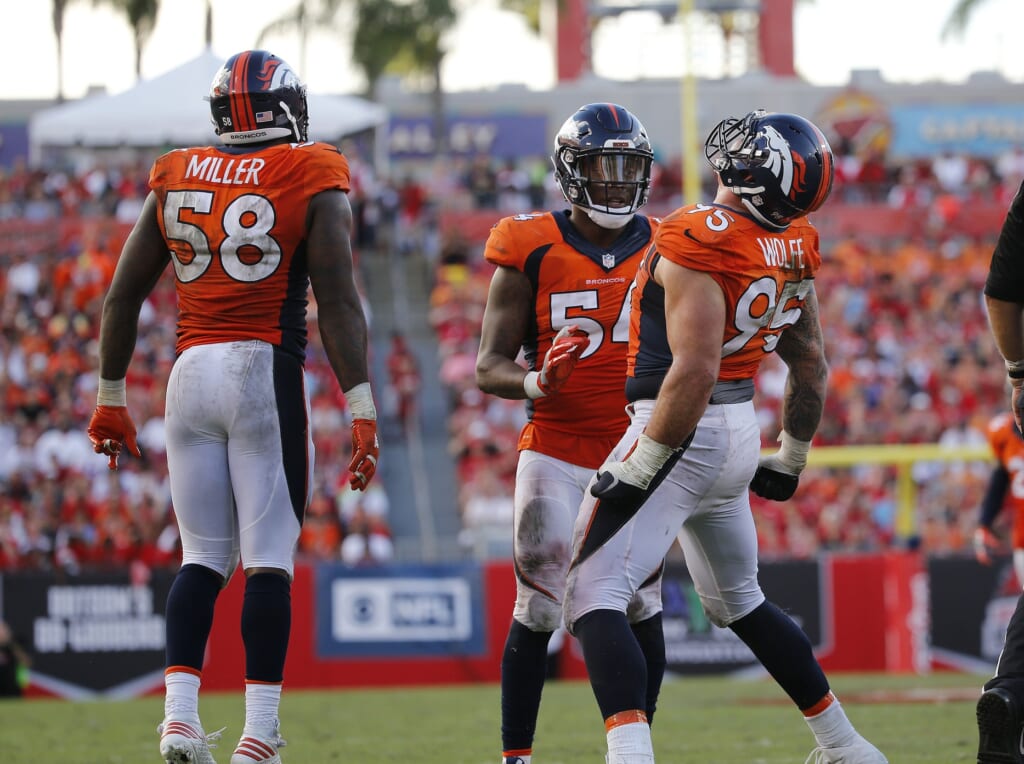 When Denver drafted Bradley Chubb, many raved about how much he would learn from All-Pro pass rusher Von Miller. Wolfe could also be a major beneficiary of the pass-rushing duo.

The 28-year-old has experienced nerve pain in his neck for years, but the issue was reportedly fixed this offseason. Now healthy and with a fearsome pass rusher behind him, Wolfe could cause a lot of problems for offensive tackles this season.

It all starts on Sunday against the Seattle Seahawks, who have a notoriously porous offensive line. Seattle will already have its hands full with Chubb and Miller, which could lead to easy opportunities for Wolfe to rack up some hits on Russell Wilson.

While Keenan Allen is the focal point in the passing attack, Williams serves as the big-play threat in this offense. The 26-year-old finished fifth in the NFL in 2017 in yards per catch (16.9) and is facing a great matchup in Week 1.

A battle against the Kansas City Chiefs secondary, which has one of the worst secondaries in the AFC, is extremely favorable. While Kansas City focuses its attention defensively on Keenan Allen and stopping Melvin Gordon, Williams will be free to exploit the secondary down the field.

Given the Chiefs’ inconsistent pass rush, Philip Rivers should have plenty of time to lob a few deep balls and give Williams some big-play opportunities.

Chicago’s addition of Khalil Mack benefits the entire defense. In its matchup on Sunday Night Football against the Green Bay Packers, we’ll focus on Hicks.

Green Bay’s right tackle Bryan Bulaga will often face a decision between Mack and Hicks. The attention will go towards the All-Pro pass rusher, which will put an inferior blocker against Hicks

Given the weakness of Green Bay’s interior offensive line, this further plays in Chicago’s favor. When defensive coordinator Vic Fangio’s stunts are factored in, the duo of Mack and Hicks can create even more problems for Green Bay. Don’t be surprised if this is the start of a Pro Bowl season for Hicks.