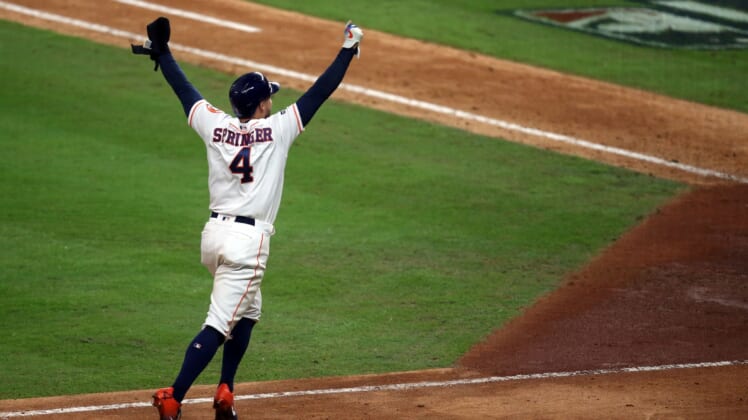 After a thrilling MLB season that started back on March 28, we’ve finally arrived at the pinnacle of America’s pastime. The 2019 World Series is here and it promises to be an outstanding clash between the Washington Nationals and Houston Astros.

It seems unbelievable that Washington made it here. From a 19-31 record on May 24 with manager Dave Martinez’s job on the line to a rapid transformation that led to an NL pennant. Now the Nationals sit four games shy of winning their first World Series.

Of course, the Astros stand in their way. Houston entered the postseason as the favorite to win it all and are now coming a game-winning home run by José Altuve.

This year’s World Series will be a clash between two all-time playoff rotations. Future Hall of Famers will go toe-to-toe on the mound with a shot to add a championship to their resumes.

Now let’s take a look at the 12 burning questions that will capture this series, define legacies and ultimately dictate who will be the World Series champion.

A team that everyone slept on coming into the postseason made it this far with an incredible run by a player many forgot about. Kendrick’s epic grand slam won the NLDS and then he won the NLCS MVP in Washington’s sweep. He’ll face tougher pitching in the World Series. However, he could be on one of those unstoppable hot streaks that everyone will remember from a championship run for years to come.

A leadoff hitter sets the tone for the entire lineup. That’s what makes Springer so pivotal in this series. He’ll enter Tuesday with a .152/.235/.283 slash line in 46 at-bats. He’s is the same player, though, who posted a 1.286 OPS in the 2018 postseason and won World Series MVP in 2017. Runs will be at a premium this series, so Springer could easily decide who celebrates when it’s all over.

Will Max Scherzer shine in a career-defining moment?

Scherzer will take the mound for Game 1 with a future spot in Cooperstown guaranteed. This series gives him a chance to put his name among the game’s all-time greats and to be a hero in Washington for life. We’ve seen Scherzer turn it up in October with one run allowed and 18 strikeouts across 14 innings in his past two starts. If he keeps it going and the Nationals win their first World Series, it’ll be an all-time moment that earns Scherzer a statue at Nationals Park.

Which version of Zack Greinke will we see?

In a series that could potentially see five pitchers elected to Cooperstown one day, Greinke is the biggest question mark. After allowing six runs in his lone ALDS start, Greinke surrendered 10 hits and four walks in two ALCS outings. We’ve routinely seen him struggle in October, demonstrated by his 4.44 ERA in 81 career innings, but everyone knows he’s capable of greatness. Greinke discovering his best could give Houston everything it needs to win a title, but anything else put that in jeopardy.

Can the Nationals trust their bullpen?

Washington’s reliance on its top pitchers was all it needed in the NLCS. Sean Doolittle and Daniel Hudson shut things down in the first two games and the Nationals dominated the final two. It will be a different story in the World Series. Houston’s lineup is vastly better than the St. Louis Cardinals and that means Washington faces tighter situations after the sixth inning. There will be moments in this series when the Nationals need their middle relievers in crucial moments. Given their lack of exposure this October, that could be a problem.

Where did the phenom version of Yordan Álvarez go?

Álvarez became baseball’s breakout star the moment he reached the majors in June. Houston’s slugger hit 27 home runs with a 1.067 OPS and 78 RBI in only 313 at-bats. October came and his bat suddenly froze with a .171 batting average, .471 OPS and 17 strikeouts in 41 at-bats. Álvarez still offers the potential to get hot at any moment with his game-changing power. If he doesn’t, Houston might be better off when it loses the designated hitter in Washington.

Washington spent $65 million on its co-aces this year and signed No. 3 starter Patrick Corbin to a $140 million contract in the offseason. Yet, Sánchez is October’s X-xactor and only makes $8 million. He nearly threw a no-hitter in Game 1 of the NLCS and heads into the World Series with five hits and one run allowed in 12.2 innings. We’ve seen Houston’s lineup struggle with off-speed pitches this offseason and that’s Sánchez’s specialty. While Sanchez won’t receive the recognition he deserves, he can be the player who decides this close series.

Cole couldn’t ask for a better year going into free agency. He elevated his game to a historic stratosphere in 2019 and that’s continued in the playoffs. After recording a 2.50 ERA with a record-breaking 39.9 percent strikeout rate in the regular season, Cole is dominating in October with a 0.40 ERA and 38.1 percent strikeout rate in 22.2 innings. He’ll take the mound in Game 1 and could push to start in Game 4 and a potential Game 7. If Cole’s historic stretch continues, he’ll win the World Series MVP and MLB’s best pitcher will be paid like it when the celebration ends.

Can Juan Soto take his game to the next level?

This isn’t a typical situation for a 20-year-old to be in. A majority of Soto’s peers reached Double-A ball this year. Meanwhile, Soto will be in the heart of Washington’s World Series lineup. While Soto’s bad cooled off in the NLCS with a .485 OPS, he still has seven RBI in October. We’ve seen him come through in crucial moments and now he is playing in the biggest series of his life. Soto will turn 21 on Game 3 of the World Series, putting him in position for an epic celebration if he plays to his star potential.

Who steps up in Houston’s bullpen?

This is Houston’s biggest problem. For as dominant as its starting pitching can be, the bullpen can undo it all in minutes. Closer Roberto Osuna has been shaky in save situations, including his blown save in Game 6 of the ALCS, and fellow All-Star reliever Ryan Pressly is essentially pitching on one leg. Josh James can bring some electricity and length out of the bullpen, but his command can get erratic at the worst times. The Astros need all three of them to bring their best stuff right now, or Washington’s penchant for late-inning magic will crush them.

Is too much rest a bad thing?

The Nationals weren’t complaining following the NLCS sweep and nearly a week off to celebrate and prepare for this series. It’s still difficult to look past the risk too much rest can have on a team. They will have gone six days without competing in a playoff atmosphere. Furthermore, Washington hasn’t played a championship-caliber opponent since the NLDS. There’s plenty of talent on the roster, but rust could result in a slow start and that’s even more dangerous without home-field advantage.

Baseball fans that love pitching duels are in for a treat. Houston and Washington come in with unprecedented playoff rotations. The 2019 World Series is even greater because both lineups have some of the game’s best, young stars. Most of the country will be rooting for the Nationals and they have the starting pitching to win their first World Series.

However, Houston comes in with the most talented team in baseball, more experience and played tougher opponents to get here. There’s a lot in the Astros’ favor, including home-field advantage, which deservedly makes them the favorite.