12 best September CFB games of the past decade 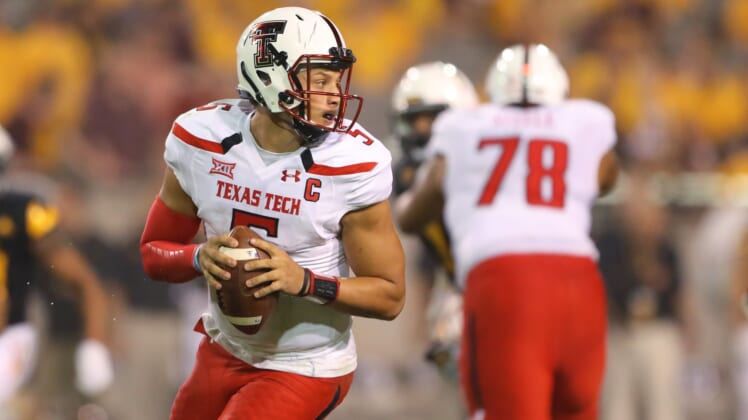 As the 150th season of college football kicks off with teams across the country taking the field for their first game of the 2019 season, it allows the chance to reflect on some of the great moments along the way.

College football fans witnessed some incredible games in the sports’ long history. As athletes get faster and offenses become more innovative, the game is improving and has created moments no one can forget.

While the focus on prime-time games and huge matchups is usually later in the season, history has shown that September always offers plenty to enjoy. Here are the 12 best college football games in September over the past decade.

A decade after Appalachian State pulled off one of the greatest upsets in football history, it nearly delivered another stunning victory in 2018. The Mountaineers jumped out to an early 10-7 lead. Then, after stumbling into a 31-17 deficit in the fourth quarter, they came back to take a 38-31 lead with less than two minutes remaining.

Nittany Lions quarterback Trace McSorley refused to let his team be the next giant to lose to App State. He led a seven-play drive down the field to tie it with 42 seconds left. Penn State would win it in overtime, avoiding chaos to open the season.

There have been a few moments in recent years when everyone thought Texas was “back.” No game reflects that more than when the unranked Longhorns stunned the Fighting Irish in a double-overtime thriller back in 2016.

Texas’ running game dominated with 237 rushing yards and five touchdowns, including three from Tyrone Swoopes. The Longhorns nearly blew the game by blowing a 17-point lead in the second half. Fortunately, Swoopes danced his way into the end zone, and the fans could finally celebrate something real.

While Rosen might have experienced some down moments with the Bruins, UCLA’s fan base can always remember his jaw-dropping comeback against the Aggies. When the Bruins trailed 44-10 with four minutes remaining in the third quarter, no one could have imagined what would happen next.

Rosen answered with three touchdown passes in the fourth quarter to pull the game within a touchdown. He led a drive starting on UCLA’s 34-yard line and capped it off with some trickery on a fake spike 10-yard touchdown pass to Jordan Lasley for the game-winning score with 43 seconds left. Just the type of performance that puts a quarterback on the NFL’s radar.

TCU reigned near the top of the football world and represented the state’s lone powerhouse program just a few years ago. It entered Week 4 in 2015 as the No. 3-ranked team in the country, and an in-state fight against Texas Tech put it all on the brink.

Patrick Mahomes showed glimpses of his potential with a 392-yard, three-touchdown performance, leading to a 35-33 lead midway through the third quarter. Both offenses kept matching touchdowns until TCU’s Trevone Boykin threw his fourth touchdown pass with 23 seconds left for a 55-52 win to keep his team undefeated.

Before Kyler Murray’s Heisman Trophy campaign and Oklahoma’s dream season started rolling, everything nearly crumbled apart against the Black Knights. Army’s triple-option attack gave the Sooners more than they could handle, and its defense stepped up as well.

Both teams traded touchdowns throughout the day and Oklahoma never held more than a one-score lead. A potential upset started brewing when Andy Davidson scored a three-yard touchdown to tie it at 21 in the third quarter. Fortunately for the Sooners, Murray came up clutch in overtime with a 10-yard touchdown pass for the lead, and their defense forced a stop to seal the win.

More than a decade after USC’s dream of completing its dynasty in the Rose Bowl was brought down by Vince Young and the Longhorns, the program finally got its shot at revenge in 2017.

While the matchup came in a regular-season game with players and coaches long removed from the past, the clash still brought plenty of excitement. USC could never get its running game established and Sam Darnold threw two interceptions, but the Trojans fought all night.

After exchanging touchdowns in overtime, kicker Chase McGrath drilled a 43-yard field goal to win it. The fan base finally had a reason to smile, though the season didn’t end quite as nicely as everyone expected.

Few top-25 matchups in recent memory are as memorable as this stunning September shootout. Mountaineers quarterback Geno Smith and Bears quarterback Nick Florence put on a show through the air in a game that saw 70 total points scored in the first half.

The game itself was stunning to watch, and the statistics are simply absurd. West Virginia and Baylor combined for 1,507 total yards, 67 first downs and 133 points scored in four quarters. A 656-yard, eight-touchdown performance from Smith, two receivers (Terrance Williams, Stedman Bailey) with 300-plus receiving yards and only one combined turnover between the two programs. Simply a dream for fantasy fans.

There’s a moment in every quarterback’s career when they have the opportunity to prove themselves as an impact player. College football fans watched Dwayne Haskins thrive during that moment in Week 5 last season.

A battle between two top-10 teams held weight for potential College Football Playoff rankings. Penn State looked poised to climb with a 26-14 lead and eight minutes left in the game. Haskins stepped up in those final minutes with big throws and even bigger drives, including a 96-yard drive that led to the go-ahead score, to grab a crucial 27-26 win on the road.

A year after Nick Saban’s program saw its pursuit of perfection end by losing to Ole Miss for the second consecutive season, the Crimson Tide rolled into Oxford seeking redemption. Instead, the Rebels jumped out to a 24-3 lead late in the second quarter. It appeared Saban’s kryptonite was discovered and Alabama would run into another early loss to Ole Miss.

Alabama rediscovered itself quickly with an offensive touchdown followed by an 85-yard punt return touchdown to cut the deficit to seven. It dominated both sides of the ball in the second half with two defensive touchdowns and two rushing scores to take a decisive 48-30 lead and ultimately walk out with a 48-43 win to snap the streak.

When most fans come across a team leading 31-13 entering the fourth quarter, it’s an immediate indicator to change the channel and find another game. Any fans who looked away from this conference battle in 2014 missed a memorable moment.

The Wildcats worked quickly to cut the 18-point deficit by scoring 10 unanswered points in less than two minutes. California answered and seemed to quite any hopes for a comeback by taking a 45-30 lead with five minutes remaining. Somehow, the Wildcats climbed back in it with two touchdowns in less than a minute. Arizona got the ball back down by two and wide receiver Austin Hill made a miraculous catch in the end zone to cap off a 36-point fourth quarter, and a stunning win.

RGIII’s 2011 Heisman Trophy run started during his opener in a matchup against a TCU squad that many expected to shine. Baylor’s offense had potential, but it wasn’t supposed to be a great match against the Horned Frogs.

Fans saw in the opener that RGIII was a different force at the quarterback position. He went toe-to-toe with TCU’s offense and beat it behind a stunning 77.8 percent completion rate, 359 passing yards, five touchdowns and 38 rushing yards. Most importantly, he helped set up the drive for the game-winning field goal and a 50-48 win that served as a spark for the team’s 10-3 season.

Fans will always remember the head-to-head matchups between Saban’s defense and Johnny Manziel. A stoic coach with a hard-nosed defense against a brash quarterback who brought emotions out of everyone watching him play. Texas A&M’s 2012 win over Saban was great, and the sequel was even better.

Manziel lived up to his reputation and caused fits for Alabama’s defense. Texas A&M started hot with a 14-0 lead midway through the first quarter. Alabama responded with 28 unanswered points and a 14-point lead at the half.

When the Aggies trailed by 21 entering the fourth quarter, Manziel showed off his Heisman-worthy talent with two touchdown passes to cut Alabama’s lead. Ultimately, it was Alabama’s offense that stood up with its sixth offensive touchdown to seal the win to beat Johnny Football.