NFL teams are in the process of finalizing their big board with the draft set to take place in less than a week. More so than in any other draft in recent history, things seem to be completely up in the air. Picking No. 1 overall, the Cleveland Browns could take any one of four different quarterbacks available to them.

Meanwhile, we’re likely going to see some star players traded during the three-day event in Dallas. That could include Pro Bowl performers Odell Beckham Jr. and Earl Thomas. In keeping with this theme, here’s 11 bold predictions for the 2018 NFL Draft. 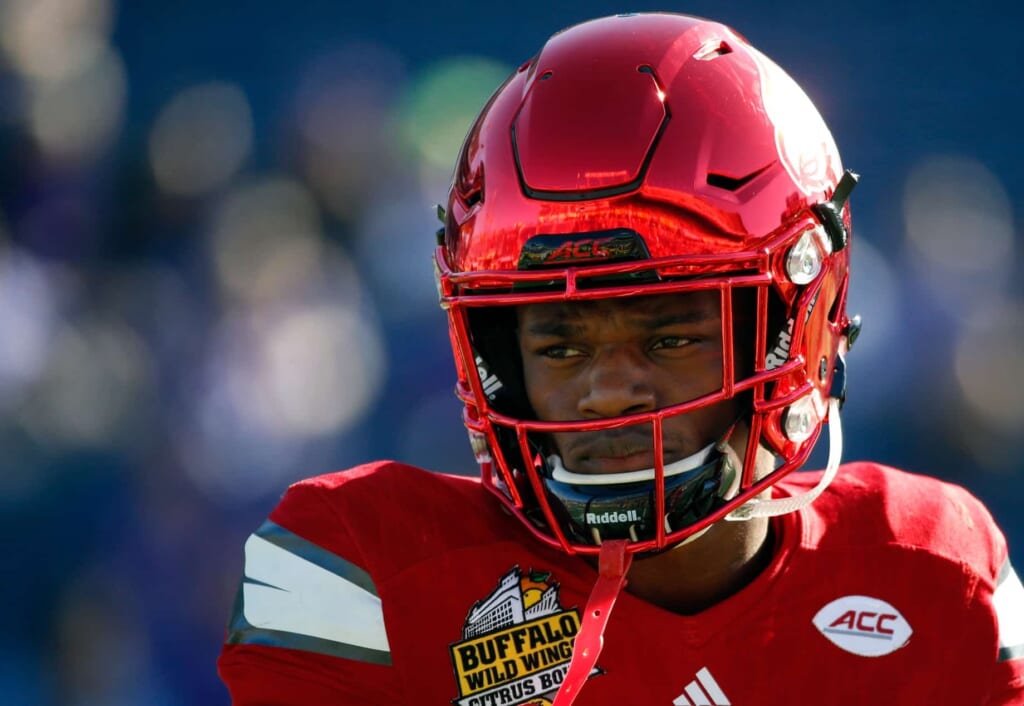 We already know that Josh Rosen, Sam Darnold, Baker Mayfield and Josh Allen are all going to go within the top-10 picks. That’s not even really in question. We just don’t know exactly what the order will be, especially with Cleveland boasting the top pick.

Though, there’s going to be a fifth quarterback selected in the top 10. His name is Lamar Jackson and he’s picking up steam heading into the annual event. The Los Angeles Chargers and New England Patriots are two teams picking outside of the top 10 that could potentially make a move up for Jackson. If that happens, this will be the first time since 1999 that five quarterbacks go off the board within the first 12 picks.

Saquon Barkley falls outside of the top five

At this point, experts around the NFL Draft world seem to think that Barkley will either go No. 2 overall to the New York Giants or slip only to the Cleveland Browns with the fourth pick. We’re here to throw some water on that fire. Is Barkley a generational back like we’ve seen with Ezekiel Elliott and Todd Gurley in recent years? Yes. That’s not really in question right now.

The issue here is that the 2018 NFL Draft is going to be top heavy at quarterback. When Elliott went No. 4 overall back in 2016, only two quarterbacks (Jared Goff and Carson Wentz) were selected within the top-25 picks. Back in 2015, when Gurley found himself as a top-10 pick, only two quarterbacks went within the first two rounds. Teams are going to be jockeying to move up for signal callers, meaning Barkley will likely see himself fall to the bottom end of the top 10 or out of the top 10 completely.

If Barkley is indeed looking at a slide to the bottom half of the top 10, we’re likely going to see a run of running backs (pun intended) throughout the remainder of the first round. That will include Derrius Guice becoming the second ball carrier off the board. But we’re here to say that at least one more — potentially even two running backs — will find themselves as Round 1 picks.

Looking at the bottom half of the first round, the Seahawks, Lions, Patriots and Eagles are all in need of help at running back. In Jones, said team would be adding a multi-dimensional back that can handle receiving duties out of the backfield. In today’s pass-first NFL, that’s become somewhat of a necessity. Jones is that guy. And one of those four teams will make him a Day 1 pick.

Earl Thomas traded to the Cowboys 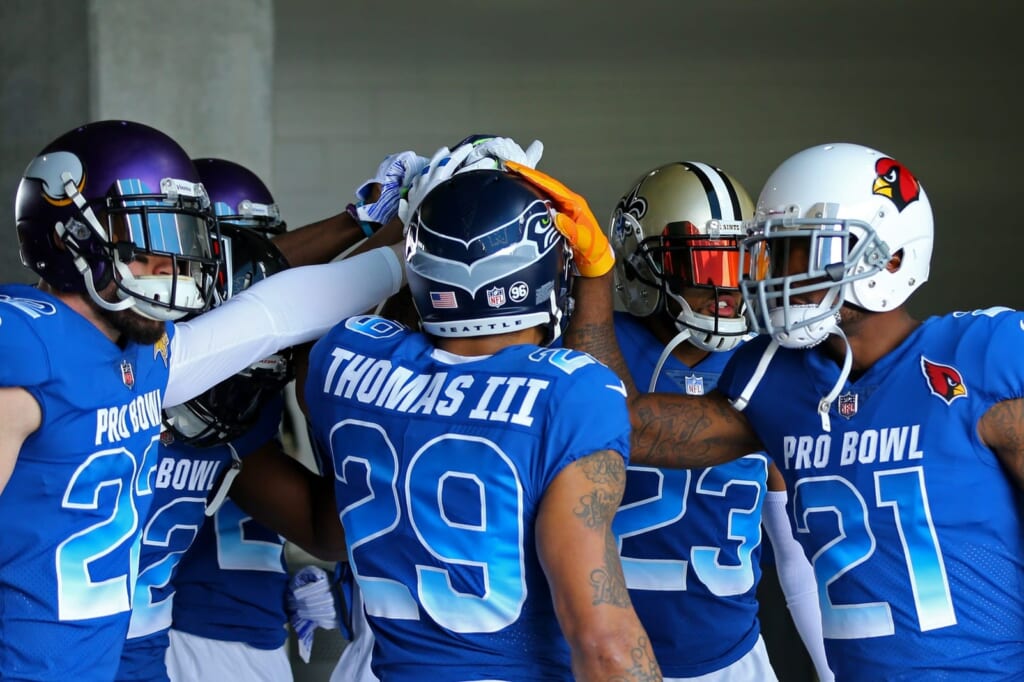 This is actually becoming more of a likelihood by the day. Dallas released Dez Bryant, saving $8.5 million against the cap. It then decided to move safety Byron Jones back to his natural cornerback position, creating a major hole at safety in the process. Let us not forget about Thomas indicating in a public manner that he wants to play for his hometown Cowboys and the Seahawks showing an obvious interest in trading him.

Add in the fact that Seattle doesn’t boast a pick in either the second or third round of the draft, and the writing seems to be on the wall here. Something akin to the Cowboys yielding their second-round pick (50th overall) and change to the Seahawks for Thomas seems to make sense. Expect it to happen during the coming three-day draft in Dallas.

If we’re talking about pure athletic ability, Key would likely be one of the top-five guys off the board. Unfortunately for the former LSU standout, there’s a lot more we have to take into account when assessing his draft stock. Here’s a guy that underwent shoulder surgery following the 2016 campaign only to deal with further injuries in his final season in Baton Rouge. In between that, Key took a leave of absence from the Tigers that still remains a major topic of controversy.

At a time when NFL teams are forced to apply more of an onus on character, Key himself is a true wild card. Depending on how the interview process played out, that’s likely going to lead to a dramatic drop for Key come draft time. We’re looking at him being nothing better than a fourth-round pick unless a team in desperate need of his pass-rush ability takes a flyer on Key before then. We’re not expecting that to be the case.

Picks four through six are all traded

We’ve read the reports that Cleveland, Denver and Indianapolis, picking four-through-six respectively, are looking to trade down. We’ve also read the reports that quarterback-needy teams selecting outside of the top 10 are looking to move up. Heck, the New York Giants might move down from the second spot with a team in desperate need of a quarterback.

This is going to lead to a drama-filled opening to the NFL Draft in less than a week. The expectation here has to be that both Cleveland and Denver will trade down. And if a top-flight quarterback is there at six, the Colts will make their second move down of the draft. It’s in this that all eyes should be on the Los Angeles Chargers, Buffalo Bills and Arizona Cardinals ultimately picking somewhere in the four-through-six range.

Patriots work their way into the top 10 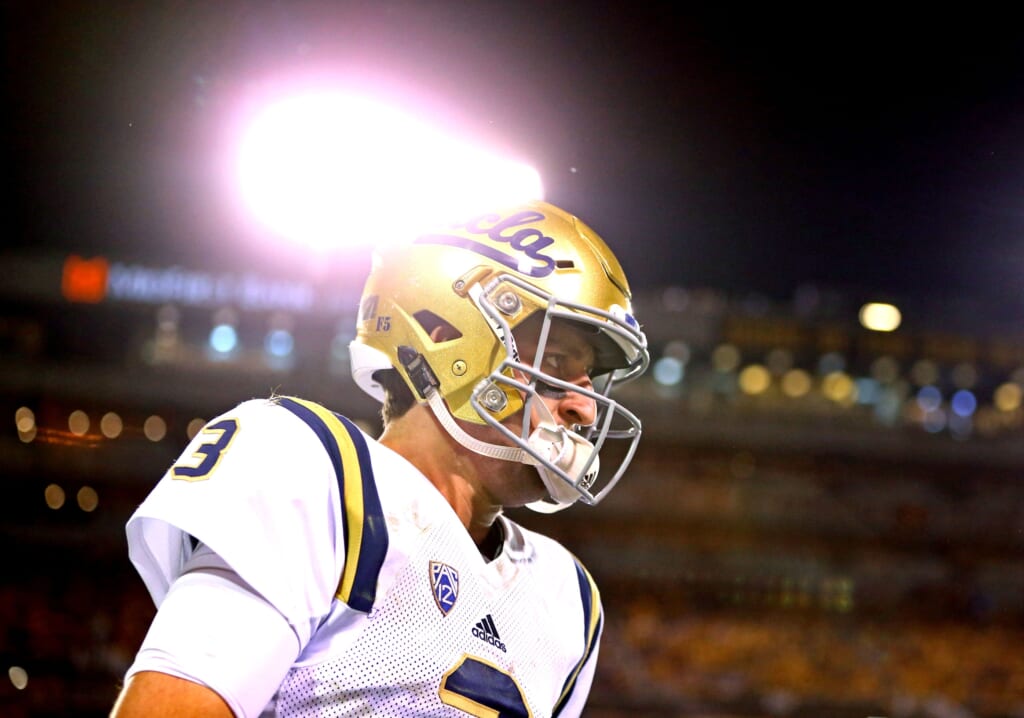 After exhausting nearly their entire draft inventory on trades last year, the Patriots seem primed to make a major run in the 2018 NFL Draft. By virtue of the Jimmy Garoppolo and Brandin Cooks trades, New England has two picks in each of the first two rounds of this year’s draft. Immediately after the Cooks deal, speculation came about that the Pats might be eyeing a trade up for Josh Rosen as Tom Brady’s heir apparent. More recently, New England has been linked to former Heisman winner Lamar Jackson. Where there’s smoke, there is certainly fire.

We’re going to boldly predict that New England moves up to No. 9 overall with San Francisco. At that point, either the Pats will stay firm at nine or move up even more for the quarterback of their liking. The time has come for Bill Belichick to find a successor to Tom Brady, especially after the entire Garoppolo drama. Should the Pats see one or two of their targets fall to nine, another trade with San Francisco will be in the cards.

Speaking of trades, San Francisco has not been afraid to pull the trigger since Kyle Shanahan and John Lynch started running the ship last year. In the 2017 NFL Draft, this squad made four trades. It then exhausted a second-round pick to New England for the above-mentioned Garoppolo. We’re going to predict that Lynch and Co. pull off another blockbuster deal. Heck, two blockbuster deals.

It starts with the 49ers trading down with New England from ninth overall for the Patriots’ two first-round picks and potentially more. San Francisco will then turn one of those first-round picks and more change into Odell Beckham Jr. in a deal with the New York Giants. It just makes too much sense. The idea of teaming OBJ up with Garoppolo has not been lost on the 49ers’ front office. With the draft capital, this up-and-coming squad could make a strong play for Beckham while meeting New York’s asking price.

No wide receiver selected in the top 15

Calvin Ridley and Courtland Sutton are the only two receivers this scribe projects to be first round locks. Even then, others conclude that a weak draft class at wide receiver will see a bare opening round market. Ridley is going to turn 24 during his rookie campaign. For comparison’s sake, he’s only two years younger than Odell Beckham Jr. On the other hand, some believe Sutton doesn’t have the ability to separate at the next level — potentially making him nothing more than a possession receiver in the NFL.

It’s also important to take into account team needs. Of those picking in the top 15, most will view receiver as both a reach and a pick that doesn’t necessarily take need into account. All of this will lead to the most baron first round of the draft since Demaryius Thomas and Dez Bryant were selected 22nd and 24th overall respectively back in 2010. And as with that draft, it will mean value for squads picking towards the back end of Round 1 and early in Day 2.

Surprise team selects quarterback in Round 1 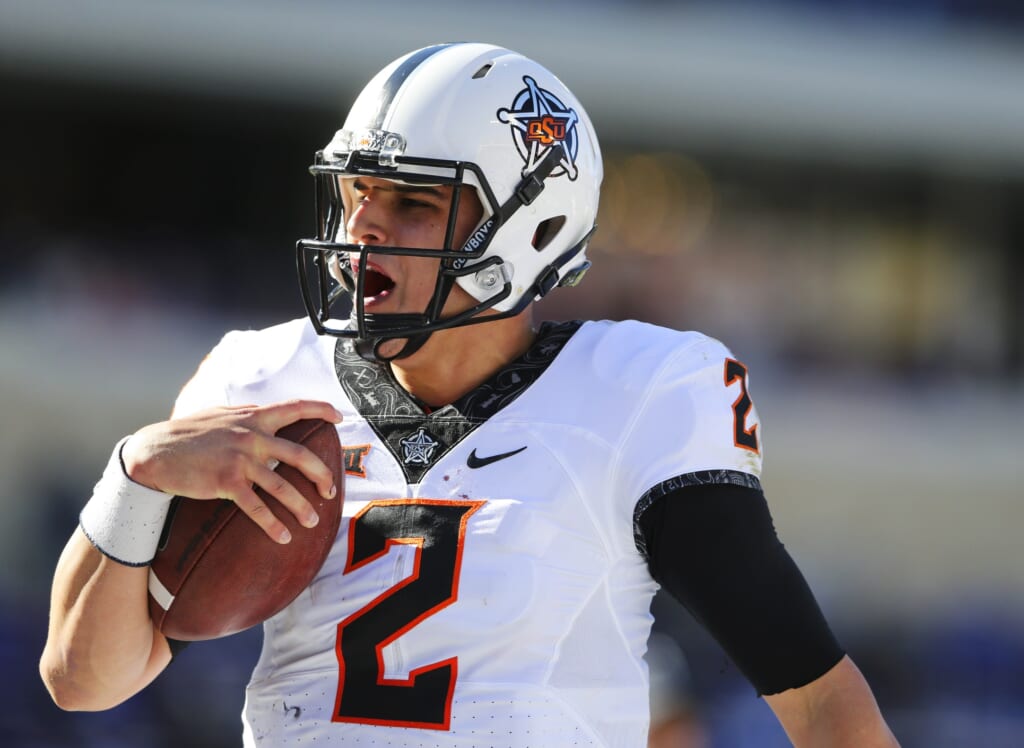 At this point, we would not be surprised if the New Orleans Saints, New England Patriots and Los Angeles Chargers looked quarterback despite still boasting Hall of Fame signal callers. The tea leaves seem to be blowing in that direction. Though, there’s one more team with a rock solid franchise signal caller that we’re projecting will go quarterback in Round 1. Said team is the Pittsburgh Steelers, who will soon look to find a replacement for the aging Ben Roethlisberger.

What makes this prediction so bold is that Pittsburgh isn’t going to target one of the top four or five quarterbacks in the class in a potential trade up. Instead, GM Kevin Colbert and Co. will swoop in and add a Big Ben 2.0 in the form of Mason Rudolph. The measurables are comparable in nearly every way here, with both signal callers standing at 6-foot-5 and weighing north of 240. What better quarterback for Roethlisberger to groom than his carbon copy?

It would be to the chagrin of Browns fans the world over, but we’re going to predict that this long downtrodden franchise opts for Wyoming’s Josh Allen with the first overall pick in next week’s draft. The team has been linked to this erratic passer for some time now, with general manager John Dorsey recently hinting that Allen might very well be the top pick in the draft.

Is this a pick we would make? No. Allen has way too many question marks to even be considered a first-round pick. He’s a project. There’s nothing about his game besides a prototypical build and a strong arm that leads us to believe the former Cowboys’ star will be a franchise quarterback. Despite this, Cleveland appears to be smitten with him. And in reality, it could lead to another near fatal mistake for a Browns team that simply can’t get it right at quarterback.