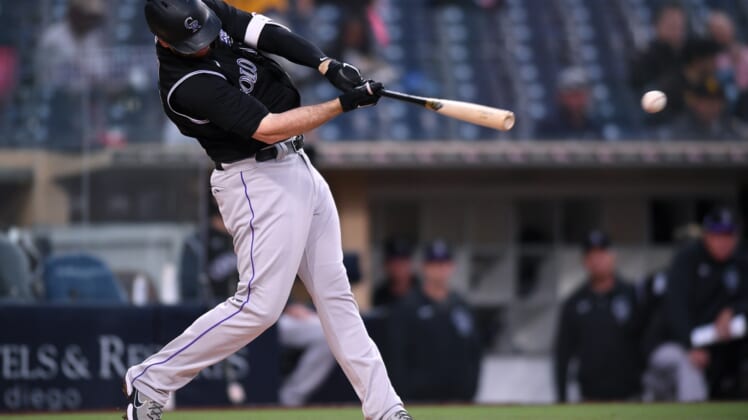 Jorge Mateo scored from third on a Daniel Bard wild pitch in the bottom of the 10th inning Tuesday night to give the San Diego Padres a 2-1 victory over the visiting Colorado Rockies.

The speedy Mateo opened the 10th at second, and he immediately moved to third on a sacrifice bunt by pinch hitter Brian O’Grady.

Bard (1-3) threw two quick strikes to Padres leadoff hitter Trent Grisham. Then with the count even at-2-2, Bard’s high breaking ball ticked off the glove of catcher Dom Nunez and reached the backstop. Mateo slid home before Nunez could attempt a throw.

Pierce Johnson (1-1) struck out three in a scoreless top of the 10th and got credit for the Padres’ fifth consecutive win.

San Diego closer Mark Melancon worked his way out of two-on, no-out and bases-loaded, two-out jams in the top of the ninth, striking out Nunez for the last out.

The Rockies were 1-for-13 with runners in scoring position Tuesday and have scored just one run on 10 hits in the first two games of the series. Colorado is now 2-16 on the road this season.

Starting pitchers Austin Gomber of the Rockies and Blake Snell of the Padres exited with the score 1-1 after six innings. Both pitchers allowed five hits and a walk. Snell had 11 strikeouts in a 97-pitch outing while Gomber fanned seven in his 96-pitch effort.

Both teams scored in the second.

C.J. Cron opened the top of the second with a single and moved to third on a double by Charlie Blackmon. Josh Fuentes then doubled into the right field corner, scoring Cron, but Blackmon, who was running gingerly on a groin injury, could advance only to third.

Snell then started a run of six straight strikeouts, getting Yonathan Daza, Elias Diaz and Gomber to strand Blackmon and Fuentes in scoring position.

The Padres tied the game in their half of the second. Tommy Pham drew a leadoff walk, advanced to third on a double by Ha-Seong Kim and scored on Jurickson Profar’s groundout to second.