10 young NBA stars destined for the Hall of Fame 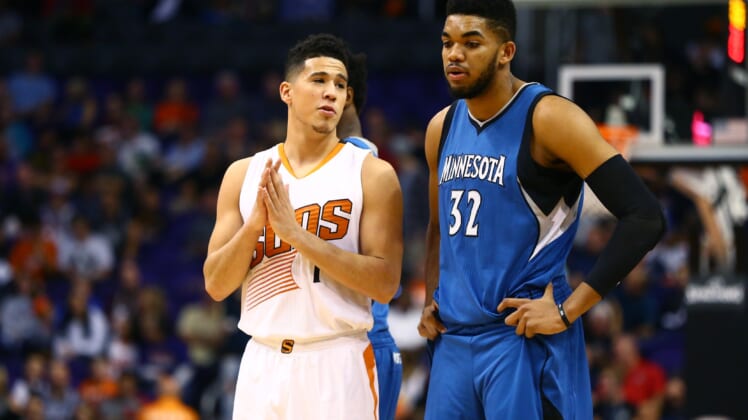 LeBron James. Stephen Curry. Kevin Durant. James Harden. These are some of the names already guaranteed to be first ballot Hall of Famers. They don’t need to do another thing in the NBA in order to join that elite club.

Though, the modern version of the Association also includes a new generation of stars that seem destined for Springfield.

Was Luka Doncic’s rookie season with the Dallas Mavericks a harbinger of things to come? Can Joel Embiid overcome an injury-plagued early career to become an all-time great? These are among the 10 young NBA stars destined for the Hall of Fame.

Still only 24 years old, it’s absolutely amazing to realize what the Greek Freak has already done throughout his career. He was a major product as a rookie back in 2013-14, averaging just 6.8 points on 41% shooting. Since then, Giannis has been on an upward trajectory few before him have ever seen.

This past regular season saw the MVP candidate average 27.7 points, 12.5 rebounds, 5.9 assists, 1.3 steals and 1.5 blocks per game. He also shot an otherworldly 58% from the field. Not even in his prime, the sky is the absolute limit for the game’s most ridiculous talent.

When on the court, Embiid has proven himself to be among the most-talented big men in the modern history of the Association. The issue here is injuries. He missed his first two seasons with knee problems and has not played more than 64 games in any season since. The hope here is that injuries don’t derail what could be a dominant career

Embiid, 25, averaged 27.5 points, 13.6 rebounds and 3.2 assists on 48% shooting this past regular season. Those numbers are similar to Shaquille O’Neal and Kareem Abdul-Jabbar in their heydays. Let that sink in for a second.

Primarily because he plays for a downtrodden Suns team, the 22-year-old Booker is rarely talked about as one of the NBA’s best scorers. Still only four seasons into his career, this is likely going to change in short order.

Last season saw Booker average 26.6 points on 47% shooting. That mark from the field is especially amazing given that 33% of his shots were taken from beyond the three-point line. Just imagine how much he’ll excel once Deandre Ayton grows into a larger role in the desert. Booker is going to be a consensus All-Star for the remainder of his career.

More than anything, we’d like to see Tatum take on a larger role. That has not been the case with the Boston Celtics over the past two seasons. Instead, it’s been all about Kyrie Irving. But make no mistake about it, Tatum has everything you want in a true No. 1 scorer.

Still only 21 years old, the Duke product has averaged 17.4 points on 46% shooting throughout the first two years of his career. If he were to move on from the Celtics to a team that would feature him more, there’s little doubt that the wing could average north of 25 points on a consistent basis. That’s how high we are on Tatum.

Talking Hall of Fame after one season? That’s about as absurd as it gets. But in this case, it’s more than justified. Doncic is coming off what might be the best rookie season for an NBA player since LeBron James all the way back in 2003.

Already a EuroLeague MVP as a teenager, Doncic awed onlookers as a rookie. Here’s a dude that averaged 21.2 points, 7.8 rebounds and 6.0 assists en route to being named to the NBA All-Rookie Team. He also put up 27 double-doubles in just 72 games.

A second-round pick back in 2014, Jokic initially seemed to be another overseas project in an era that has seen a ton of them. Almost immediately, he proved doubters wrong. The Serbian averaged double figures as a rookie back in 2015-16 and has seen his game take off every season since.

Jokic averaged 20.1 points, 10.8 rebounds and a resounding 7.3 assists during his Age-23 season. His overall game is next-level stuff around the Association and has brought the league into a new era. Denver’s offense ran through Jokic last season. He’s a center. That’s rare. And it has Jokic continuing on the path to Springfield.

Young’s rookie season was defined by two parts. Considered the best pure shooter to enter the NBA since Stephen Curry, he struggled to the tune of just 15.3 points on 37% shooting over the first 26 games of the season.

It’s what Young did after that stretch which leads us to believe he’s in for a dominating run. The All-Rookie performer averaged 21.0 points and 8.5 assists on 37% shooting from distance over the final 53 games of the season. His trajectory will only point upward from here on.

Statistically speaking, Towns has been among the most impressive bigs throughout the first four seasons of his career in NBA history. Still only 23 years old, he’s averaging 22.3 points and 11.9 rebounds during that span.

At issue here is Towns’ struggles on defense and his team’s lack of overall success. Short of those two things changing, he’s going to continue flying under the radar. Even then, he’s an impressive young kid that is nowhere near hitting his prime. That makes KAT a potential future Hall of Famer.

Playing for a team that has not earned a playoff spot since 2005-06 has allowed Fox to fly under the radar. Though, the 2018-19 season saw the Kings perform extremely well (39 wins) with this former No. 5 overall pick leading the charge.

In his Age-21 season, Fox averaged 17.3 points and 7.3 assists while shooting at a robust 47% from the field. With the likes of Buddy Hield and Marvin Bagley to plank him moving forward, Fox’ status as one of the game’s best young point guards will come to fruition here soon.

It’s all about Simmons putting in the work to create a perimeter game moving forward. If the former No. 1 overall pick is actually able to do that, he’ll become one of the biggest mismatches in modern NBA history.

The issue here has been shooting. Outside of that, Simmons’ first two years have been absolutely dazzling. He averaged 16.9 points, 8.8 rebounds, 7.7 assists and 1.4 steals while shooting 56% from the field as a sophomore. Those are some otherworldly numbers.