10 women in sports who would be great executives 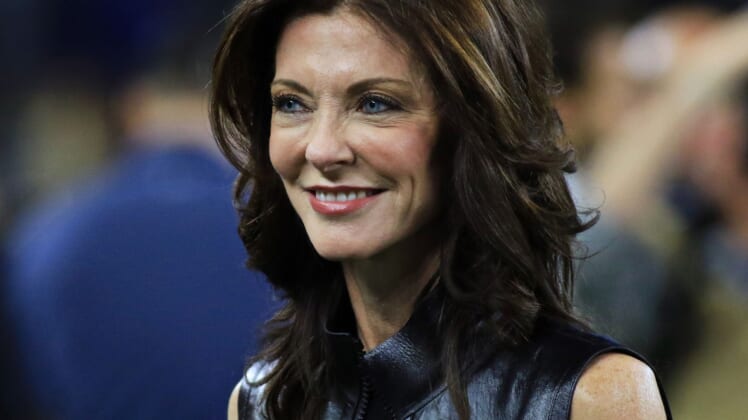 Inclusion has been the name of the game for professional sports leagues in North America over the past several years. No longer are these leagues defined by the good old boy network.

It’s in this that we previously looked at 10 powerful women who would make good sports owners. The next installment in this series checks in on 10 women in the sports world who would be great executives.

From former Raiders CEO Amy Trask taking over for Roger Goodell as the NFL’s commissioner to two highly respected baseball figures, here’s a look at 10 women we’d love to see get a chance in executive roles.

Valavanis is currently the CEO and general manager of the defending WNBA champion Seattle Storm. She’s held that position since 2014 and is also associated with Force 10 Sports Management, LLC; “A sports management firm that creates world-class sport and entertainment events in Seattle,” per the WNBA. Needless to say, her success in these roles would make the highly respected Valavanis a serious NBA general manager candidate if she decides to show interest.

What can we say about this trendsetter that has not been said? Mrs. Trask was the first CEO in the NFL with the Oakland Raiders from 1997-2013. Prior to that, Trask interned in the Raiders’ legal department. She’s since been seen on CBS Sports as an analyst and helped start up basketball’s Big3 with Ice Cube. The respect and admiration Trask demands would make her a very popular choice to eventually replace Roger Goodell when his term ends after the 2024 season. It’s also this type of inclusion that the NFL could use moving forward.

The daughter of owner Jerry Jones, Anderson is among the most important figures in the Cowboys’ front office. She’s currently the Executive Vice President and Chief Brand Officer in Dallas and was just recently pegged the first chairman of the Salvation Army’s national advisory board. At 53 years old, the Stanford graduate could soon replace her father running the Cowboys’ organization. She might be a more popular option than brother, Stephen Jones, who is currently Dallas’ CEO and director of player personnel.

Hedgpeth was just recently promoted to Chief Operating Officer of the WNBA after serving in that role on an interim basis since October of 2018. She reports directly to WNBA President Mark Tatum and previously served as the Vice President, Team Marketing and Business Operations (TMBO) for the NBA. Commissioner Adam Silver is still early in his term. He’s also led the Association into a more progressive and inclusive environment than previous commissioner David Stern. Even then, his time will at some point come to an end. What better option to move the NBA further a long than Mrs. Hedgpeth?

MLB has not been as welcoming of a league as the NBA and NFL for women. It’s the sad reality of the situation. The good old boys network and the like. However, Ng has received multiple interviews for general manager jobs and could soon be the first woman to hold that role in baseball. She’s currently the Senior Vice President of Baseball Operations for Major League Baseball after serving as the Dodgers assistant general manager from 2001-11. Prior to that, she served in the same role with the New York Yankees. The credentials are obviously here for Ng to finally become a general manager.

Back in 2015, the New York Jets promoted Mrs. Davidson to director of football administration. This made her one of the highest-ranking women in an NFL front office. She’s responsible for managing the team’s salary cap and player budget. Given that the league exists with a hard cap, this is no small role. Having earned her juris doctorate from Cornell in 2005 and acting as a member of the New York State Bar, Davidson’s credentials speak for themselves. It will be interesting to see if she’s considered a viable general manager option moving forward.

The former United States Secretary of State under then President George W. Bush, Rice’s accomplishments are by now well known. Considered a brilliant mind, Rice obtained her master’s degree in political science from Notre Dame back in 1975 and started working in the State Department under former President Jimmy Carter a couple years later. As it relates to the sports world, Rice served on the College Football Playoff Selection Committee from 2013 to 2016. She’s been bandied about as a potential replacement for Goodell over the past several years.

Unlike her counterpart in the NFLPA, DeMaurice Smith, Roberts has acted as a strong union head for the NBPA. She was just re-elected executive director of the basketball union back in July of 2018 and continues to work well with current NBA Commissioner Adam Silver. While a role in the NBA’s league office could be in the cards, we would not be surprised if the Cal-Berkeley grad decides to join an NBA front office. Mrs. Robert has both the experience and admiration of NBA players to make that jump.

It might not be with her current Oakland Athletics organization, but Alvarez should soon draw some interest as a general manager. She’s currently Oakland’s scouting coordinator under front office head Billy Beane and has done a tremendous job helping build up what had been one of the weakest farm systems in baseball. She holds true to the analytical philosophy that Beane started during the whole Moneyball days. If the history of those working under him finding promotions elsewhere stands true, Mrs. Alvarez should soon find herself in position to land a general manager job herself.

Talk about someone who has risen up the ranks in a big way. Blackburn is currently the executive vice president of the Cincinnati Bengals. She had previously worked for a Cincinnati law firm before joining the Bengals in 1991. Blackburn is considered an expert in the salary cap, having led that department in Cincinnati for years now. In fact, Blackburn became the first woman to be a chief contract negotiator in NFL history. Surely, she will be of interest for many teams attempting to revamp their front office structures.