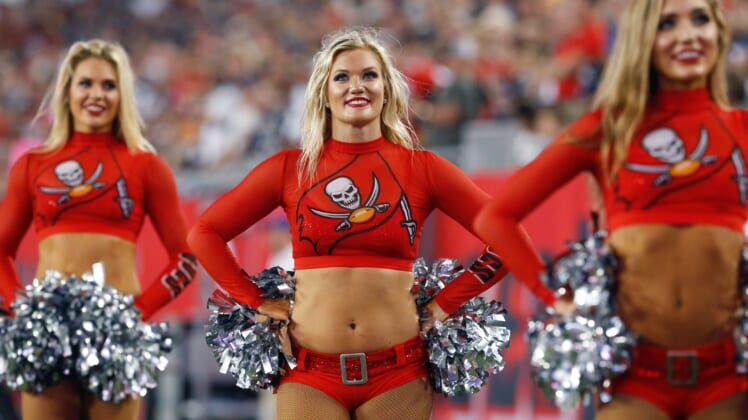 There’s always a couple teams in free agency that tend to overspend for the most mediocre of talent. In the past, the Washington Redskins have been that team around the NFL.

Now that the league’s salary cap has once against increased, there’s other teams out there set to bungle free agency this march. Meanwhile, one team in Ohio never seems to spend money. That could lead to continued struggles.

Here, we check in on 10 teams set to bungle NFL free agency in March.

General manager Jason Licht has a lot of work to do this offseason to save his job. He’s struggled big time in both the draft and free agency since taking over that role back in 2014. It obviously revolves around the struggles of Jameis Winston. But all the blame can’t be placed in the former No. 1 pick.

At issue here is a less-than-stellar cap situation. Tampa Bay currently finds itself just $1.72 million under the cap. It is said to be interested in hanging on to defensive tackle Gerald McCoy at his $13 million cap hit for next season. We expect Tampa Bay to add enough cash under the cap to make a couple moves. But we’re not sold on said moves panning out. It’s that simple.

Even with almost $61 million to spend in free agency this spring, we’re not high on Oakland making a huge impact. The organization is not an ideal landing spot for top-end free agents. Meanwhile, Mike Mayock takes over as the team’s “general manager” despite not having any front office experience. It’s a recipe for further disaster for this long-fledgling franchise.

It is rather stunning that general manager Mike Maccagnan kept his job after failing to provide recently-fired head coach Todd Bowles with a decent roster. Remember, both were extended by the Jets last offseason. With only Maccagnan remaining, the onus is certainly going to be on him to hit a home run in free agency. That’s magnified by the fact that New York has almost $98 million to spend under the cap.

We’re not too confident here. The Jets’ biggest free-agent splash last offseason was to sign cornerback Trumaine Johnson to a five-year, $72.5 million contract. Pro Football Focus did grade him out as the 22nd-best corner in the NFL last season. But some within the organization already view the signing as a bust. At the very least, it was a massive overpay. The hope in Jersey is that Maccagnan doesn’t fall into the same trap with a ton of money to spend again this March.

David Gettleman. What can we saY about the second-year Giants general manager that hasn’t already been said? He’s decided to move on from three-time Pro Bowl safety Landon Collins — keeping Eli Manning at a ridiculous cap cost for his production in the process. Meanwhile, the team is willing to hold on to the likes of Janoris Jenkins and Alec Ogletree at a combined $26.5 million cap hit. Oh, let’s not even mention the fact that 2018 prized free-agent signing, offensive tackle Nate Solder, proved to be a major bust.

Now, with just $22.8 million to spend under the cap, these Giants are not in the best position to be big-time players in free agency. Given Gettleman’s track record both in Jersey and Carolina, maybe that’s not a bad thing. What could make this worst is the potential trade of star receiver Odell Beckham Jr. Whew.

The time is now to stop making excuses for the combination of general manager John Lynch and head coach Kyle Shanahan. Now in their third offseason together, this duo must ace free agency in a big way. Given that the only real successful signings over their first two years together were fullback Kyle Juszczyk, kicker Robbie Gould and cornerback Richard Sherman, that’s magnified even further.

We might be bullish on the 49ers making some major splashes. Shanahan himself has indicated as much. Even then, this front office has not given us many reasons to believe that will happen. If we’re proved right, a once-expedited rebuild will continue to go slower than expected.

Has the Bengals’ front office given us any reason in the past to believe it will even be big-time players in free agency? Among the cheapest teams in professional sports, it seems that Cincinnati is more than willing to end every free agency with a huge cap holdover for the following March. With $50.52 million to spend under the cap, that must change right now.

Cincinnati has a first-year head coach in Zac Taylor more than willing to take over a long-term rebuild. The in-house talent isn’t there. To even be somewhat competitive next season, the Bengals must go away from their longstanding MO of being quiet in free agency. We’re just not too confident that it will actually happen.

As with other general managers on this list, Steve Keim has struggled greatly in the desert. Sure his draft classes have left a lot to be desired, but recent free-agent signings are just as worrisome. The one-year, $20 million contract he signed quarterback Sam Bradford to last offseason is the latest example of this. Bradford started all of three games before being jettisoned from Arizona. Other examples of free-agent busts include guards Mike Iupati and Justin Push as well as tight end Jermaine Gresham in recent years.

Arizona is slated to have under $40 million to spend in free agency. That’s minus what the No. 1 overall pick will count against the cap. Not necessarily an attractive free-agent destination, Keim will likely have to overpay for relevant talent. That’s never a sign of having a successful free-agent period.

John Elway’s track record is what we’d call overrated in Denver. Trading off Case Keenum’s contract doesn’t change that. Finding a band-aid in Joe Flacco under center doesn’t change that. And even more so than the quarterback position, it’s now time for Elway to prove that he can ace free agency in order to bring relevance back to Mile High.

It didn’t start out in the best of manners. In addition to keeping Flacco’s $18.5 million cap hit unchanged, Elway decided to hang on to veteran receiver Emmanuel Sanders at a cost of $12.94 million for the 2019 campaign. Now just $36.63 million under the cap, Denver has to get creative. That has not necessarily been the MO of the Broncos under Elway. Don’t expect this to change in free agency.

Fans in the nation’s capital gave a collective “welp” when reports broke earlier in March that the Redskins had traded for Case Keenum. By definition, it’s quarterback purgatory in D.C. Keenum will compete with Colt McCoy for the team’s starting job with Alex Smith sidelined for the 2019 campaign. That quarterback competition certainly isn’t going to draw the best of the best when it comes to skill-position talent.

All the while, Washington now finds itself less than $10 million under the cap after taking on part of Keenum’s contract. Do we really expect the league’s most overrated executive in Bruce Allen to turn things around here? That’s as believable as President Trump and Colin Kaepernick going whale watching together.

Five words. Fix the pass protection issues. This is what franchise quarterback Cam Newton has to be thinking after dealing with injuries late last season. Matt Kalil at left tackle was never the answer. And now that Daryl Williams might be leaving in free agency, maybe Marty Hurney might do something to address this years-long issue. Then again, it’s the Panthers. They seemingly think that Newton is literally Superman back there.

Currently just $15.2 million under the cap, there’s not a lot Carolina can do to address other areas in free agency. It simply needs to cut fat off its roster and focus on the offensive line. If the team’s history is any indication, it’s delusional to believe this will actually happen. Onward, Cam!