With only two weeks remaining in the NFL regular season, the playoff picture has started to clear up a bit. A whole host of AFC teams nearly fell out of contention after losing on Sunday, including the Cleveland Browns, Miami Dolphins and Houston Texans. Meanwhile, the Denver Broncos, Indianapolis Colts and New England Patriots all clinched their divisions.

Out in the NFC, the San Francisco 49ers were eliminated from playoff contention after losing to a red-hot Seattle Seahawks team on the road. A Seahawks team that finds itself in position to nab the top overall seed in the conference. A bit further east, Tony Romo and the Cowboys went into Philadelphia and grabbed sole possession of first place against a suddenly struggling Eagles team.

As we have done each week this season, here is a look at 10 takeaways from Sunday’s Week 15 NFL action.

New England, Indianapolis and Denver all clinched their respective divisions on Sunday. That means half of the AFC Playoff field is already decided. In addition to this, Pittsburgh and Baltimore put pressure on a Bengals team that absolutely dominated Cleveland 30-0 to pretty much knock the Browns out of playoff contention.

The wild card race is what’s going to be interesting moving forward. San Diego couldn’t take that monkey off its back against Denver, therefore it’s in a three-way tie for the seventh spot in the AFC, behind the nine-win Steelers and Ravens.

Houston, Miami and the aforementioned Browns all dropped two games behind Baltimore and Pittsburgh for the wild card spot. Meanwhile, all three now stand one game behind the three teams that are 8-6 heading into Week 16.

It may sound confusing, but the AFC Playoff picture has definitely cleared up. Three teams are guaranteed a spot, while another six teams are vying for the final three spots. It should make the final two weeks of the regular season pretty interesting.

Courtesy of Seahawks.com: Colin Kaepernick and the 49ers now have an uncertain future ahead of themselves.

By virtue of its loss to the Seattle Seahawks and the Detroit Lions victory over Minnesota, San Francisco is eliminated from postseason contention with two weeks remaining in the regular season. And while head coach Jim Harbaugh indicated he will sit down with the brass in Santa Clara after the season, common logic suggests he will not return to the 49ers for the final year of his contract.

The issue now becomes whether San Francisco is going to trade Harbaugh and who the brass may replace him with. The options are vast here. San Francisco could go back to its history and bring in former offensive assistant Jon Gruden. It could also promote one of a couple options from the defensive coaching staff. Coordinator Vic Fangio has been mentioned as a potential replacement, but I wouldn’t eliminate defensive line coach Jim Tomsula, who did coach one game for the team back in 2010 after Mike Singletary was fired.

As the 49ers disappointing season wraps up, there are going to be a lot of decisions that will have to be made in the next couple months. And more so than the coaching position, there are some huge player personnel decisions to be made. Will the team start to weed out veterans such as Frank Gore and Patrick Willis in lieu of younger, cheaper options? Will the new head coach be sold on Colin Kaepernick? And what about San Francisco’s own free agents, including Mike Iupati and Michael Crabtree?

The 49ers are surely a team in transition after what has been a disappointing season. But the talent is most definitely here for the team to get back into the playoffs in 2015 and beyond. It’s now all about those aforementioned decisions.

3. Green Bay Packers are not Invincible

We aren’t too sure that the Buffalo Bills exposed Green Bay on Sunday, but they surely did something right. Top MVP candidate Aaron Rodgers completed just 17-of-42 passes for less than 200 yards with zero scores and one interception. It was his first full game without a touchdown since Week 13 of the 2012 season. It obviously didn’t help that a usually sure-handed Packers receiver group dropped a whopping seven passes.

For the Bills, this win helped keep them in the AFC Playoff race. They are now one game behind Baltimore and Pittsburgh in the wild card race and tied with two other teams at 8-6.

As big of a win that this might have been for Buffalo, it’s an even larger loss for the Packers. They are now technically behind Detroit in the NFC North by virtue of a head-to-head loss to the Lions. This puts the Packers in the sixth seed heading into Week 16. And while the playoffs are almost a lock here, Green Bay really wants to get home-field and a first-round bye. This loss could have huge ramifications when it comes to that.

Courtesy of Bengals.com: Manziel wasn’t quite ready for what the Bengals had in store for him.

This isn’t what Cleveland had in mind when it benched Brian Hoyer in favor of the rookie first-round pick from Texas A&M. Manziel completed 10-of-18 passes for just 80 yards with zero scores and two unacceptable interceptions. Utilizing a spy throughout the game, Cincinnati also held Johnny Football to 13 yards on five attempts. The complete domination by Cincinnati’s defense can be summed up by the fact that Cleveland put up a total of 54 net passing yards.

Now following this loss, Cleveland finds itself nearly completely out of the playoff race. It is two games out of the final two playoff spots and loses the tiebreakers against every single seven-win team. While we can’t place all the blame on Manziel, it sure looked like he wasn’t ready to start a NFL game. With two games remaining in the season, it will be important to see how the rookie responds, especially considering he will be handed the keys to the offense with Hoyer likely moving on in free agency. 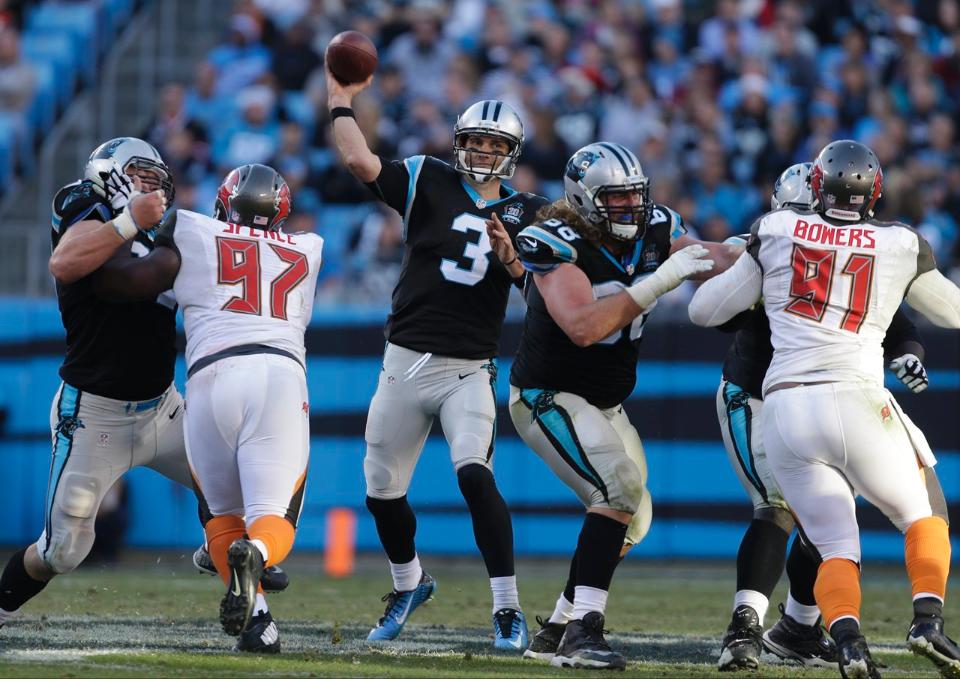 Courtesy of Panthers.com: Filling in for an injured Cam Newton, backup Derek Anderson got the job done in Carolina.

For now. Depending on the outcome of the Saints-Bears game on Monday night, Carolina could very well be in first place in the NFC South with a 5-8-1 record heading into Week 16. Replacing an injured Cam Newton, who broke two bones in his back in a car accident last week, Derek Anderson played great all-around football. He completed 25-of-40 passes for over 273 yards with a touchdown. And most importantly, he didn’t turn the ball over in a 19-17 win over Tampa Bay.

If New Orleans does lose to Chicago, the Panthers will control their own destiny in the weakest division in football. If not, they will need some help. The better news here is that Carolina is hopeful Newton will suit up next week against Johnny Manziel and the Browns.

6. Battle for First-Round Bye in AFC Playoffs will be Fun

New England controls its own destiny in the AFC. If they beat the Jets and Bills in the final two games, Tom Brady and Co. will have home-field advantage throughout the playoffs. The larger question surrounding the AFC Playoffs is who will earn the coveted second spot and a first-round bye. Denver currently holds that spot at 11-3, one game ahead of Indianapolis and a 1.5 games ahead of Cincinnati. Denver also holds the tiebreaker over both teams.

With that said, the Broncos have a big game remaining at Cincinnati before closing the season out at home against the Raiders. If the Bengals are able to win out, it would mean that Oakland has to go into Denver and win. While that’s an unlikely scenario, we all know the Raiders have been in full-scale spoiler mode for the majority of the second half of the season.

Opening up a 21-0 first-half lead, the Cowboys withstood an Eagles rally that saw the home team score 24 consecutive points to pull off an impressive 38-27 victory and gain sole possession of first place in the NFC East. The Cowboys really did look like the “Triplets” of old in this one, showing Philadelphia that their offense was going to be a load to stop throughout the night.

Now 10-4 on the season, Dallas isn’t completely out of the woods. It still loses the tiebreaker to Philadelphia based on a worst divisional record, and would be on the outside looking in as it relates to a three-way tie for the wild card. Dallas does, however, hold the head-to-head tiebreaker against Seattle. So while this team did make a major statement by winning its seventh consecutive road game on the season, it sorely needs to polish off Indianapolis next week at home to almost guarantee itself a playoff spot.

8. Arizona and Seattle Next Week for the NFC West

This likely won’t end well for the Cardinals. They might have clinched a playoff spot by virtue of the Cowboys win over Philadelphia, but the idea of going up against Seattle with Ryan Lindley under center cannot be too sexy. Short of pulling off the upset, Arizona will back its way into the playoffs as either a No. 5 or No. 6 seed. It will do so with Lindley likely having to play a road game in the wild card round.

For the Seahawks, they have to be considered the top contender to get back to the Super Bowl in the NFC. Winners of four consecutive, Pete Carroll’s squad controls its own destiny in the NFC West. If they win out, the Seahawks will win their second consecutive division title.

9. Pittsburgh Steelers and Baltimore Ravens Continue to Put Pressure on the Cincinnati Bengals 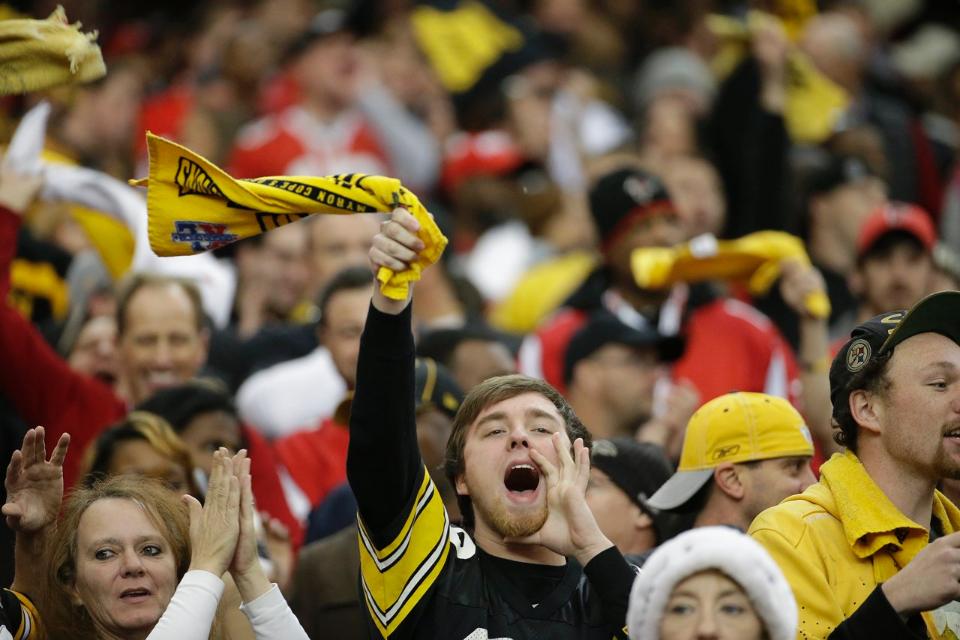 Cincinnati now possesses just a half game lead over Baltimore and Pittsburgh in the AFC North. It also has to host Denver next week before closing the regular season in Pittsburgh against the Steelers. This means that Ben Roethlisberger and Co. control their own destiny in the playoff race.

As it relates to the Ravens, they will need both the Steelers and Bengals to lose a game while winning out in order to grab the division title. Baltimore’s final two games are also easier than its AFC North counterparts. John Harbaugh’s squad travels to Houston to take on the Texans next week before hosting Cleveland in Week 17.

10. Philadelphia Could Miss Out on the Playoffs

If the playoffs were to start today, the Eagles would be on the outside looking in. Following a horrendous home loss to the Dallas Cowboys, Chip Kelly’s squad has now dropped two consecutive games by a combined 21 points. And while Philadelphia has a rather easy remaining schedule, the Redskins and Giants on the road, it will need some help in order to make it to the playoffs.

Dallas needs to drop one of its remaining two games in order for Philadelphia to win the division. Philadelphia is also one game behind both Green Bay and Seattle for a wild card spot and loses the head-to-head tiebreaker against both teams. There is a scenario at play here that could see Philadelphia miss the playoffs with an 11-5 record.