Contending teams looked to draw a line in the sand between themselves and pretenders during Week 13 of the NFL season. For some, that line grew rather large. But for others, it’s about as thin as one grain of sand.

The Cleveland Browns looked to continue what has been a surprising season, but fell short against a Buffalo Bills squad that suddenly has playoff aspirations after two consecutive wins. The New England Patriots failed in their attempt to prove to the NFL world that they were indeed the class of the league against Aaron Rodgers and the Packers.

Meanwhile, the Arizona Cardinals fell flat against another first-place team in the Atlanta Falcons at the Georgia Dome. This performance left open the real possibility that Pete Carroll and the Seattle Seahawks could grab the division title when all is said and done.

And on Sunday night, the Denver Broncos went into Arrowhead and defeated a suddenly struggling Kansas City Chiefs squad to make a strong statement to the rest of the AFC that they weren’t going to go down quietly.

As we have done each week this season, it’s time to give you 10 takeaways from Sunday’s Week 13 NFL action.

We brought this topic up a few weeks back, but it might start to take on a form of its own following yet another ridiculous performance from Watt against the Tennessee Titans on Sunday. Statistically, Watt was all over the place. He recorded three tackles, two sacks, six quarterback hits, one forced fumble and a fumble recovery.

However, it was Watt’s ability to change the entire dynamic of the game that stands out. With Tennessee nearing midfield in the fourth quarter of a three-score game, Watt forced a Jake Locker fumble before recovering it and setting the Texans up inside Tennessee’s 25. A few plays later, the defensive end caught his third touchdown of the season to give Houston a 31-point lead. These two plays magnify Watt’s importance to a team that remains in the AFC Playoff race entering Week 14.

2. Johnny Manziel’s Time May be Coming Sooner Rather Than Later 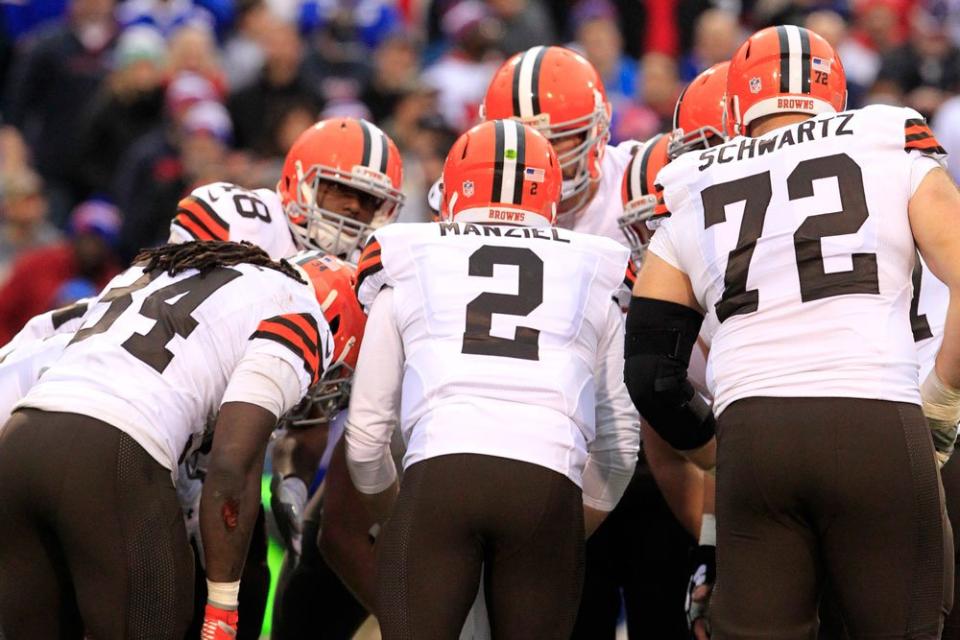 Courtesy of ClevelandBrowns.com: Manziel may in fact be the starter in Cleveland from here on out.

Following yet another horrendous performance from Brian Hoyer, Browns head coach Mike Pettine finally decided enough was enough and put Johnny Manziel in a game for his first extended action of the season. While Cleveland was down three scores and the game was out of hand, Manziel came in and played pretty well. He completed 5-of-8 passes for 63 yards without an interception. The rookie also added a 10-yard touchdown run for the Browns only six pointer of the afternoon.

Now at 7-5 on the season and in must-win mode for the remainder of the year, will the Browns turn to Manziel as the starter? For his part, Pettine sounded like it was headed in that direction (via NFL.com).

It’s not like we’re just going to go back to Brian,” Pettine said. “This has been a cumulative thing where discussions about a change at quarterback have been more and more lively. We’ll evaluate both quarterbacks and have a decision soon.

And why not? Hoyer has thrown a total of one touchdown compared to six interceptions over the past four games. It simply not fair to the rest of the team to continue throwing him out there to crap away the Browns chances at earning that rare playoff spot. If Manziel gives Cleveland the best chance to win, he should be starting. It’s that simple.

3. The Arizona Cardinals are in Trouble in the NFC West

Now just one game ahead of the Seattle Seahawks in the NFC West, Arizona finds itself in a troublesome position. It still has a game remaining against those Seahawks as well as outings against both the Kansas City Chiefs and San Francisco 49ers remaining on the schedule.

Following the team’s 29-18 loss to the Atlanta Falcons, the larger worry has to be injuries. Larry Fitzgerald missed his second consecutive game with a MCL sprain. Safety Tyrann Mathieu exited with a broken thumb, while Andre Ellington left the field limping with a hip pointer. Neither Mathieu or Ellington returned to action. Couple these injuries with the loss of Carson Palmer for the season, and there has to be some major concerns in Arizona right now. As depleted as this team might be, that top seed and first-round bye in the playoffs may just be a pipe dream at this point. More than that, Arizona needs to hold off a suddenly surging Seahawks squad for the division title.

4. The AFC Playoff Picture is Perplexing 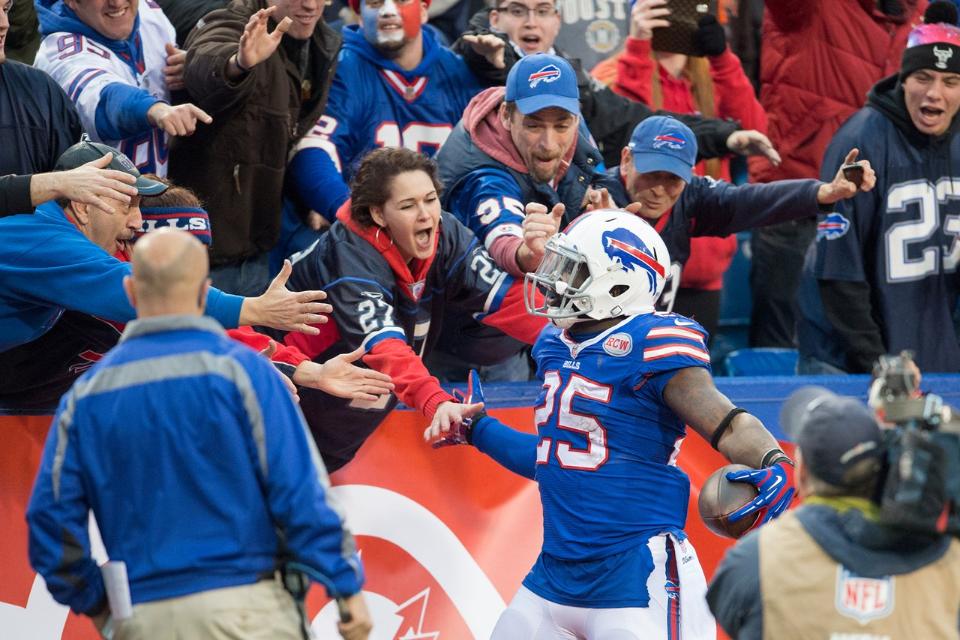 Courtesy of BuffaloBills.com: By virtue of their win on Sunday, the Bills are still within reach in the AFC.

Following their loss to the Denver Broncos on Sunday night, the Kansas City Chiefs hold a precarious lead for the final wild card spot in the AFC. At 7-5, they join four other teams with the very same record. Also in the mix for one of the last two spots in the conference are the Miami Dolphins (6-5) and Houston Texans (6-6).

It’s so perplexing at this point that there really is no reason to get into all the tiebreakers here. All we know right now is that San Diego (8-4) and Kansas City (7-5) would own the two wild card spots.

At the top of the conference, the New England Patriots’ loss means that Denver is tied for the No. 1 seed. With that said, New England still holds the head-to-head tiebreaker between the two teams.

In terms of the AFC North, the Cincinnati Bengals have separated themselves from the pack. They were the only team in that division to win on Sunday and now hold a two game lead in the loss column over the other three teams battling for a playoff spot in the division.

5. Is Tom Coughlin Fired Yet?

By virtue of their loss to the Jacksonville Jaguars on Sunday, the New York Giants boast just three wins heading into December. That’s the worst record for a Tom Coughlin-led team at this point in the season since he was coaching the expansion Jaguars back in 1995. Talk about coming full circle. At some point soon, the Giants may decide that enough is enough and send Coughlin packing. Could this happen prior to the end of the regular season? That’s the larger question at hand. After all, there is very little chance that he will return to the team in 2015.

6. The Oakland Raiders are Historically Bad

Oakland may have picked up that elusive victory last week against Kansas City, but this is a really bad football team. Following their 52-0 loss to the St. Louis Rams, the Raiders are now 1-11 on the season without any real hope of winning another football game.

It got so bad on Sunday that the Rams pretty much shut their offense down with the team up 38-0 at halftime. That didn’t stop the Raiders from allowing St. Louis’ defense to score in the second half. Heck, the bloopers were real Sunday afternoon at the Edward Jones Dome. From T.J. Carrie running into his own teammate on a punt return to Matt Schaub (yes, that one) throwing a pick-six after Derek Carr was pulled, it went from bad to humiliating in a hurry. And in reality, any thought of Tony Sparano keeping this job long term was thrown out the window. So much is wrong in Oakland that it really is difficult to pinpoint where the team needs to start in the offseason. 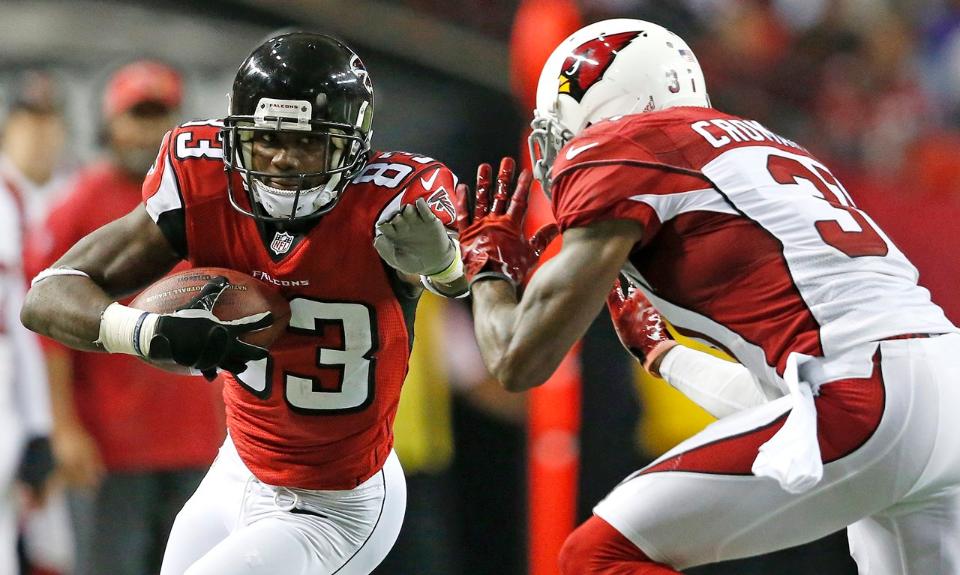 Courtesy of AtlantaFalcons.com: By virtue of their win against the Cardinals, the Falcons remain in first in the NFC South.

Imagine that. Both the Saints and Falcons were winners on Sunday for the first time on the same day since Week 3. That’s how bad the NFC South has been this season. After losing three consecutive home games, New Orleans went into Pittsburgh and beat a Steelers team that had a whole heck of a lot to play for in front of its home crowd. Drew Brees threw five touchdowns and Mark Ingram added 122 rushing yards in the 35-32 victory.

Meanwhile, Atlanta handled business against a first-place Arizona Cardinals team by the score of 29-18. It was the Falcons third win in four games and allowed them to remain ahead of New Orleans in the division based on a head-to-head tiebreaker. The most impressive aspect of this performance was Julio Jones going up against Patrick Peterson and coming down with 10 receptions for 189 yards and a score.

With both Atlanta and New Orleans now 5-7 on the season, it sure does look like the NFC South will come down to their Week 16 matchup in Louisiana. The only question that remains here is whether one of these teams will head into the playoffs with a .500 record. That still seems unlikely at this point.

8. The Carolina Panthers are a Bad Football Team

Following their humiliating 31-13 loss to the Minnesota Vikings on Sunday, Carolina now sits at 3-8-1 on the season and hasn’t won a game since a Week 5 victory over the Chicago Bears. Cam Newton was under pressure once again, this time going down a total of four times. And while he did tally nearly 250 total yards of offense, it’s readily apparent that the Panthers simply haven’t given him enough help to succeed. For a team that boasted a 12-4 record last season, this has to be one of the biggest disappointments in franchise history. Now moving forward to the final quarter of the season, the Panthers need something positive to happen heading into what promises to be an interesting offseason in Carolina.

9. Green Bay Makes Statement to the Rest of the NFL

Aaron Rodgers was back at it again, this time against the New England Patriots on Sunday. Riding a hot first half that saw him tally nearly 300 passing yards, Rodgers put up yet another dazzling performance in a matchup between two of the best teams in the NFL. Overall, he put up 368 passing yards with two touchdowns and zero interceptions. This brings Rodgers’ season total to 32 touchdowns and three interceptions. Can you say MVP?

More importantly for the Packers, they made a statement on the biggest stage that the league has had to offer this season. Going up against a Patriots squad that had won seven consecutive, the Packers controlled the game throughout. And now at 9-3 on the season, Green Bay has its vision set on the No. 1 seed and home-field advantage in the playoffs. Unfortunately for the rest of the NFC, Rodgers has now tallied 31 touchdowns compared to zero interceptions in his last 12 regular season starts at Lambeau.

10. Battle for the AFC West Summed up by Sunday Night Football Action

It’s pretty much over. You can wrap a neat little bow on it. The Denver Broncos will win their third consecutive AFC West championship following an impressive 29-16 victory over the Kansas City Chiefs at Arrowhead on Sunday night. Denver now boasts a two-game lead over Kansas City and remains one game ahead of San Diego (with all the tiebreakers) heading into Week 14.

What was so amazing about this performance was that Denver’s rushing attack put up 214 yards compared to 179 passing yards from Peyton Manning. If the Broncos can get this type of balance on offense moving forward, they are going to be incredibly difficult to beat.