In attempting to avoid the overreactions that become paramount following the first Sunday of the NFL regular season, we tend to brush off early-season performances as unimportant in the grand scheme of things.

Unfortunately, that’s a bit too simple minded. In a 16-game schedule, one game means a whole heck of a lot. That’s magnified even further by the fact that teams are looking to get off to good starts out of the gate.

In what will be a weekly column here at Sportsnaut, we take a gander at 10 things that can be taken away from Sunday’s NFL action. You will see a lackluster St. Louis Rams team put on notice. But you will also be privy to some rather awesome complements for some teams around the league, such as the Atlanta Falcons surprising Week 1 win against the New Orleans Saints.

1. The Dallas Cowboys are not fixed 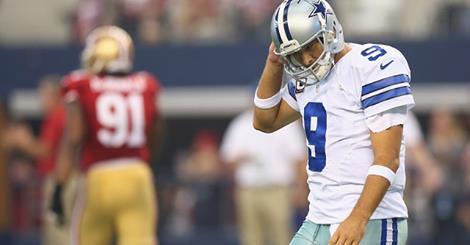 Romo’s Week 1 struggles are a bad sign for the Cowboys.

Remember the good old days when Dallas and the San Francisco 49ers played competitive football games against one another? That seems like so long ago. Tony Romo completely crapped all over himself in the first half, throwing three interceptions and setting the 49ers up with a short field multiple times. Before we knew it, this game was in garbage time early in the third quarter.

The final score of 28-17 was not indicative of just how bad Dallas looked in front of its “home crowd” in the season opener. And a lot of that blame goes to Romo, who threw three really bad interceptions. Having trouble seeing the field, Romo simply threw up desperation heave after desperation heave in the embarrassing defeat. Considering that he’s one of the most important players to his team in the NFL, this is not a good sign. If Romo has a down season, the Cowboys will be looking up from the cellar in the NFC East.

2. The Atlanta Falcons are back 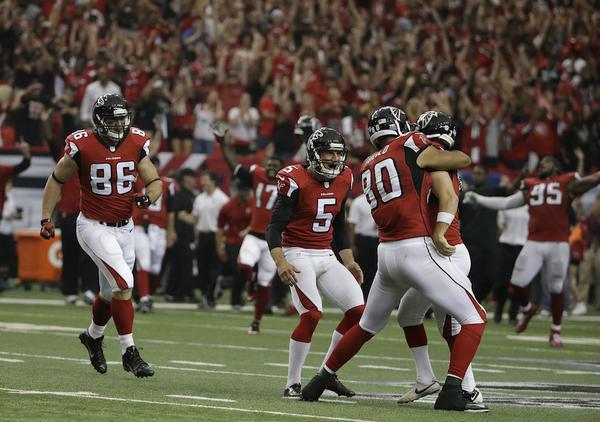 Huge win for the Falcons on Sunday.

This was an absolutely huge win for a Falcons team that is coming off an injury-plagued 2013 campaign that saw them win a total of four games. Taking on the New Orleans Saints, who many have pegged as an under-the-radar conference champion contender, Mike Smith’s squad pulled off the impressive 34-31 victory.

Matt Ryan had a career day, completing 31-of-41 passes for 448 yards and three scores in the game. Julio Jones, who was hobbled throughout the 2013 season, recorded seven receptions for 116 yards against what was supposed to be a vastly improved Saints defense.

More important, Ryan was sacked just one time in the game as rookie left tackle Jake Matthews held his own against the Saints pass-rush heavy 3-4 scheme. In this, he was able to pick apart a vastly overrated secondary. Considering how the Tampa Bay Buccaneers looked against a Cam Newton-less Carolina Panthers squad and the fact that Carolina has holes of its own, the door is open for Atlanta to shock the world in the NFC South this season.

3. The Kansas City Chiefs are not a playoff team right now 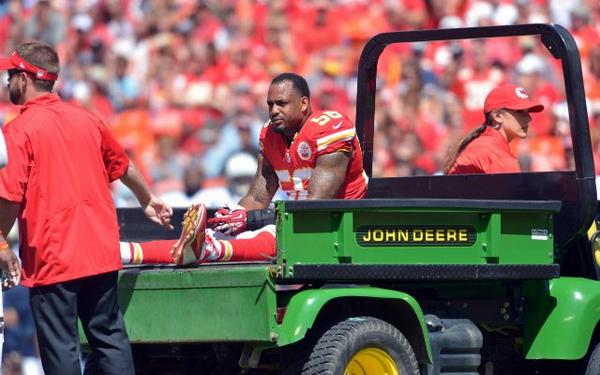 Derrick Johnson’s injury may hurt the Chiefs more than their Week 1 loss.

Ignoring for a second (if that’s even possible) that Derrick Johnson will likely miss the remainder of the season with a torn achilles, the Chiefs simply don’t have the look of a playoff team at this point. Without his favorite target in Dwayne Bowe, newly extended Alex Smith threw three interceptions. Running back Jamaal Charles recorded just 19 yards on seven attempts, as Andy Reid simply forgot he existed throughout the game.

Equally as disturbing, Kansas City’s once vaunted defense yielded over 400 yards to what is a much improved Tennessee Titans offense in the surprising 26-10 loss. For a team that earned a trip to the playoffs last year, the Chiefs simply don’t look like the same team right now. Things can change over the course of a season, but it’s going to be tough for them to overcome major issues on both sides of the ball to compete in a very good AFC West.

4. Overrated teams show what they’re made of 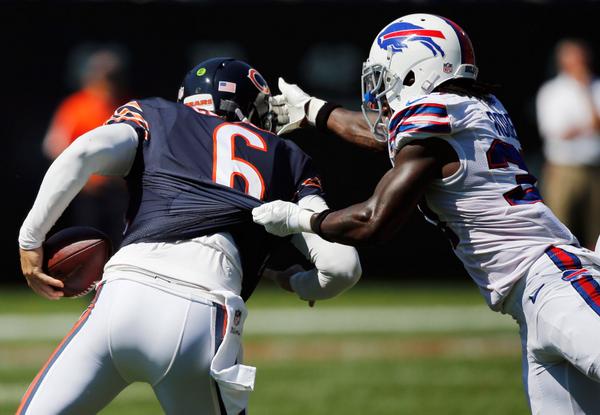 Jay Cutler is not the problem in Chicago.

The New Orleans Saints and Chicago Bears were projected to be top-tier teams in the NFC by a ton of experts out there. Unfortunately, both teams lost against opponents who combined to win 10 games a season ago. For the Saints, it was all about failing to stop Matt Ryan and the Falcons offense.

As it relates to the Bears, they really took one on the chin against a Buffalo Bills team that finished in the cellar of the AFC East last year and had struggled big time during the preseason. Jay Cutler threw two ill-time interceptions as Chicago’s offense turned the ball over a total of three times in the overtime loss. If they can’t take care of business against a weak opponent at home, how are they going to compete against the Green Bay Packers and San Francisco 49ers of the world later this season?

The Saints loss might be a bit more understandable considering they were going up against a division opponent with a lot to prove. But it still hurts in the grand scheme of things. You can’t give up 568 yards in a NFL game and expect to win. Defensive coordinator Rob Ryan definitely has his work cut out for him.

5. Greg Olson leaves a lot to be desired as Raiders’ play caller 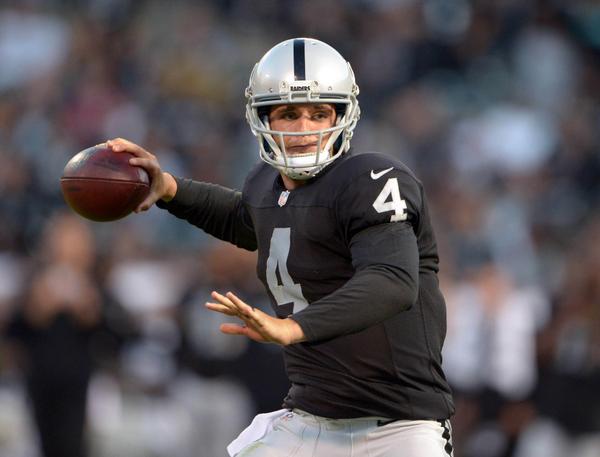 If the Raiders are going to start Carr, they need to let him thrive.

If the Raiders were so intent on playing rookie signal caller Derek Carr, they might want to consider actually allowing him to utilize the entire playbook. From the limited amount of time I spent watching this game, Oakland’s offensive philosophy left a lot to be desired. At one point, Olson’s unit had put up 75 yards on 32 plays.

The conservative play calling is summed up solely by the following stat line. Both Gabe Jackson (guard) and Marcel Reece (Pro Bowl fullback) recorded one catch on the game. Completely ignoring the pass-catching fullback and scheming away from getting the ball to their playmakers in space, the Raiders have only themselves to blame for the 19-14 loss against the New York Jets. If Olson and Co. want Carr to play and progress as a quarterback, they can’t hold him back from a play-calling standpoint. It really is that simple.

6. The Miami Dolphins are set to contend in the AFC East 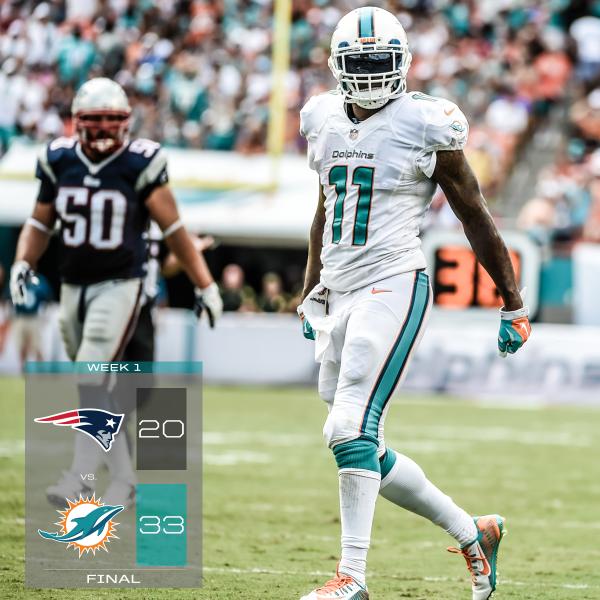 Impressive Week 1 performance from Miami may be theme this season.

Prior to the 2013 season, I made the somewhat unorthodox selection that Miami would win the AFC East. Just a few weeks later, this prediction was about as legit as Wes Welker’s blaming of the NFL for his failed drug gest. Fortunately for Dolphins fans, my Molly popping days are clearly in the past, as it appears they’re one year late in potentially making this prediction come true.

When all was said and done Sunday afternoon, Miami thoroughly defeated its AFC East counterparts in the New England Patriots by the score of 33-20.

In a sign that the Dolphins success won’t be short lived, their running game absolutely dominated what was supposed to be a studly Patriots defensive front. Knowshon Moreno, making his first start with the Dolphins, put up 134 yards on 24 carries. Meanwhile, former featured back Lamar Miller averaged 5.4 yards on his 11 attempts.

Defensively, the Dolphins forced New England into a one-dimensional offensive attack. Tom Brady threw the ball a ridiculous 56 times for just 249 yards. He was sacked four times (twice by Cameron Wake) and hit a total of six times. It was utter domination from the get go for Miami’s defense.

7. Concerns over the San Francisco 49ers were overblown 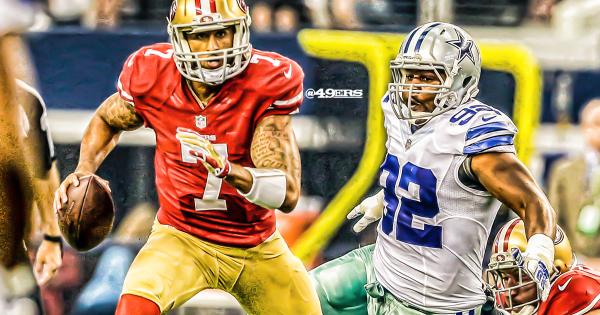 Kaepernick appears ready for a breakout season in 2014.

Not too often do NFL teams put up 21 points before attempting a single run. This is exactly what the 49ers did as they took advantage of mistake after mistake from the Cowboys in a game that was over before halftime.

Despite being outgained 382-319, the 49ers were in domination mode in their season-opening 28-17 victory over Dallas. Forced to play without starting cornerbacks Tramaine Brock and Chris Culliver for the majority of the game, the likes of Perrish Cox and youngster Dontae Johnson performed extremely well in coverage. If it wasn’t for prevent defense in the fourth quarter and a couple atrocious calls by the officials, this game would have been much more lopsided.

Offensively, the 49ers were on their game. Colin Kaepernick completed 16-of-23 passes for 201 yards and two touchdowns. Meanwhile, Frank Gore and Carlos Hyde combined for 116 yards on 23 carries. Changing their scheme a tad under coordinator Greg Roman, the 49ers offense looked much more electric than in the past. That’s going to be big with the likes of NaVorro Bowman and Aldon Smith out for the first half of the season.

In total, San Francisco’s Week 1 performance quieted skeptics that indicated Jim Harbaugh has lost his locker room and the team was set for a down season. It’s still one of the most talented in the NFL. And Sunday’s performance is a prime example of this.

8. Big Ben and Co. firing on all cylinders 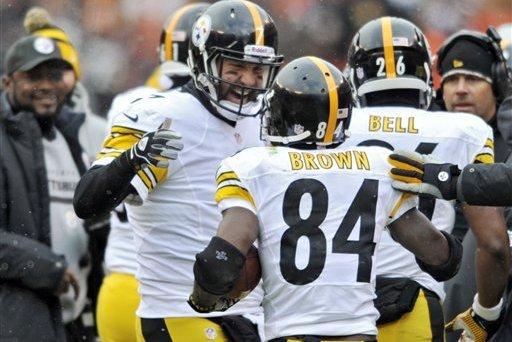 The Steelers offense is going to be great moving forward.

Ben Roethlisberger and the Steelers first-team offense looked mighty good during the preseason. And they were able to continue that success into the regular season. The Super Bowl-winning quarterback completed 23-of-34 passes for 365 yards and a score. More important than that, the Steelers showed some balance on offense with Le’Veon Bell, who gained 109 yards on 21 carries.

While there are some concerns over pass protection in front of Big Ben, this offense looks elite right now. Unfortunately for the Steelers, they let the Cleveland Browns back in the game after taking a 27-3 lead into the half. Brian Hoyer and the Browns put up four consecutive scores in the second half before Pittsburgh came away with a game-winning last-second field goal. That has to be reason for concern for Mike Tomlin’s squad. 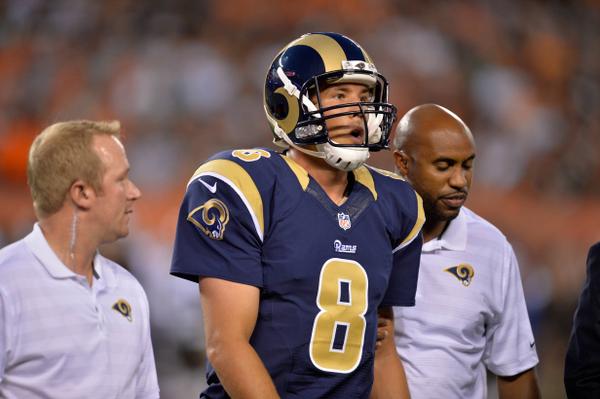 Bradford’s injury means that the Rams defense must play better.

Ouch. That one word pretty much sums up St. Louis’ Week 1 performance in its 34-6 loss to the Minnesota Vikings at home. Shaun Hill, who is being asked to replace an injured Sam Bradford for the season, was removed with a quad injury late in the first half. He was then replaced by mediocre third stringer Austin Davis, who completed 16-of-23 passes on the day.

That’s not the big story here. The Rams defense allowed three scoring drives of nine-plus plays against a Vikings offense that while talented, simply isn’t at an elite level right now. They allowed Matt Cassel, who managed the game beautifully, a clean pocket for most of the game. That’s not the MO of a defense that boasts the most talented front four in the NFL.

Without much of an offense to speak of, the Rams desperately need better performances from their defensive if they’re going to be competitive in the best division in football. If not, we could very well be looking at Jeff Fisher’s squad selecting in the top five of the NFL draft come next May. 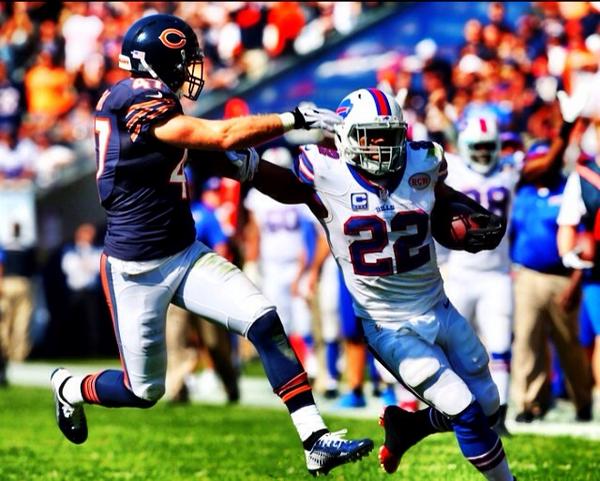 It doesn’t matter what the Bears offense does if their defense plays like this.

Since when were the Buffalo Bills an offensive juggernaut? I guess that happens when they play a defense that is just bad. Buffalo put up 369 yards on offense, including 193 on the ground, against an atrocious Bears defensive front. Heck, even veteran special teamer Anthony Dixon broke off a 47-yard run.

If this doesn’t change moving forward, it really won’t matter how good the Bears offense is. They simply won’t be able to outscore their opponents on a consistent basis throughout the season. And that could very well cost Chicago a trip to the postseason.