A regular season that was marred by off-field issues, a coaching fiasco in San Francisco and some downright horrible nationally televised football games has come to an end. A total of 17 weeks have passed, and only 12 teams remain with a shot at hoisting the Lombardi Trophy.

From the surreal scene in Santa Clara to the Atlanta Falcons laying a complete egg at home against the Carolina Panthers, here are 10 takeaways from NFL Week 17.

Before the fans even had an opportunity to exit Levi’s Stadium on Sunday, the San Francisco 49ers released a statement indicating that the team and former head coach Jim Harbaugh have agreed to “mutually” part ways. This is something we all knew was coming, but it doesn’t make the situation any less odd.

Harbaugh finishes his 49ers coaching career with a 49-22-1 regular season record. By pure winning percentage, this mark ranks Harbaugh among the five-winningest head coaches in the history of the NFL. And now that Harbaugh is fully prepared to take the Michigan head coaching job, San Francisco is left to look for a new head coach. A search that, as the team indicated in its press release, has already started.

2. The Carolina Panthers Stand a Real Chance to Win a Playoff Game

With Arizona’s loss to the San Francisco 49ers, Bruce Arians’ squad will now travel to take on a Carolina Panthers team that won the NFC South despite finishing under .500. They will do so as clear road underdogs with a third-string starting quarterback. They will do so going up against a Panthers team that has won four consecutive games and are averaging nearly 28 points per game during that span.

Speaking of the Panthers, they seemed completely out of the NFC Playoff race just a month ago. Since then, both the Atlanta Falcons and New Orleans Saints have let what was a struggling team inch back into the race. Considering the fact that Carolina won one game from Week 3 up until early December, this is absolutely ridiculous. It also goes to show us just how bad the NFC South was.

But now, Carolina has a home playoff game against a Cardinals team that is ravaged by injuries and has lost four of six since starting the season 9-1. There’s a real good chance Carolina earns the win here and takes on either Green Bay or Seattle in the divisional round. 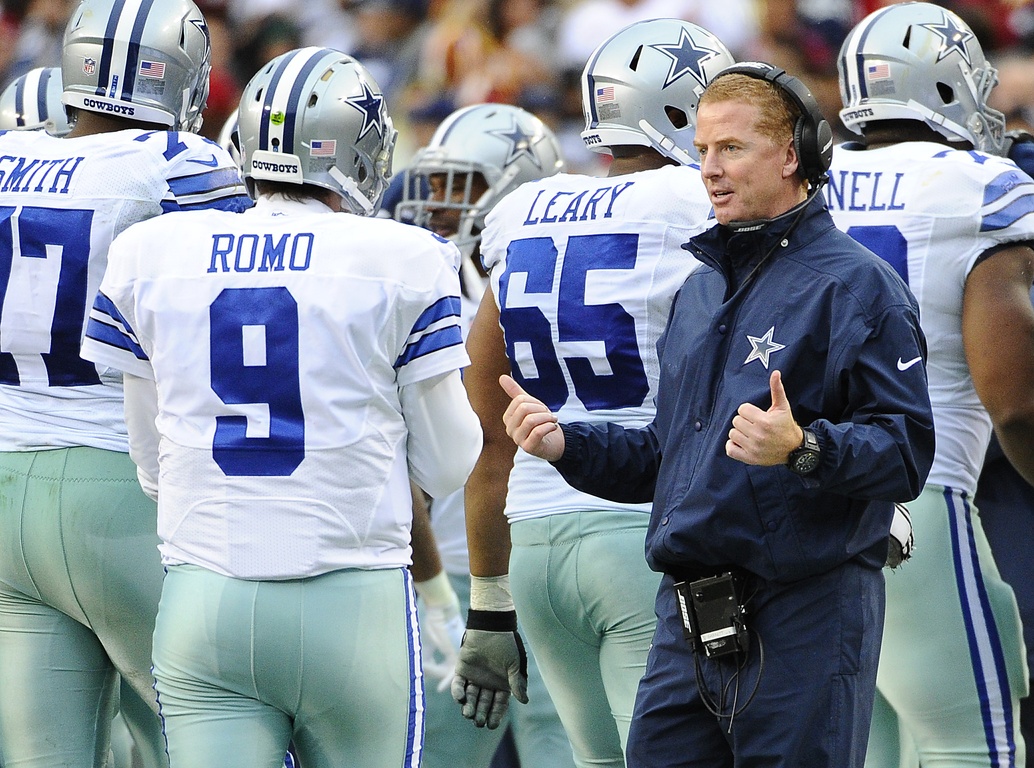 Courtesy of USA Today: It’s been a while since the Cowboys have been serious Super Bowl contenders.

Following a dominating 44-17 win over the Washington Redskins, Dallas now heads into the postseason winners of four in a row. During that span, Jones’ boys are averaging over 41 points per game and are defeating their opponents by more than three touchdowns per game. Talk about a team that has a reputation for struggling late in the season ending this year on a high note.

From Tony Romo and Dez Bryant in the passing game to DeMarco Murray on the ground, the Cowboys offense looks nearly unstoppable. Without much to play for against Washington, this unit amassed over 450 total yards on Sunday. If the Cowboys offense can continue to dominate, they are going to be incredibly hard to beat come January. This doesn’t even take into account a defense that has now forced 10 turnovers in the past three games.

4. Contenders and Pretenders are Quite Obvious in the NFC

It’s the Seattle Seahawks, Dallas Cowboys and Green Bay Packers in the NFC. Based off recent performances and talent level, the rest of the NFC Playoff field doesn’t stand much of a chance. As the defending Super Bowl champions, Seattle has to be considered odds-on favorites to represent the conference in Arizona come February, but the Cowboys made a statement against Seattle earlier this season and seem to be playing their best football of the past decade.

As it relates to Seattle and Green Bay, one of these two teams is going to have a pretty clear path to the NFC Championship game. Depending on the outcome of the Cowboys-Lions matchup, either Seattle or Green Bay will take on the winner of the Cardinals-Panthers game. And based off what we indicated above, that could very well be Cam Newton and Co. If so, it will be a team that finished under .500 heading into a hostile environment to take on a heavily-favored and rested squad. You do the math there. In any event, we are sure to get a great NFC Championship game in a few weeks.

With an opportunity to earn a playoff spot, both San Diego and Atlanta fell flat on Sunday. For the Chargers, it was all about a lack of pass protection. Philip Rivers went down seven times, as the Chargers offensive line was dominated by a vastly superior Kansas City Chiefs defensive front. For a team that started the season 5-1, the Chargers sure did struggle in the second half of the season, losing six of their last 10 games.

Atlanta was handed a home game against a team in the Panthers that simply didn’t belong in the playoff conversation just a month earlier. Mike Smith’s squad proceeded to lose at home by 31 points. You read that right, 31 points. Matt Ryan had two interceptions returned for touchdowns as the Falcons turned the ball over a total of three times. In reality, this loss pretty much ended Smith’s tenure as Atlanta’s head coach, and for good reason. How do you not get up for a do-or-die game in Week 17? 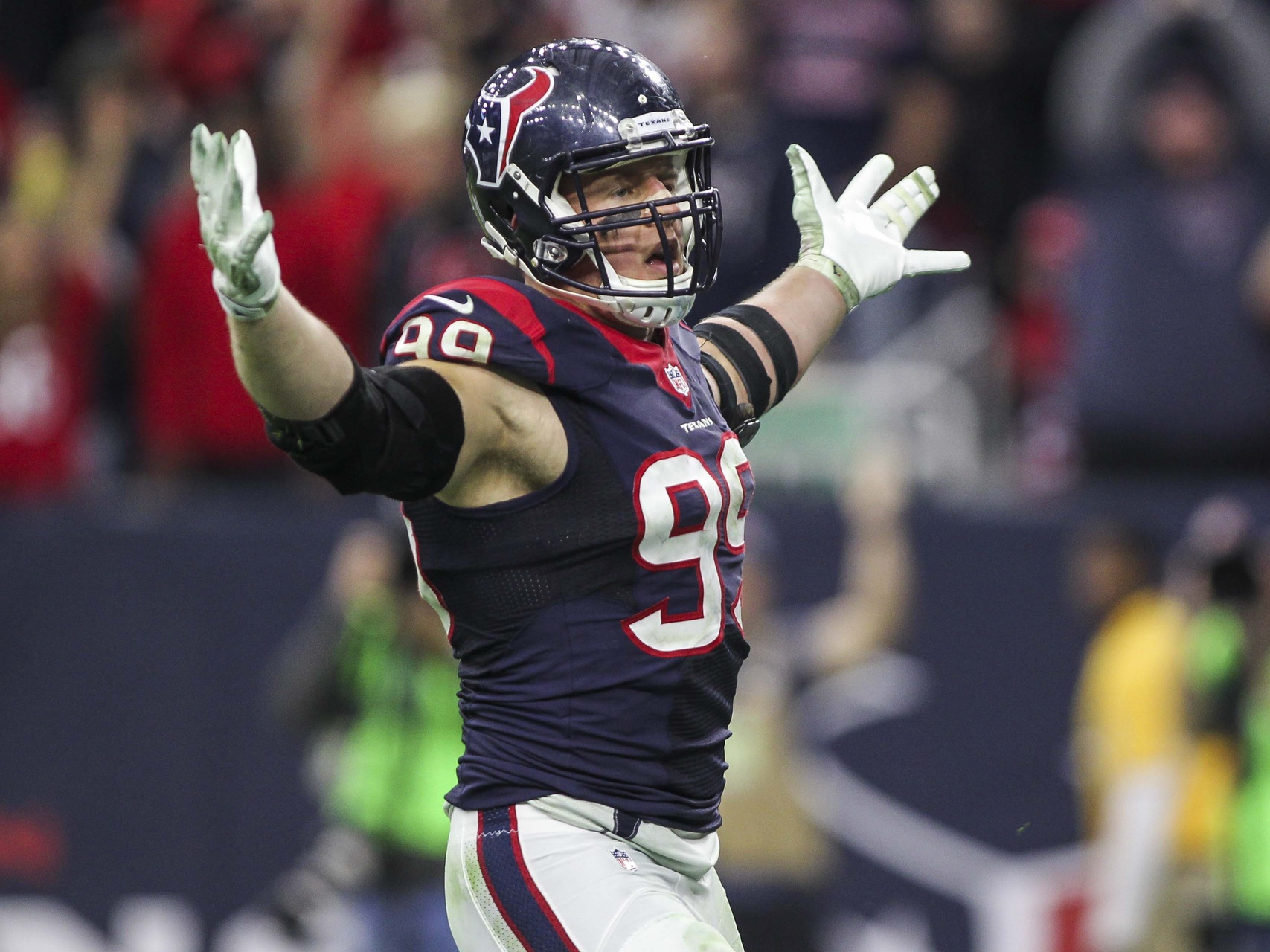 If you ask me 10 times how the Houston Texans finished with nine wins this season, my answer will be J.J. Watt all 10 times. What he was able to do this season, especially with the focus of the offensive line directed squarely at him, was nothing short of extraordinary. Watt finished up what could very well be an MVP campaign by recording six tackles, four for loss and three sacks in the season finale. He’s now the only player in NFL history to put up 20-plus sacks twice in his career (21.5 this season).

More than that, Watt’s presence was felt on a continual basis for a Texans team that needed him to play elite football. Not since the days of Reggie White and Lawrence Taylor have we seen this type of domination from a defensive player. And for that alone, Watt should receive some first-place MVP votes. In fact, he has mine.

It’s upon us. The day head coaches around the NFL dread. From Jim Harbaugh’s ousting in San Francisco to Marc Trestman’s likely departure in Chicago, there promises to be at least a half dozen coaching openings by the end of the work week.

We can pretty much guarantee that Tony Sparano (Oakland), Rex Ryan (New York), Mike Smith (Atlanta) and Marc Trestman (Chicago) will be given their walking papers. In addition to this, Gus Bradley (Jacksonville), Ken Whisenhunt (Tennessee), Jeff Fisher (St. Louis) and Jay Gruden (Washington) could all be shown the door.

This also means a ton of speculation around the NFL about potential replacements. And to be honest, it starts and ends with the San Francisco 49ers, who have to be the most attractive destination. Following the departure of Harbaugh, all eyes are going to be on CEO Jed York and Co. That promises to make for a couple intriguing weeks in Northern California.

8. Only One Real Home-Field Advantage Heading Into the Playoffs 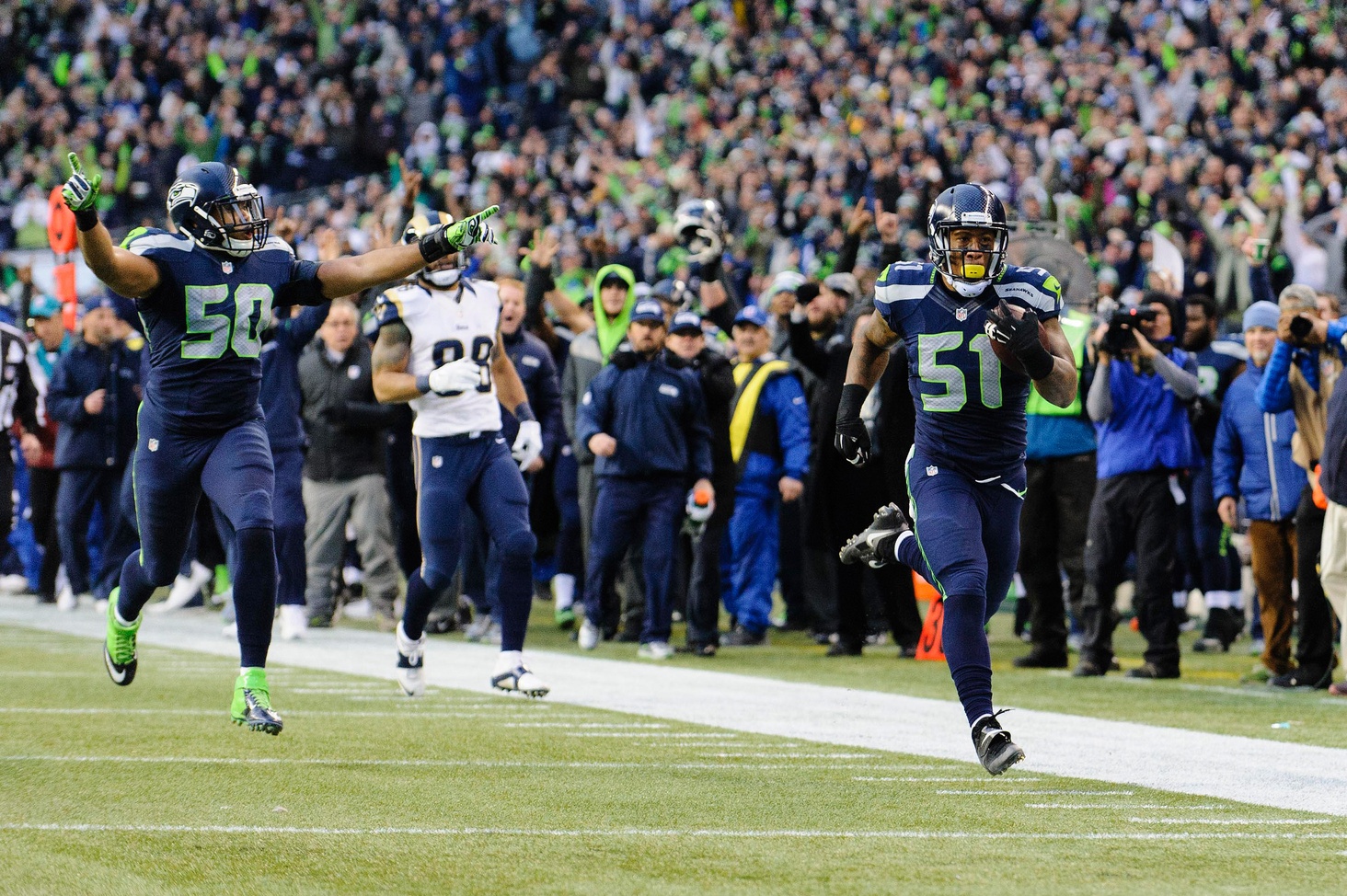 Courtesy of USA Today: Seattle has to be considered favorites to win a second straight title.

Winners of six in a row and nine of 10, the Seattle Seahawks appear to be the class of the NFL heading into the playoffs. During its current six-game winning streak, Seattle has outscored it opponents by nearly 100 points. It’s playing dominating football on defense and continues to ride the amazing running ability of one Marshawn Lynch. Interestingly enough, this is the very same formula that led Seattle to the Super Bowl less than a calendar year ago.

And despite the fact that Dallas has already defeated the Seahawks in the Pacific Northwest this year, it must be noted that Seattle is playing much better football than it was in Week 6. Could we be looking at the first repeat champion since the New England Patriots a decade ago?

9. The Pittsburgh Steelers are a Dangerous Football Team

Depending on the prognosis of Le’Veon Bell’s knee injury, the Steelers are a team that the rest of the AFC should be worried about. Ben Roethlisberger is playing the best football of his career, Bell is among the top running backs in the NFL, and Antonio Brown just finished a regular season that saw him lead the NFL in receptions.

Pittsburgh opens up the playoffs at home next week against a Baltimore Ravens squad that inched into the playoffs and really doesn’t match up all too well with the Steelers offense. If Pittsburgh manages to win that game, it will then take on the Denver Broncos in a game that will be much closer than most people anticipate. Simply put, it’s hard to count out a team that has as many weapons on offense as the Steelers currently possess.

10. The Detroit Lions Have Backed into a Tight Spot

Raise your hand if you expect Matthew Stafford to go into Dallas next week and lead his team to a playoff win against the Cowboys? That honestly seems like an extremely unlikely scenario at this point. We all know how much Stafford struggles on the road against winning teams. Magnifying this further is the fact that he’s yet to win a playoff game as the Lions starting quarterback. And despite boasting a solid 11-5 record, the Lions simply don’t match up well with Dallas. We have all week to analyze this one, but the Cowboys couldn’t have asked for a better matchup in the wild card round. And for the Lions, it’s now all about proving skeptics like myself wrong.