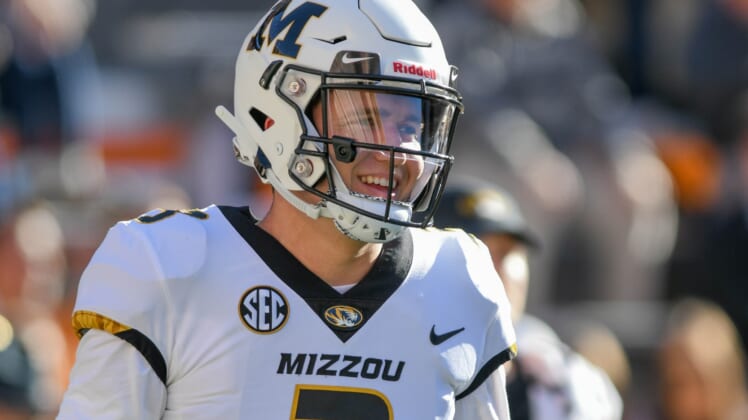 Every single draft pick is a risk. But looking ahead toward the 2019 NFL Draft it’s clear that some prospects who have tons of potential could also be big-time busts.

The NFL has seen its fair share of players who enter the league with incredible expectations heaped upon their shoulders due to their otherworldy athleticism and college success. Many fail to deliver, because the game of football isn’t all about being able to run like the wind or leap like a gazelle.

With that in mind, it’s time to take a look at the 10 riskiest 2019 NFL Draft prospects.

Even before Gary stepped foot on Michigan’s campus he was among the most hyped prospects in the nation. Blessed with dynamic athleticism, elite explosion and ideal size, Gary was supposed to be a superstar. He never truly lived up to the hype playing for the Wolverines, however. An inconsistent player who had big moments and also disappeared at times, his play did not match his potential.

Gary once more showed off his freaky athleticism at the combine. He blazed the track with a 4.58-second 40 and posted incredible numbers in the vertical (38 inches) and broad jump (10-foot). So, the hype remains a big factor for Gary. Yet teams will have to do some serious soul searching when it comes to whether they’re willing to invest a top draft pick in a player who has failed to dominate like his potential dictates.

Brown put up tremendous stats the past two years at Oklahoma. Going against Big 12 defenses for the most part, he racked up 132 receptions for 2,413 yards and 17 touchdowns. He’s also a very good route-runner who showed his blazing speed often in college on huge plays like this.

Unfortunately, Brown has two things going against him. The first is at least hopefully just a temporary issue: He recently had foot surgery to repair a Lisfranc injury. The second issue is a bit more of a permanent problem, which is that Brown is just 5-foot-9 and 166 pounds. That’s very, very small by NFL standards. And his size could be a big deterrent to being a truly versatile weapon at the NFL level.

This is an unfortunate inclusion, as Simmons had a real chance to be a top-10 player in this year’s draft before disaster struck. He tore his ACL in February training for the combine, which of course puts him out of commission for the better part of a year.

One of the most dominant defensive tackles in college football last year, Simmons is a player who has the potential to become a perennial All-Pro at the next level. Unfortunately, his injury hurts his stock, obviously. The bigger problem is there is now some risk associated with selecting him in the first couple of rounds and redshirting him — a prospect that’s been hit and miss for teams in recent years.

If it looks like a duck and sounds like a duck, it’s probably a duck. At least, that’s true unless you’re evaluating college football quarterbacks. Take Lock, for example. He’s a kid who measured in at 6-foot-4 and 228 pounds, has a big arm and showed off very good athleticism running a 4.69-second 40 along with some solid jumps. You can almost hear the drool puddling on John Elway’s desk.

Yet Lock (who looks a lot like Jay Cutler on the field) comes to the 2019 NFL Draft with a big red flag: He’s not the most accurate of quarterbacks, and his production fell off last year compared to his top season at Missouri in 2017. For his career, Lock completed under 60 percent of his passes. And as so many talent evaluators like to say, accuracy is one of the traits you just cannot coach.

Is Bush a very good prospect who has a chance to succeed at the NFL level? Heck yes, he is. Is Bush a transcendent talent who might just be the second coming of Patrick Willis? No. No he is not. Yet after the incredible combine he put together, some folks are thrusting him not only into Round 1, but all the way up into the top half. That’s insane.

There’s a chance a few NFL teams will have that kind of love for Bush, too, based on the way he flies around the field. Yet when compared to elite linebackers, he falls short when it comes to instincts, and being able to disengage from offensive linemen in run support. He’s freaky athletic, but an instant-impact, three-down linebacker Bush is not (yet).

Metcalf put on an epic show at the combine. The dude is absolutely chiseled. He’s big, too, at 6-foot-3 and 228 pounds. And he ran a 4.33-second 40, jumped 40.5 inches in the vertical and posted a 11-foot-2 broad jump. Freaky, freaky stuff. Some have started comparing Metcalf to Julio Jones, and honestly some of the numbers do match up.

But Metcalf was putrid in the agility drills. He also comes with a significant red flag due to injury history. We detailed both of this issues here if you’re looking for a deeper dive. Long story short, any team thinking about taking Metcalf in the top 10 this April will be rolling the dice in a big way.

From one physical freak to another, Sweat may have been even more impressive during the combine than Metcalf was. Coming in at 6-foot-6, his 4.41-second 40 all by itself was enough to boost his stock. Sweat also showed out well in agility drills, running a 7-second 3-cone drill and 4.29-second short shuttle.

Unlike Metcalf, Sweat also had good production the past couple of years in college, posting 98 tackles and 19 sacks. Yet Sweat brings a raw game to the next level. He has average strength and tends to rely too much on speed, which would be fine if he had better hands. He’s a project with vast potential, and as always that can be a scary word around the NFL.

Touted as a potential first-round pick in the 2019 NFL Draft heading into the combine, Little put together a really bad showing overall in Indianapolis. A guy who possesses ideal size for a left tackle at 6-foot-5 and 310 pounds, he performed much worse than his peers who are considered to be at this year’s draft class. Running a 5.33-second 40 was second-worst among offensive linemen. His 25-inch vertical was third-worst.

Even worse, Little looked bad during field drills, truly hurting his cause. Combined with inconsistent play at Ole Miss, Little really is a big risk and could end up seeing his stock fall.

One of the hot names in a loaded class of edge rushers, Polite appears to have tanked his stock with an abysmal overall combine experience. His 2018 season at Florida was awesome, as Polite was a force behind the line of scrimmage racking up 19.5 tackles for a loss and 11 sacks. One of the big things that stood out was that he seemed to have a quick first step.

Yet Polite showed up a bit heavy at the combine and ran a 4.84-second 40 (third-worst among edge defenders). His 1.71-second 10-yard split was terrible, too. Even worse, he did not impress during interviews. Due to his impressive season at Florida, it stands to reason that some team will take a gamble on Polite. Yet it could be costly.

Because Murray is almost certainly going to be a top-2 pick come April, and because the long-term hopes and dreams of one franchise will hinge on this selection, he’s the riskiest player in the 2019 NFL Draft.

Of course, a lot of this risk comes simply due to the fact that, in the history of the NFL, a player of his stature (5-foot-10) has never truly lived up to franchise quarterback status. Murray is supremely talented. He has incredible dual-threat abilities that should translate well to the modern NFL. But it’s going to take the perfect marriage, with the right coach and system, to put it all together for long-term success.