10 NFL rookies with the biggest bust potential in 2019 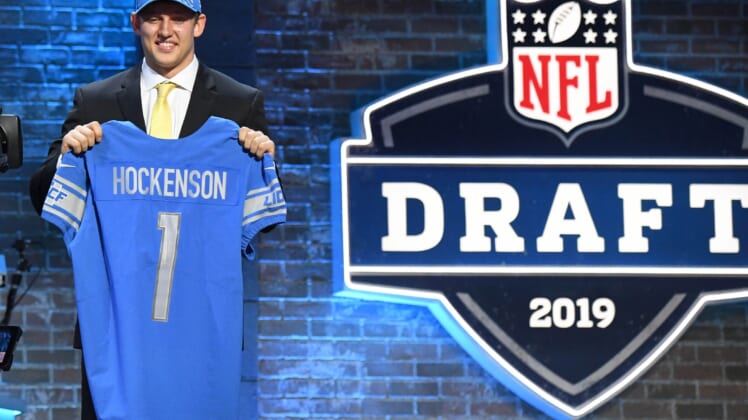 There are a number of high-round NFL Draft picks that tend to struggle big time as rookies. This doesn’t mean said youngsters can’t turn it around. Rather, it’s all about an inability to make an impact out of the gate.

This season will be no different. From a pass rusher in Oakland who went much higher than anticipated to the reigning Heisman winner, there’s a number of rookies who have big time bust potential in 2019. Here’s a look at 10 of them.

Despite three highly productive seasons with Clemson, no one really expected Ferrell to be a top-20 pick in April’s draft. That’s why it was such a surprise he went No. 4 overall to Oakland. We know full well the Raiders need pass-rush help after trading away Khalil Mack last summer. In no way does this mean Ferrell will be able to provide that out of the gate. He’s not going to have a ton of help in Oakland’s front four, which will lead to offensive lines focusing on him big time. Expect a lackluster initial campaign from Ferrell.

The first receiver off the board in April’s draft, Brown has missed the start of Baltimore’s off-season program due to a postseason lisfranc injury he suffered following a brilliant career at Oklahoma. This is already going to set the 5-foot-10 pass catcher back as he looks to build a strong relationship with young quarterback Lamar Jackson. Another issue here is Jackson’s struggles throwing outside of the hashes last season. Couple these two things together, and it would not be a surprise to see Hollywood go off Broadway as a rookie in 2019.

The good news? Jones won’t start out of the gate as a rookie. That task will fall to Eli Manning. But if the Giants were to find themselves out of contention late in the season (a strong likelihood), it would not be a surprise to see head coach Pat Shurmur and Co. go with Jones. That’s where it becomes bad news. New York overdrafted this Duke product at No. 6 overall in April. He’s a true project in the mold of Buffalo Bills youngster Josh Allen. It’s not going to help that the Giants traded away Odell Beckham Jr. in March. The team would simply be best served sitting Jones this coming season. If not, it could get pretty ugly.

In terms of talent, Oliver was right there with No. 3 pick Quinnen Williams as the top defensive tackle in the draft. the 6-foot-1, 287-pound mammoth of a pass rusher was absolutely dominant during his Houston career. At issue here is a perceived lack of maturity and an inability to get along with coaches. Sure a lot of that could be narrative. Even then, there has to be some concern that Oliver will struggle initially with a hands-on defensive coach in that of Sean McDermott.

Combine warrior or not, it was a surprise to see the big-bodied Metcalf fall to the end of the second round. It was an absolute steal for Seattle as this team looks to replace Doug Baldwin at receiver. In no way does this mean the 6-foot-3 Metcalf is ready to make an immediate impact. He actually finished third for Ole Miss in receiving yards last season. That has to set off some alarms. It’s also important to note that the NFC West boasts some elite defensive lines. That will cause initial issues for Metcalf as he looks to gain separation within the confines of a faster game. Look for struggles in 2019.

Gary’s lack of production at Michigan certainly worried teams heading into the draft. He put up just 9.5 sacks in three seasons. That’s not elite-level production from the EDGE position. Add in injury concerns, and he fell all the way to Green Bay at 12 after being considered a potential top-five pick. We’re not expecting much production from the former Wolverine as a rookie. That’s magnified by the presence of high-priced free-agent signings Za’Darius Smith and Preston Smith in Green Bay. They’ll see action over Gary in 2019.

Let’s be clear for a second. This has more to do with tight ends in general struggling as rookies than anything else. Hockenson is an elite talent that should be a perennial Pro Bowl performer moving forward. At issue here is recency bias. Even some of the game’s best tight ends have struggled initially. Record-breaking pass catcher George Kittle caught just 43 passes as a rookie in 2017. Fellow elite tight end Travis Kelce missed all but one game of his rookie season. Zach Ertz of the Eagles? Well, he hauled in just 36 passes as a rookie. No matter how good Hockenson will end up being, expect him to struggle in 2019.

We’re not even sure at this point if Jacobs is going to be Oakland’s starter as a rookie. Head coach Jon Gruden seems to favor veterans. That could be a boon for Doug Martin and Jalen Richard. Secondly, the struggles of Derek Carr under center could play a role in Jacobs not being utilized to the best of his ability. Will teams stack the box against the former Alabama standout while daring Carr to beat them over the top? It’s something we saw last season in Oakland. Until the Raiders’ offense is straightened out, Jacobs is not going to be in a great position to succeed.

Flanked by Pro Bowl defensive linemen Dee Ford and DeForest Buckner, the consensus No. 1 player in this year’s NFL Draft should have a ton of help. Given just how dominant Bosa was during his Ohio State days, there’s every reason to believe he’ll produce immediately. Of course, that’s if he’s on the field. Just in his second OTA practice with San Francisco, Bosa suffered a strained hamstring. It should sideline him until training camp. Having torn his ACL in high school and following a core muscle injury last season, one has to wonder if Bosa is already injury-plagued. That’s a scary thought for the brass in San Francisco.

Muted expectations. That has to be the name of the game in Arizona. Rookie quarterbacks struggle. It happens. We’re talking about the biggest learning curve of any position. Add in the fact that Murray is coming from a legit college offense and will be coached by a college figure in Kliff Kingsbury, and this is magnified further. It’s not about his size. It’s not about projecting years down the road. Instead, Murray’s inclusion in this list is objectively about how big of a learning curve he’ll have as a rookie.