10 NFL players who will have a sophomore slump this season 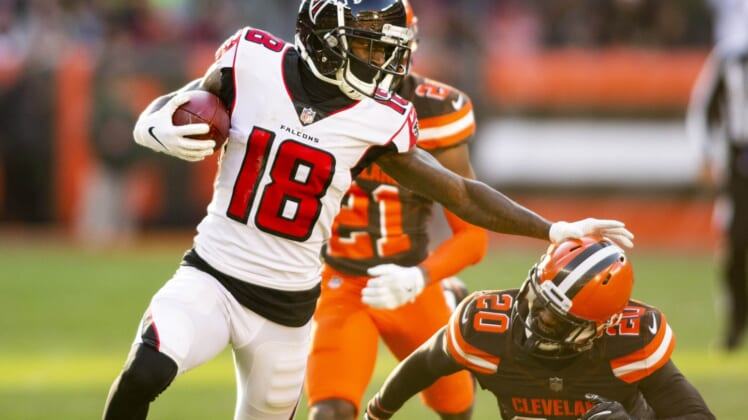 There were a number of rookies who excelled big time around the NFL last season. New York Giants running back Saquon Barkley dazzled onlookers with his performance. Baker Mayfield turned the ship around big time in Cleveland.

Not that these specific players will all slump as sophomores, but a number of youngsters might very well take a step back in 2019. Here, we look at 10 of them.

Most who followed Ridley’s career at Alabama knew that he had the talent and experience to make a tremendous initial impact in th NFL. That’s exactly what the 6-foot-1 pass catcher did, hauling in 64 passes for 821 yards and 10 touchdowns. Look for all of those numbers to decrease in 2019. Julio Jones is completely healthy and remains Matt Ryan’s go-to guy. Atlanta is also getting Devonta Freeman back after he missed all but two games last season. That will take targets from Ridley in a big way.

Define slump. Leonard’s rookie season was among the best for a defender in recent history. He recorded 163 tackles, eight passes defended and four forced fumbles en route to earning All-Pro honors. Expecting the small-school product to live up to this on a consistent basis isn’t realistic. We also must note that Leonard yielded a 80-plus completion percentage when targeted last season. Teams are certainly going to look to exploit that “weakness” in 2019. It should lead to a minor slump for the linebacker.

An undrafted rookie free agent out of Colorado last season, Lindsay made history be earning Pro Bowl honors. He recorded 1,278 total yards and 10 touchdowns at a pace of 5.6 yards per touch. The issues here are two-fold heading into his sophomore campaign. Lindsay underwent wrist surgery, which slowed him down during the team’s off-season program under new quarterback Joe Flacco. Secondly, new offensive coordinator Rich Scangarello is looking to get fellow second-year back Royce Freeman more involved in Denver’s offense this season. That could limit Lindsay’s touches.

If it weren’t for Leonard, there’s a good chance this former first-round pick would have won Defensive Rookie of the Year last year. Vander Esch recorded 140 tackles and two interceptions en route to earning a Pro Bowl appearance. Unfortunately, he’s going to be asked to take on a larger role on a Cowboys defense that lacks true play makers at the safety position. If the BYU product is stretched too thin in coverage, whatever shortcomings he might have will be exposed. That sets him up to be a prime candidate for a sophomore slump.

McGlinchey easily played at a Pro Bowl level as a rookie. Pro Football Focus graded him out as the best rookie offensive lineman last season, noting that the Notre Dame product was tremendous in the run-blocking category. Though, he did struggle to an extent in pass protection. That has to be a concern in front of Jimmy Garoppolo as the quarterback returns from an ACL tear. This is magnified by the lack of interior line talent in San Francisco. Out on an island against top-end edge rushers, it would not be a surprise if McGlinchey took a step back this season.

As with others, this is more about Ward’s brilliant rookie season than anything else. The former No. 4 overall pick recorded 11 passes defended and three interceptions. With Cleveland set to be pretty darn good in 2019, Ward is going to be facing a lot of pressure. Other teams will be playing from behind. They won’t be able to avoid throwing at him. It could lead to him giving up some big plays. Hence, his inclusion in this article

Barkley’s rookie season was amongst the best for a running back in modern NFL history. He gained a league-best 2,028 total yards and scored 15 touchdowns. There’s absolutely no doubting this dude’s talent. The issue here is in Jersey. The Giants will be relying on Eli Manning to start under center. That has not worked over the past several seasons, and with Odell Beckham Jr. in Cleveland, there’s no truly elite receiving threat. Defenses are going to hone in on Barkley, leading to struggles from the second-year back.

If The Dolphins were to simply make up their mind and play Fitzpatrick solely at cornerback, he would not be on this list. Apparently, that’s not going to happen. First-year head coach Brian Flores has intentions of playing the former Alabama stud at linebacker, corner and safety. That’s not exactly how you get the most from a physical young defensive back. It’s going to lead to struggles until Miami decided on a full-time position for this talented youngster to play.

Pats head coach Bill Belichick is fickle with his running backs. It’s led to major issues in the fantasy football community. He goes with the hot hand instead of relying on one true three-down back. That’s going to be an issue for a second-year back in Michel who struggled with consistency as a rookie. The presence of catch-first back James White and selection of Damien Harris in the third round of April’s draft magnifies this further. Michel might do well, but he’s not going to duplicate last season’s near 1,000-yard performance.

Despite this rookie undrafted free agent putting up north of 700 total yards at a pace of 5.3 yards per touch last season, Baltimore signed Pro Bowler Mark Ingram. That’s an issue for Edwards’ productivity as a sophomore. The presence of a running quarterback in Lamar Jackson magnifies this further. While we’d love to see how Edwards might perform in a full-time role with 250-plus touches, that’s not in the cards this season. It’s going to lead to regression from his rookie campaign.