10 NFL players battling for their jobs to close the season 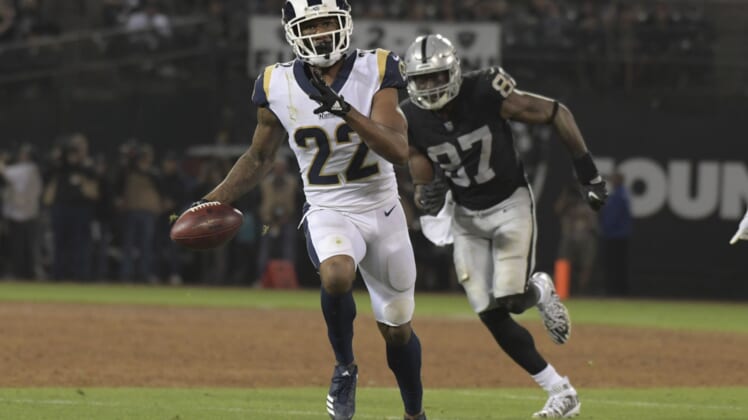 Players battling for their jobs

As the NFL enters the stretch run of its regular season, a ton of teams have pressure to close out the year in grand fashion. This also means individual players are battling for their jobs over the final two weeks.

Now that we know the Broncos will be firing their head coach, what does that mean for quarterback Case Keenum? Will continued struggles from quarterbacks Jameis Winston and Ryan Tannehill in Florida lead to each of them losing their jobs?

Here, we take a look at 10 NFL players battling for their jobs to close out the 2018 regular season. 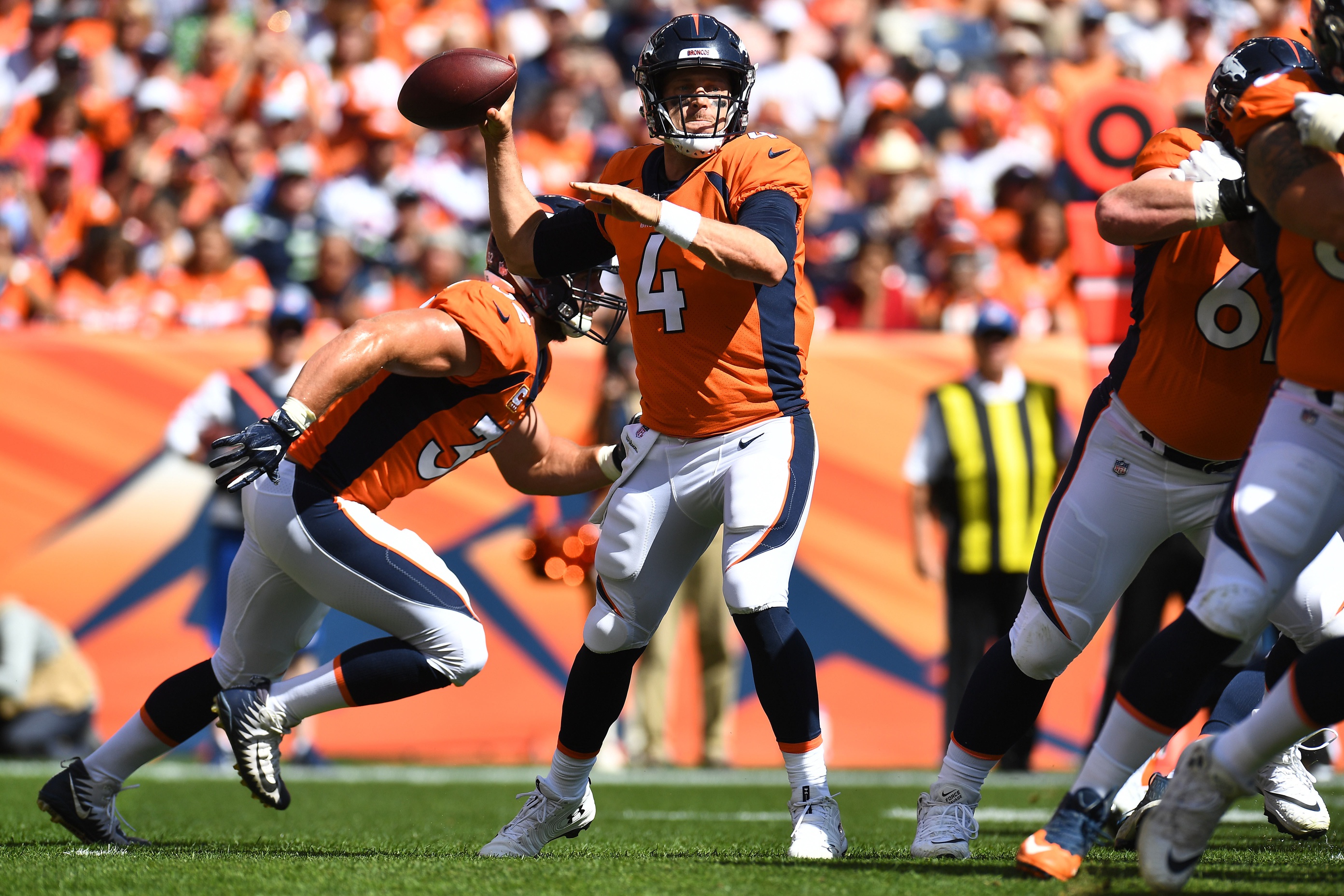 In the midst of what will likely be another losing season, the Broncos are going to move on from head coach Vance Joseph come Black Monday. This is just the start of what promises to be sweeping changes in Mile High. Struggling throughout the vast majority of his first season in Denver, Keenum could be another figure to lose his job. The career journeyman has put up just 15 touchdowns compared to 12 interceptions in 14 starts this season.

A new head coach will certainly take into account these struggles. But how Keenum performs against the Raiders and Chargers to close out the season will play a role. Signed to a two-year, $36 million deal back in March, Denver can save $11 million against the cap by releasing Keenum. 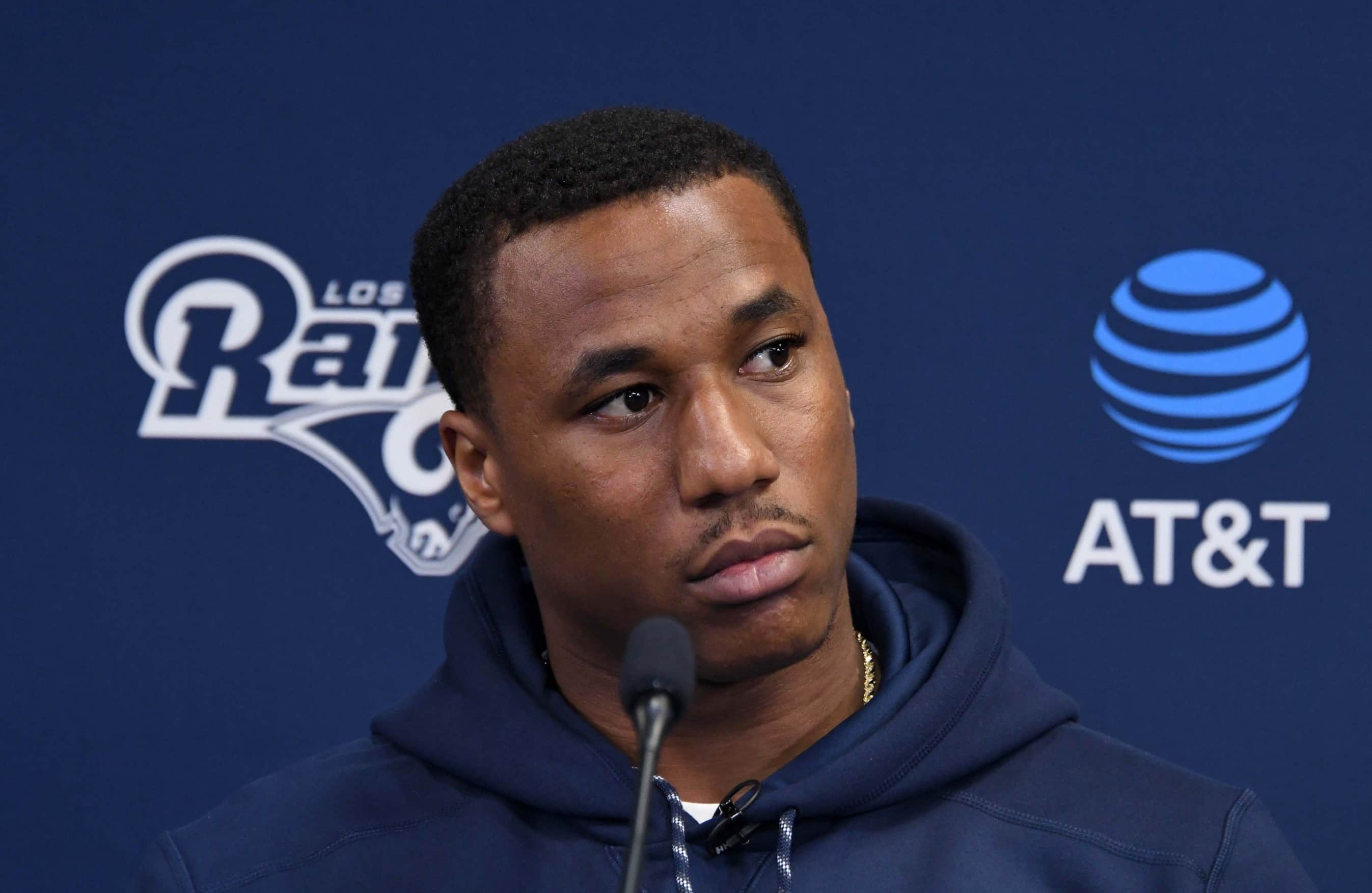 To say that Peters has been a disappointment since the Rams acquired him from Kansas City in an off-season trade would be an understatement. After earning two Pro Bowl performances in his first three years, the soon-to-be 26-year-old cornerback has regressed big time in 2018. According to Pro Football Focus metrics, Peters ranks in the bottom 10 out of 100-plus qualified cornerbacks this season. That’s just all sorts of terrible.

Given that Los Angeles exhausted a ton of draft capital to acquire Peters, common logic seems to suggest that it will hang on to him for the 2019 campaign. But with a $9.1 million salary that’s guaranteed for injury only, we’re not too sure. At the very least, GM Les Snead and Co. could entertain trade scenarios while replacing him in either free agency or the draft. 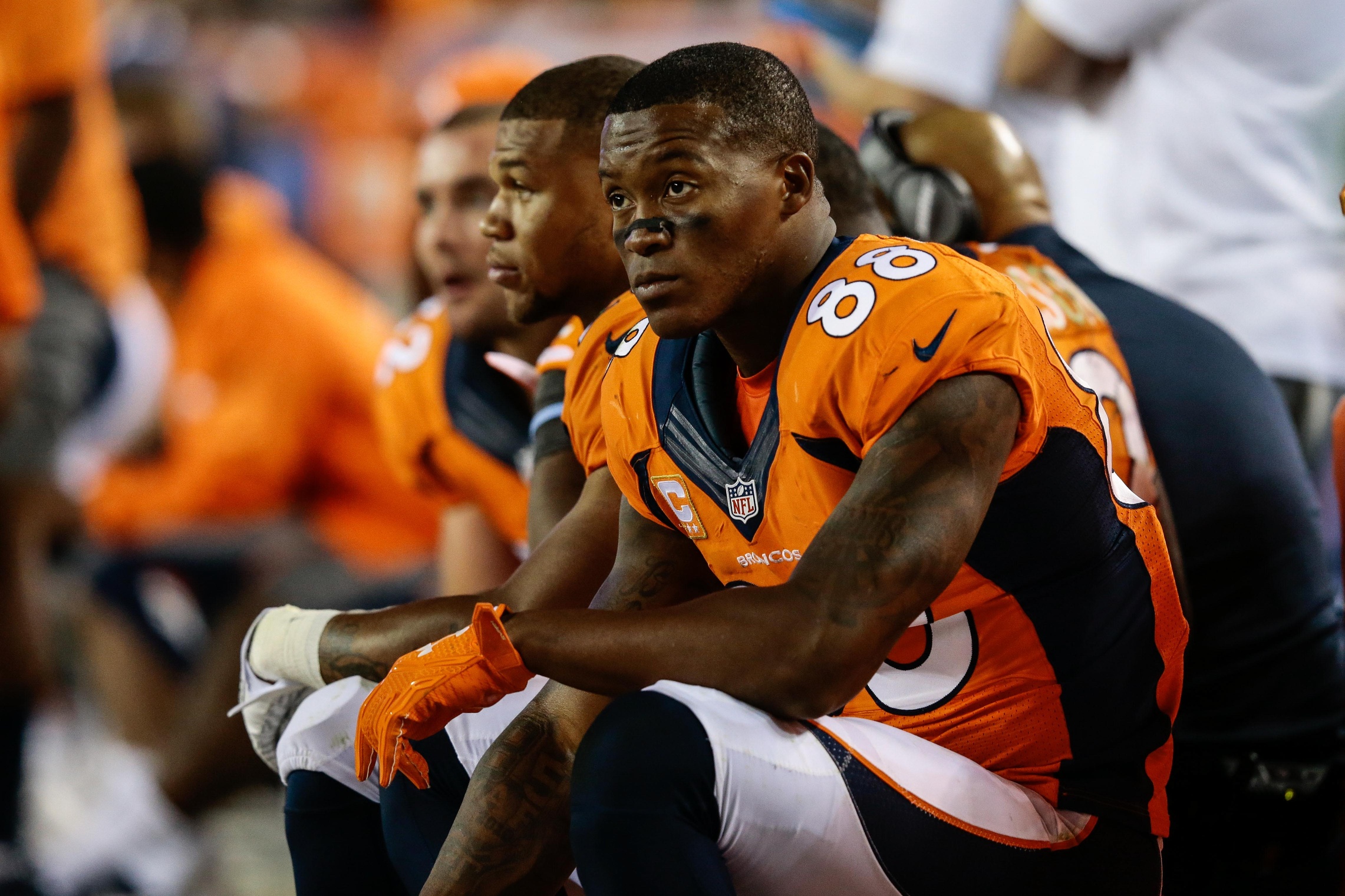 Houston exhausted a mere fourth-round pick in the 2019 NFL Draft to acquire Thomas from the Broncos back in October. The hope was that this four-time Pro Bowler would fit in nicely opposite DeAndre Hopkins after Will Fuller was lost for the season. Through six games, it has not necessarily worked out that well. Thomas has caught just 20 passes for 238 yards and two touchdowns. Extrapolated throughout a 16-game season, that equates to a 53-635-5 split.

Those numbers are not indicative of a player that’s set to count $14 million against the cap in 2019. Houston can also get out from under Thomas’ contract with a zero dead money hit. It’s important that Thomas proves his worth to the Texans throughout the final two games of the regular season and into the playoffs. 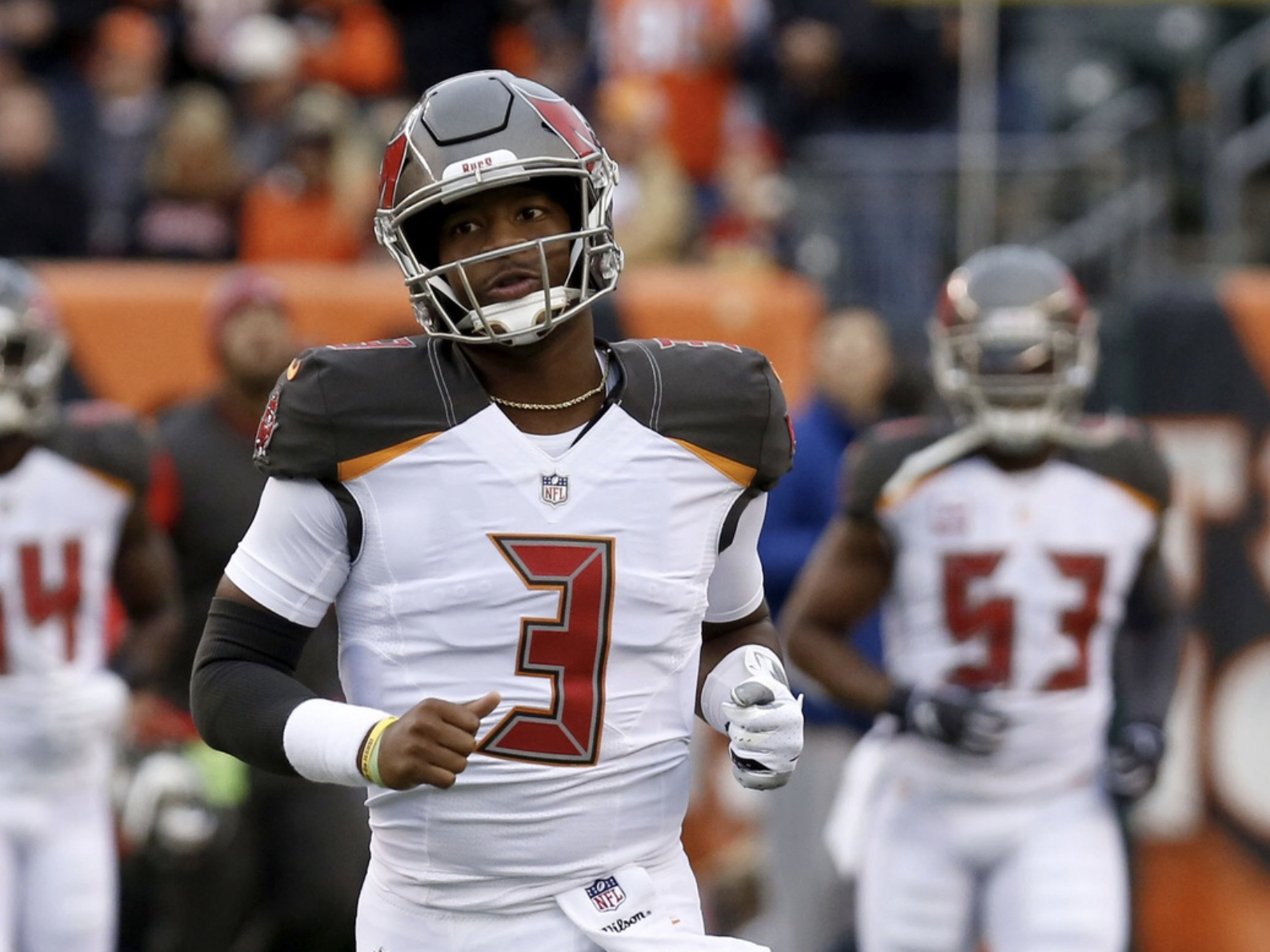 Winston’s future in Tampa Bay will likely depend heavily on what happens with head coach Dirk Koetter after the season. If Koetter somehow retains his job after a second consecutive disastrous campaign for the Buccaneers, there’s a decent chance Winston will be back.

On the other hand, a new head coach might want to start anew at quarterback. Winston’s performance has dipped in recent seasons, culminating in him throwing 14 touchdowns against 13 interceptions in nine games (seven starts) this season. Given that Winston’s $20.92 million salary for 2019 is guaranteed for injury only, Tampa Bay can get out from said deal rather easily. It will be interesting to see how the former Heisman winner finishes what has been a lost season in Tampa Bay. 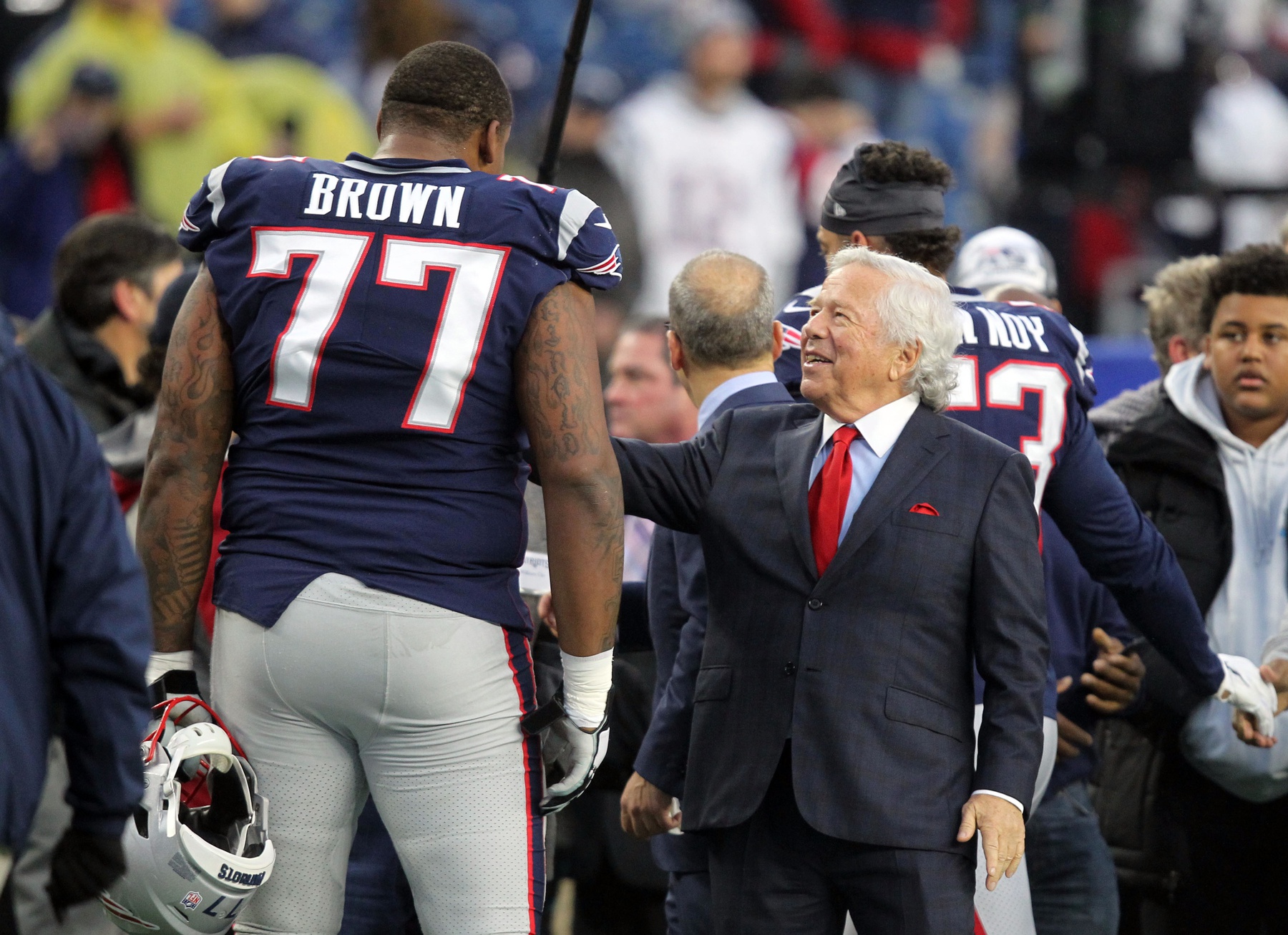 On the surface, Brown seemingly fortified New England’s pass protection in front of Tom Brady after being acquired from the 49ers this past spring. That’s just on the surface. Continually dealing with conditioning issues and a plethora of pre-snap penalties, Brown has regressed from a soild earlier-season performance.

It’s now not known whether other NFL teams view the impending free agent as a starter-caliber left tackle. That’s relatively big news given that right tackles are paid a lot less than franchise blindside protectors. It’s also possible that more struggles through the final two weeks of the season will force New England to decide to look elsewhere at left tackle once the offseason gets going. 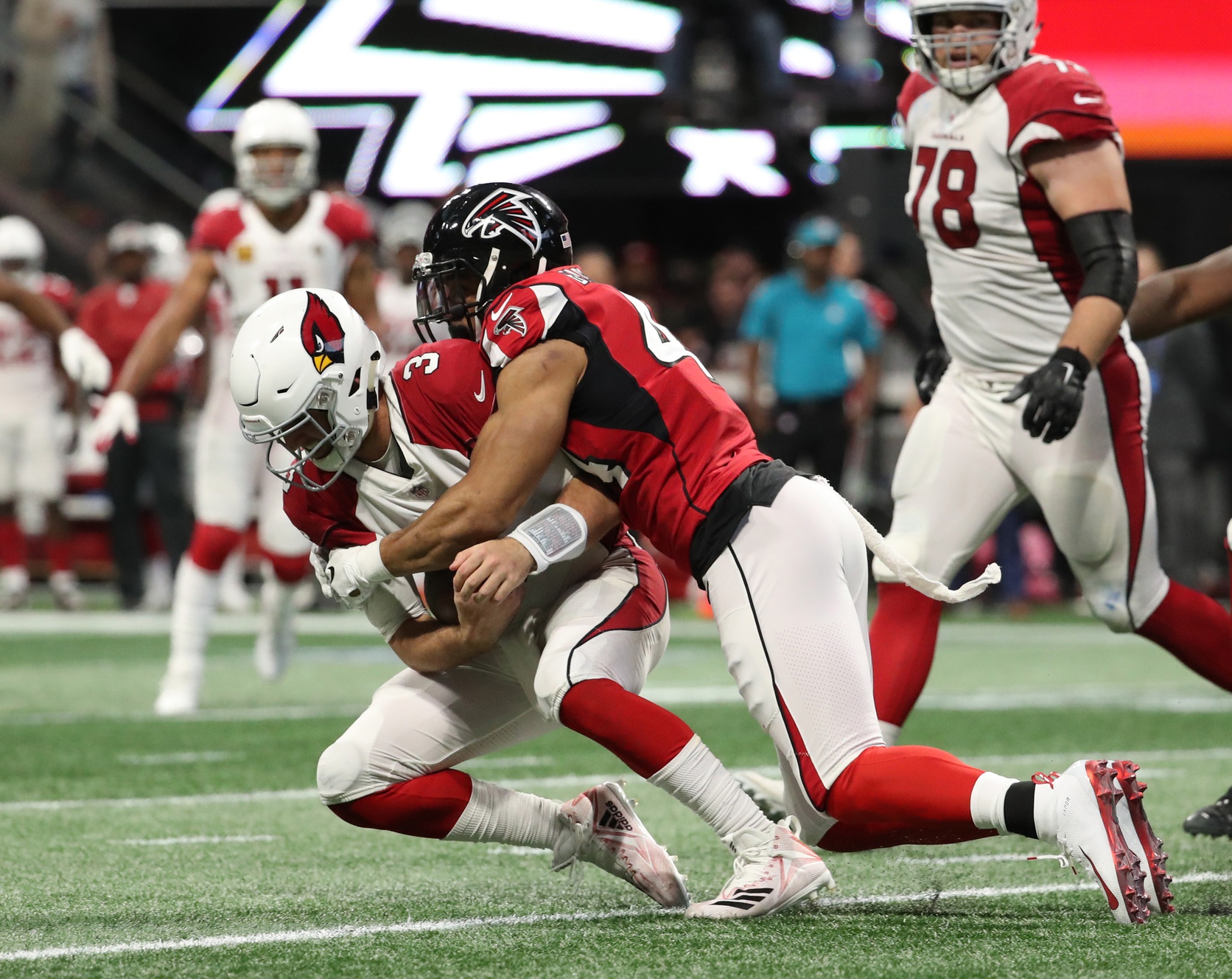 It was just two short seasons ago that Beasley was among the best pass rushers in the game. In helping Atlanta to the Super Bowl black in 2016, the former top-10 pick led the NFL in both sacks (15.5) and forced fumbles (six). His reward was a first career All-Pro selection.

Unfortunately for the still-young pass rusher and his team, Beasley has been nowhere near as effective over the past two seasons. That span has seen him record all of 10 sacks and one forced fumble in 28 games. With the Falcons likely to fire defensive coordinator Marquand Manuel, it’s not yet known whether Beasley will be a scheme fit moving forward. He’s set to earn $12.8 million next season, a number that’s guaranteed for injury only. The Falcons can release him without taking a cap hit. Though, the more likely scenario is a trade to a team that Beasley’s talents will be utilized better. 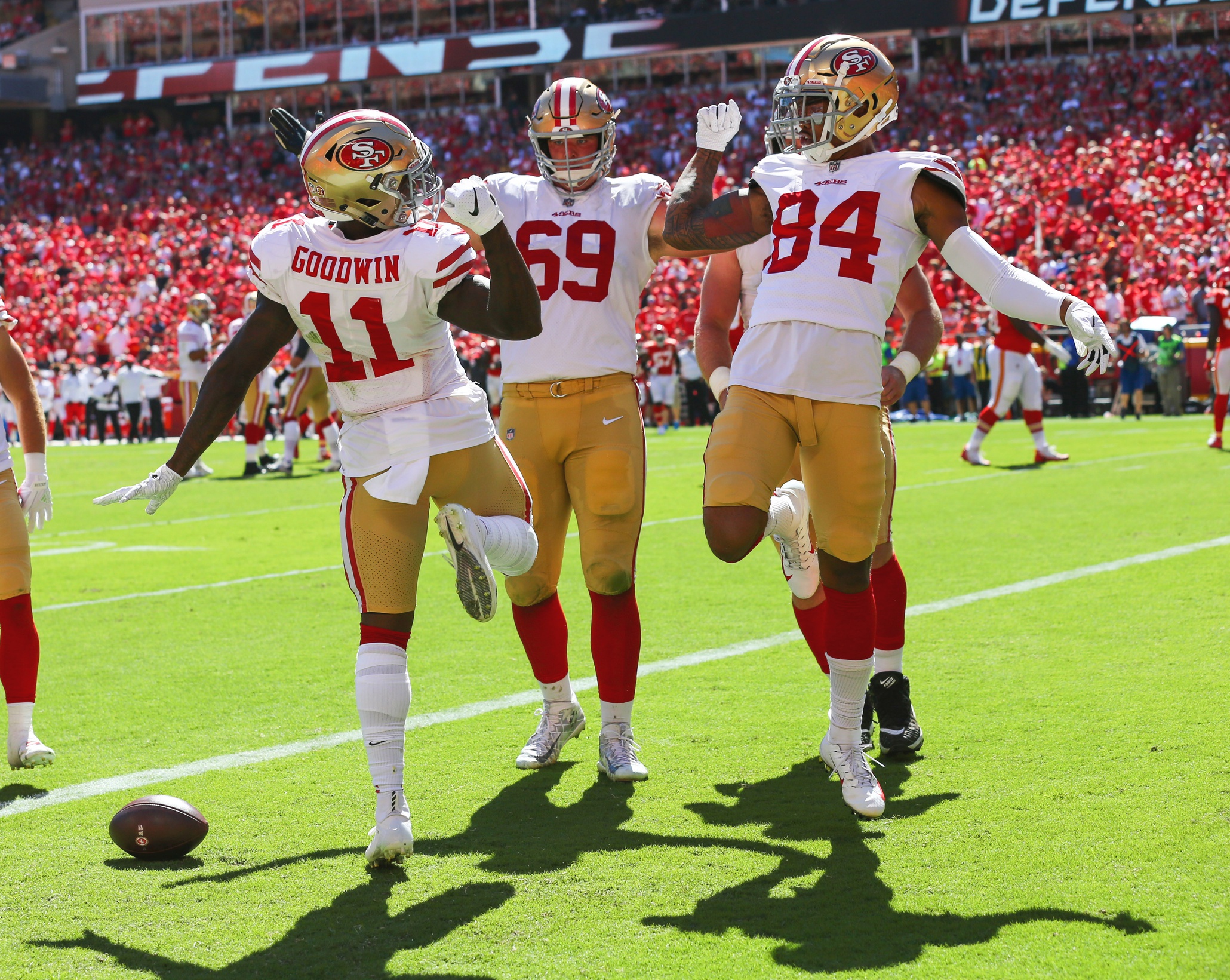 The feel-good story of last season, Goodwin signed a three-year, $19.25 million extension with San Francisco this past spring. That came on the heels of him totaling nearly 1,000 yards in his first campaign in Northern California. The issue here is that the injuries Goodwin dealt with in Buffalo have popped back up in 2018. He’s missed four games with various ailments and heads into Week 16 with less than 400 receiving yards.

San Francisco obviously isn’t looking to move on from Goodwin outright. Instead, the emergence of rookie pass catcher Dante Pettis and what promises to be a ton of cap room this offseason leads us to believe Goodwin could be relegated to No. 3 wide receiver duties moving forward. Depending on how this all plays out, there’s also a possibility he could be traded. 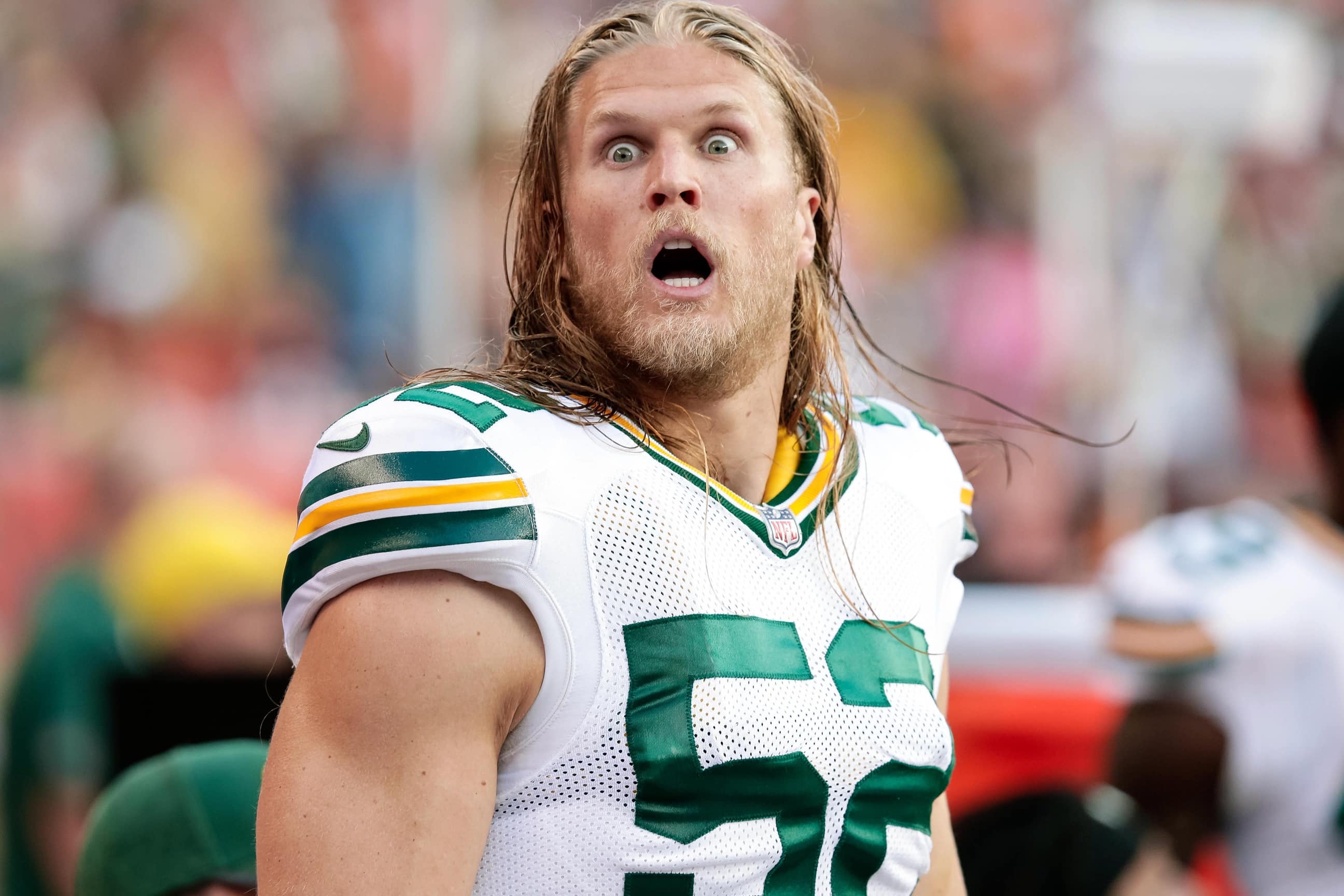 Packers general manager Brian Gutekunst has not been afraid to make the difficult move since taking over for Ted Thompson. It started with the release of Jordy Nelson last spring and culminated in the in-season firing of longtime head coach Mike McCarthy. Gutekunst has obviously changed up the MO of his former front office. And now, with the Packers closing up shop on a lost season, we’re expecting further changes in 2019.

That could include one of the best defensive players in the history of the franchise. A six-time Pro Bowler, Matthews has regressed big time in recent years. He’s put up 23 sacks over the past 56 games. That came on the heels of the USC product combining for 31 sacks between 2012-14. An impending free agent, maybe Matthews will show out over the final two games to give the Packers’ brass something to think about. We highly doubt it. 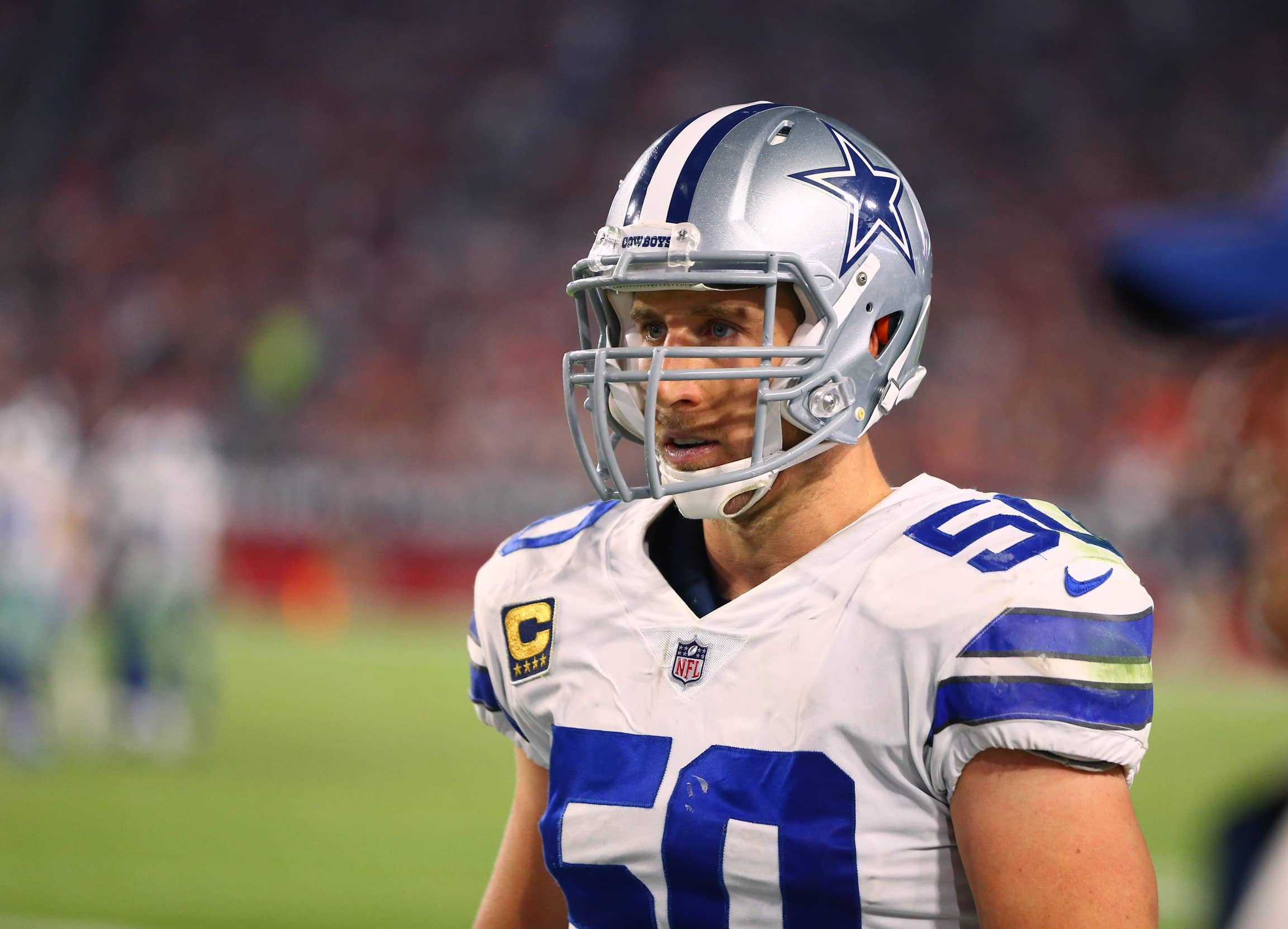 The emergence of linebackers Jaylon Smith and Leighton Vander Esch has made Lee expendable moving forward. This two-time Pro Bowler’s injury issues obviously haven’t helped matters, either. Lee has missed eight games to injury this season and a total of 32 games since the start of the 2014 campaign. It’s really been difficult for the Cowboys to rely on their defensive captain during this span.

Now set to return to action for the first time since Week 9, we’re intrigued to see how the Penn State product performs. Should he struggle over the final two games and into the postseason, Dallas might move on from him altogether. The cash-strapped Cowboys can save $7 million against the 2019 cap by releasing Lee. 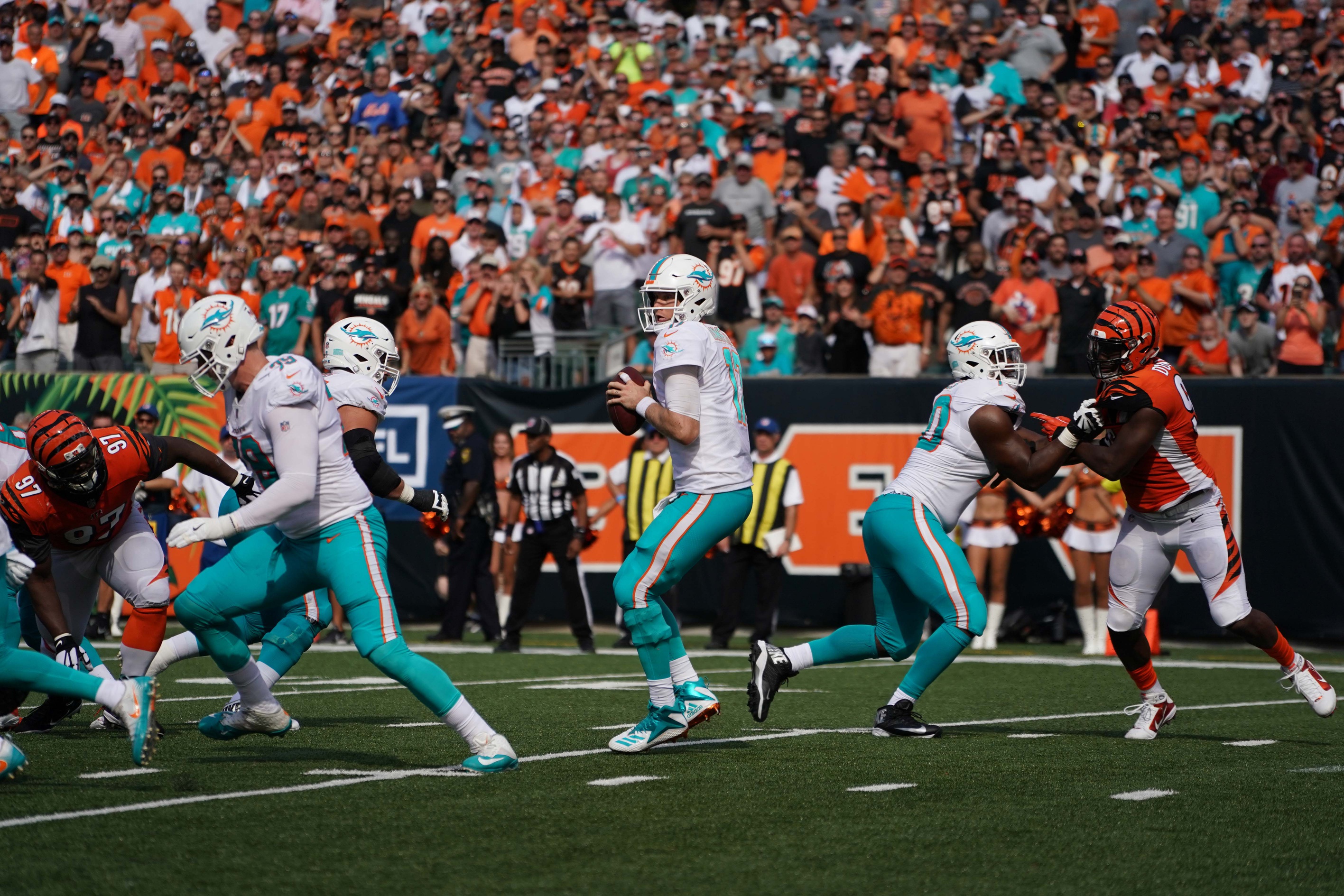 We focused on Tannehill as a quarterback potentially set to move on to a new city next season. Depending on how the final two games of the 2018 campaign play out, that’s a real possibility. The former first-round pick has suited up in a grand total of nine games since December of 2016. He’s currently dealing with injuries to both the shoulder and ankle.

As committed as the Dolphins have been to Tannehill in recent seasons, it might be time to move on from him. That would include the Dolphins saving north of $13 million against the 2019 cap by releasing Tannehill next offseason.