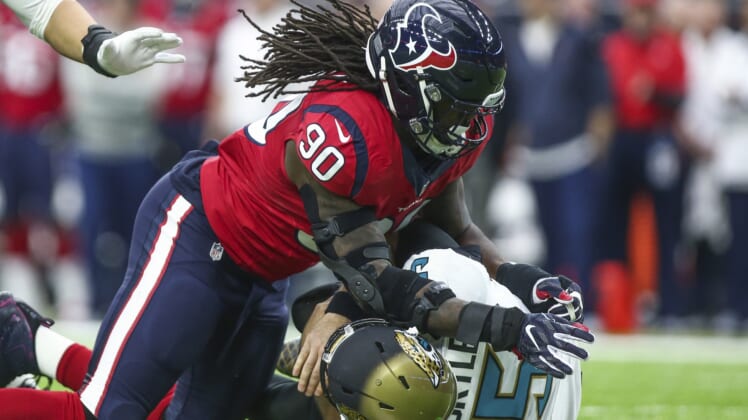 With the salary cap on the rise every year, NFL free agents are raking in more cash than ever before. This year’s class features some top talent set to break the bank.

One quarterback is sure to rake in a boatload of cash. A couple of pass rushers should, too, and you can bet one particular running back will finally sign a massive deal.

These are the 10 free agents most likely to sign huge contracts this spring, loaded with a ton of guaranteed cash.

The Philadelphia Eagles are still pondering a scenario where they tag Foles and try to trade him. If that happens, at the worst he’s going to haul in a fully-guaranteed one-year, $25 million-plus deal. At best, he’ll sign a deal worth at least as much per year in free agency. Whether Foles is worth that kind of money is debatable. His postseason heroics the past couple of seasons, and the fact that the quarterback market is weak this year — both in free agency and the draft — makes him a valuable commodity, regardless.

The Atlanta Falcons are doing everything in their power to re-sign Jarrett before he hits free agency. It’s going to cost them a pretty penny, because this young lineman more than lived up to the already high expectations we had for him prior to last year. If the Falcons cannot work a deal with Jarrett, then he could make even more on the open market. Still just 25 years old, Jarrett is one of the best 4-3 defensive ends in football and is still getting better.

Speaking of young players still getting better, Clark is another player on that list. His ability to rush the passer ranks right up there with some of the best in the NFL today. The past three years, he’s racked up 32 sacks and 66 total quarterback hits, and he is coming off a career-best 13-sack 2018 campaign. The Seattle Seahawks would be loathe to let him go, and he could be tagged. Regardless, he’s set to rake in millions of guaranteed dollars.

Even coming off a season-ending injury, Thomas is going to sign quite a lucrative contract. Before his injury, he was without a doubt one of the best free safeties in the NFL. A true ball hawk, Thomas has hauled in 28 interceptions in his career and had three picks in just four games last season. Still in his prime at the age of 30, he’s not on the decline whatsoever. The Dallas Cowboys are rumored to be interested in signing him, and we already know Thomas wants to play in Arlington. Will other teams compete for his services? You bet they will.

Last season, Lawrence was all too happy to play on the franchise tag and haul in over $17 million. Essentially, due to past injuries, he was on a one-year prove-it deal with Dallas. And he proved he’s one of the best all-around defensive ends in the game. The past two seasons, Lawrence has tallied 122 tackles, 25 sacks, an interception, and six forced fumbles. Dallas is working hard to keep him in the fold, but Lawrence would be smart to wait until he hits free agency to see if he can either pressure the Cowboys to up their offer or take more from another team.

It’s hard to see the Kansas City Chiefs letting Ford go. He’s coming off a career year in which he tallied 13 sacks and seven forced fumbles during the regular season. He’ll almost certainly be slapped with the franchise tag this year (multiple reports on this), as the Chiefs try and hammer out a long-term deal before the deadline later this year. Regardless, Ford is about to get paid with a capital P.

One of the most versatile all-around defensive ends in the league, Flowers has played himself into a lucrative long-term deal. His pass-rushing stats don’t scream “elite” — just 21 sacks the past three years. However this is a player many teams will covet due to his ability to play in any scheme, all over the line. This is just my opinion, but Flowers is likely to leave New England unless he takes less to stay.

Based on what happened in New York’s locker room recently, Collins clearly does not expect to be back with the Giants next season. In terms of what Collins brings to the table, he’s not the same type of safety as Thomas. He isn’t as good on the deep back end. Instead, he’s more of an in-the-box safety who is awesome at blitzing, making tackles in the run game and using his instincts to make plays in coverage. Still just 25, he’ll receive plenty of interest and should sign a huge long-term contract.

Like Ford in Kansas City, it’s hard to envision the Houston Texans letting Clowney hit free agency. He’ll almost certainly receive the franchise tag, though the team reportedly would rather do a long-term deal with him this spring. Though injuries derailed Clowney’s early career, he’s since lived up to being the No. 1 overall pick in 2014. The past three seasons have seen him rack up 24.5 sacks, but he does so much more than just bring pressure off the edge. Clowney is the entire package and can excel in either a 3-4 or 4-3 scheme.

There may not be a happier player in the NFL right now, because the Pittsburgh Steelers have finally set him free. Still very much in his prime, and having spent the entire 2018 season resting his body, Bell is going to set a new market for running backs this spring. There are a number of teams with deep pockets and potentially the desire to give him a massive, front-loaded contract with huge guarantees. He’s the big fish on offense this year, and he’ll have plenty of lures to choose from.