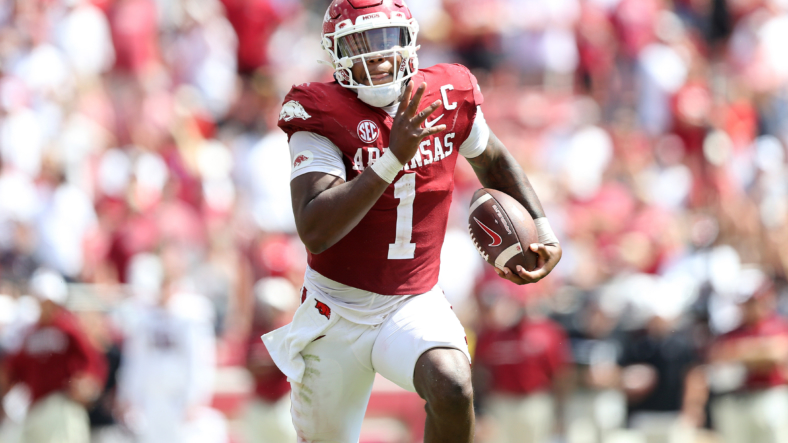 The NCAA football season continues on Thursday in Week 4, only serving as a preview to a weekend full of the best future NFL Draft prospects who will soon be playing on Sundays in the NFL.

While the 2023 NFL Draft is still seven months away, scouts are putting in the work right now to try and determine which players may be able to help their organizations in the next few seasons. Since scouting the next crop of top NFL Draft prospects never ceases, we figured we’d add to the pile.

Down below we focus on 10 NFL Draft prospects who are likely to make it to the next level in the next year or two. For those interested in getting a sneak peek at which top college football prospects are headed to the NFL, find out which games you should be tuning into this CFB weekend.

NFL talent evaluators seeking a quarterback prospect who has it all, from the size (6-foot-4), a strong arm, plus mobility, sound mechanics, and smart decision-making, should look no further than Tennessee’s Hendon Hooker. He’s the complete package. Even playing in the uber-competitive SEC, Hooker’s career has taken off since transferring from Virginia Tech in the ACC. He’s thrown 36 touchdowns compared to just three interceptions since 2021.

Another highly-touted upcoming quarterback prospect is Arkansas’ K.J. Jefferson. In comparison to Hooker, Jefferson uses his legs a lot more often yet still possesses a strong arm that can do damage downfield. Jefferson also has ideal size (6-foot-3) and loves to use it by running full-steam ahead, taking on defenders in the open field. He’s a delight to watch.

Thankfully we have another fascinating matchup, with Jefferson taking on the Aggies, who rank tenth in the nation in points allowed per game. When it comes to stopping the pass, they rank 22nd. It’s a great test for Jefferson, who is much better throwing from a set platform as opposed to being on the move. He may not be a first, second, or even third-round prospect right now, but Jefferson showing growth with his ball placement and accuracy could boost his draft stock.

Despite playing for the Oklahoma Sooners, many still don’t know the name of their starting running back, Eric Gray. Previously in a timeshare role, now Gray’s touches have skyrocketed, and so has his yards per carry, soaring from 5.3 yards to 7.7 yards per tote.

The compact, sturdy runner has a knack for making defenders miss in the open field, and his cutting ability is out of this world. While he may not have entered the season atop anyone’s future NFL RB ranks, Gray is ascending rapidly. He should be able to continue making college defenses look silly for the rest of his senior season at OU.

Benefiting from being able to catch passes from one of the nation’s top quarterbacks in Drake Maye, Josh Downs is who many would call the best player on the Tar Heels. Unfortunately, the 5-foot-10 receiver wasn’t able to play in either of their past two games as he recovers from a knee injury. Downs should be on track to return to the lineup vs Notre Dame. If so, he’ll be matched up against a Fighting Irish defense that should only continue to improve.

Transfer safety Brandon Joseph is one of the top players at his position in the nation and should see a few opportunities to cover Downs. Yet, Downs, who has great long-range speed, should be able to take the top of this defense on more than one occasion. Not only that, Downs plays much bigger than his size, and his ability to not only track the football but also jump on his pogo stick to go get it makes him one of the top wide receiver prospects in the nation.

It’s true. We rarely have our eyes on offensive linemen for the entirety of any football game. But Ricky Stromberg of Arkansas is worth paying attention to. One of the top center prospects in college football, Stromberg is sure to be playing on Sundays in the near future.

This matchup will be interesting, as Texas A&M boasts one of college football’s best defenses. Yet, Stromberg is a player with a high level of IQ in the trenches, showing the capability to pick up blockers with ease but also work his way downfield to take out the second or even third level of defenders to pave the way for either KJ Jefferson or Raheim ‘Rocket’ Sanders. At 6-foot-4, Stromberg may not stick at center in the NFL, but his size could still play nicely as a guard. Either way, he’s a bully built for the trenches.

If he takes the field, Bryan Bresee will be playing with a heavy heart after his younger sister passed away after fighting brain cancer. Bresee missed last week’s contest against Louisiana Tech, but is set to return for this matchup against Wake Forest. In doing so, he’ll get a chance to chase quarterback Sam Hartman out of the pocket.

Bresee only got to play in four games after tearing his ACL a season ago, so he’ll have even more fire to put into the pit against the Demon Deacons. Bresee is already viewed as a likely first-round selection, possibly even a candidate to go within the top 10 picks. He moves around the defensive interior, leaving a scene of wreckage behind, as he bursts through the line with ease. Bresee is a force for any team to deal with, expect to hear his name a lot on Saturday.

For those who had a chance to watch Notre Dame last season, the name Isaiah Foskey needs no introduction. For those looking for a refresher, Foskey tallied 10 sacks and 9.5 tackles for loss rushing off the edge for the Fighting Irish as a junior. Now he’s back, and creating more terror for his opponents. Foskey already has three TFLs and 2.5 sacks in just three games in 2022 and is showing why he’s among the best pass-rushers in the nation.

We’ll have fun getting to see Foskey chase after Drake Maye, who’s been one of the most prolific passers in the nation thus far, meaning the 6-foot-4 defender should receive plenty of chances to add to his sack total. Marcus Freeman uses the future first-round prospect in a number of ways, but he’s always putting fear in the opposing quarterback.

As one of the leaders playing within one of the toughest defenses in CFB, Wisconsin linebacker Nick Herbig became an immediate starter as a true freshman and has never looked back. More of a pass-rusher than a coverage linebacker, Herbig is a fundamentally sound tackler. As a sophomore, Herbig graded higher than both J.J. Watt and T.J. Watt as pass-rushers according to Pro Football Focus.

While he likely profiles as a 3-4 OLB, Herbig does occasionally drop into coverage, and he doesn’t appear lost, but his athleticism limits him to backs in the flat or covering tight ends in short areas of the field. You won’t find him covering receivers, but you also don’t want him to. Herbig should be chasing quarterbacks, which is what he’ll be doing when visiting C.J. Stroud and Co.

You can’t have an NFL Draft prospects list without including at least one member of the Alabama Crimson Tide. This week, we’re focusing on cornerback Eli Ricks. His opponent, the Vanderbilt Commodores have been scoring a lot of points, but that won’t be the theme this week, taking on Nick Saban.

Ricks was on a lot of preseason watch lists after previously being a freshman All-American during his days at LSU, but he’s since found himself battling for first-team reps on a tough defense to crack. Yet, Ricks also battled injuries early in the season and may be primed for a bigger role in the near future. With Alabama expected to roll over Vandy, expect to see Ricks out there at some point, but regaining his status as a likely top-10 pick may be much more difficult.

As mentioned earlier, the Texas A&M defense is one of the best in the nation. 6-foot-3 junior defensive back Antonio Johnson is a big reason why. A versatile defender who can play corner or safety, Johnson’s athleticism is much better than you’d expect from a player of his large stature. He can change directions with ease, allowing him to play any coverage position on the field, including the slot.

Johnson also has great ball skills and quick feet that allow him to stay with even the game’s best athletes. While he’s not the fastest on the field, Johnson makes up for it with his ability. One area he could continue to grow is his willingness to stick his nose in the pile and make tough tackles. If it’s him vs KJ Jefferson, don’t expect the defensive back to be the winner on Saturday night.