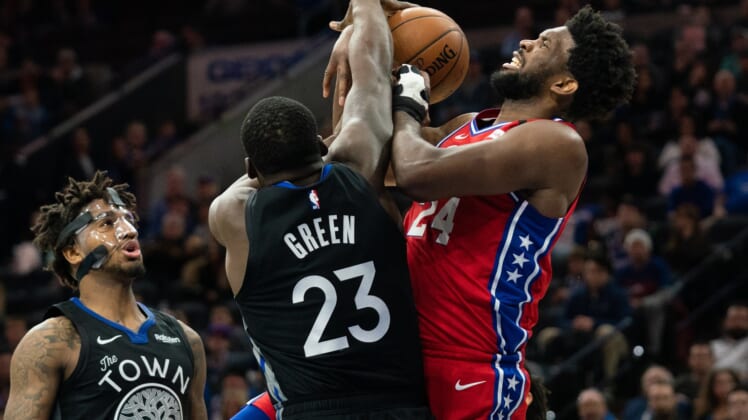 Once the 2019-20 NBA season finally concludes in October, there’s going to be a mad rush of teams looking to sign star free agents and trade some of their own high-priced veterans.

Given that the offseason will be truncated before the 2020-21 campaign starts in December, moves are going to come at a near never-ending clip.

From an All-Star guard in San Antonio to an embattled big man in Philadelphia, multiple big-name players will likely change cities once the 2019-20 season concludes. Here, I look at 10 of the biggest names likely to move on to other teams.

The 30-year-old DeRozan has a player option of $27.8 million for next season. Given that the free-agent market in October is expected to be barren, the belief is that DeRozan will indeed exercise said option in order to get one final long-term deal. A four-time All-Star, DeRozan is averaging 22.2 points, 5.6 rebounds and 5.6 assists on 53% shooting from the field this season. San Antonio is likely heading into a complete rebuild, so the veteran wing moving on to another team makes the most sense.

It’s almost a foregone conclusion that Cleveland will trade Love this coming fall. He’s made it known he wants out of dodge with the team in the midst of a complete rebuild. At 31 years old, it’s not a secret that the veteran would like to play for a contender. And despite his recent injury issues, Love’s $32.26 million salary for the 2020-21 campaign could be attractive in a salary-matching scenario. He averaged 17.6 points and 9.8 rebounds on 37% shooting from distance this past season. That type of shooting from a big man is valuable.

Denver has a rising star in power forward Michael Porter Jr. He’s expected to start moving forward in a frontcourt that includes All-Star center Nikola Jokic. What exactly does this mean for Millsap? Barring some type of heroics in Orlando once the season resumes, he will be looking for another team in free agency. Don’t expect the 35-year-old big man to break the bank on a long-term deal. Though, he’s still a capable three-point shooter from the stretch-four position. That is valuable in today’s NBA. Look for the four-time All-Star to latch on with another contender.

No sane individual expected Oklahoma City to compete for a playoff spot after it traded Paul George and Russell Westbrook last summer. Heck, Paul figured to be in OKC for a short period of time before being flipped. Things have changed big time. The Thunder head to Orlando with a 40-24 record and as the fifth seed in the Western Conference. Despite this, Paul’s future with the team remains very much up in the air. Oklahoma City is still looking to build for the future. And based on the future Hall of Famer’s stellar performance this season, he will draw interest on the trade block.

The Detroit Pistons’ decision to trade Drummond for pennies on the dollar back in February was somewhat of a shock. The All-Star center has a $25.4 million option for next season, which means he’s going to hit free agency. There’s legitimately no reason to believe Cleveland will even look to retain him. If not, the market for this big man’s services will be plentiful. Drummond, 26, finished the 2019-20 campaign averaging a career-best 17.7 points to go with an NBA-high 15.2 rebounds. He will be in high demand during a free-agent period that lacks a ton of true star power.

New Orleans engaged in trade talks with other teams surrounding Holiday in the lead up to February’s deadline. Nothing came to fruition on that end. But make no mistake about it, Lonzo Ball is seen as the point guard of the future for the Pelicans. He made sweet music with stud rookie Zion Williamson prior to the season being suspended. If Holiday is once again put on the trade block, there’s going to be a nice market for his services. The 30-year-old former All-Star is among the most underrated players in the game. He’s averaging 19.6 points and 6.9 assists on a robust 45% shooting from the field this season.

Another underrated player, this former Houston Rockets second-round pick will benefit big time from a watered-down free-agent market. At just 26 years old, Harrell has morphed into an efficient scorer for the Clippers. He’s averaging nearly 19 points and 7.1 rebounds on a ridiculous 58% shooting from the field. The former Louisville standout can also guard multiple positions on the other end of the court. Look for a huge contract offer to come Harrell’s way this fall, one that the cash-strapped Clippers won’t be able to match.

Detroit simply needs to blow this entire Griffin experiment up. Former head coach and front office lead Stan Van Gundy went for the home run when he acquired Griffin from the Clippers during the 2017-18 season. It’s backfired big time since. The six-time All-Star has dealt with multiple injuries over the seasons and is owed a whopping $36.8 million for the 2020-21 campaign. Detroit will have to add a young player and draft pick compensation to move Griffin. But at this point, the team can’t start anew with a rebuild until it rids itself of this massive contract.

Rumors out of Northern California continue to suggest that Golden State might very well look to trade Green in October. The emergence of 2019 second-round pick Eric Paschall, coupled with surprising interest in Green, magnifies this even further. Sure Green acted as a rock for the Warriors during their half-decade of dominance. But everything comes to an end. It just makes too much sense for Golden State. If Steve Kerr and Co. can get a first-round pick and a rotational player in return for the embattled three-time champion, the Warriors must pull the trigger. Meanwhile, Green is an attractive option for other contending teams given his passing ability and prowess on defense.

A lot of this will depend on how the previously struggling Sixers perform once the NBA season resumes in Orlando. Embiid got into multiple spats with fans in Philadelphia prior to the campaign being suspended. The 76ers themselves struggled to maintain any sense of consistency with Embiid and Ben Simmons leading the charge. This seems to indicate that general manager Elton Brand could look to break up the star duo. If so, Embiid makes more sense than Simmons. He remains injury prone. He’s a divisive personality. But the talent has certainly been on display for Philadelphia to get a whole lot for the All-Star center in a trade.