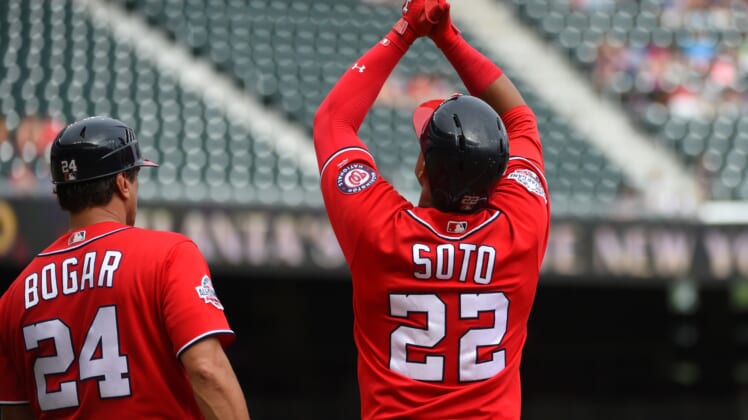 We saw Mookie Betts and Christian Yelich win the MVP in their respective leagues in 2018. And while both were very well known in MLB circles, neither would have been called an MVP “favorite” heading into the season.

A handful of other MLB stars are ready to make that leap in 2019. One of them shares an outfield with Betts. Two others made a huge impression on the National League last season as rookies and stand on the brink of absolute superstardom. Another Houston Astros star has been knocking on the door for a while, but has been held back by injuries in recent years.

These players have all reached great levels of success in MLB. But as we look ahead to the 2019 season, all are ready to become MVP candidates.

While understandably somewhat overshadowed by the likes of Betts and J.D. Martinez in 2018, Benintendi was a key cog in Boston’s lineup. He hit .290/.366/.465 with 16 home runs and 41 doubles. He also stole 21 bases and scored 103 runs. That’s pretty good for someone who, at 24, is really only entering his prime. Additionally, we must remember that two years ago, Benintendi was arguably baseball’s best prospect. Hitting in one of baseball’s best lineups, 2019 represents a golden opportunity for Benintendi to bring his game to the next level. We expect him to do that.

From the always challenging catcher position, Realmuto hit .277/.340/.484 with 21 home runs a season ago. He did that despite hitting in the spacious Marlins Park. More impressively, he put up those numbers despite batting in a lineup that, without him, was essentially Minor League caliber. The situation in Philly could not be more different. He’s going to have ample protection in the lineup while hitting at a tremendous hitter’s park (where he has great career numbers, no less). The fact that Realmuto is a catcher will only help his cause. That makes him a viable MVP threat.

Torres entered 2018 hyped as one of baseball’s top rookies. He didn’t disappoint. Torres had quite a rookie year for himself in 2018, hitting .271/.340/.480 with 24 home runs in only 123 games. When someone with that kind of talent has a rookie season like that, it makes us awfully excited about what will happen in Year 2. Torres couldn’t be in a much better situation, either. The Yankees set the MLB record for home runs a season ago and don’t figure to slow down. That’s going to give him ample opportunities to put up some big numbers this season.

In 2018, Soto did things that we had rarely (if ever) seen from a player his age. Now it’s time to see what Year 2 will offer. There’s plenty of reason to be upbeat. Soto was one of MLB’s best, most well-rounded players a season ago. And he was only 19. Better yet, before 2018, he had never even played beyond A-Ball. Heck, he played only eight games in AA last season before getting called to the majors. That’s pretty green and it never even remotely showed. Now he’s more acclimated to the Major League game and even more comfortable. Watch out for this guy in 2019.

We were high on Correa’s MVP chances heading into 2018. Unfortunately, the injury bug bit Houston’s shortstop hard and he had a subpar season. But that’s in the past. Correa is still one of baseball’s most talented players. He also plays on one of the league’s best teams. His candidacy will also be buoyed by playing shortstop, one of the game’s most demanding positions. The big issue for Correa over the last two seasons has been his health. That’s enough to be concerned about. But if Correa can get to about 140 games (or more), we’d be surprised if he wasn’t an MVP contender at season’s end.

Suarez finished 18th in NL MVP voting a season ago and probably would have finished higher were it not for two things. One, an early season injury cost him some games. Two, he played for a last place team. He’s healthy now and the Reds actually project fairly well in 2019. This is a man who’s hit .271/.367/.493 with 60 home runs over the last two seasons and hit .283/.366/.526 with 34 homers last year. If he’s anywhere near that pace again this season for a vastly improved Cincinnati team, Suarez will get the praise he deserves and be firmly in the MVP talks at the end of the year.

We’re bullish on the White Sox this year. Part of that is the influx of young talent, led by Eloy Jimenez. But Abreu is also a big part of that, as well. This is a man who’s only finished in the top-10 of MVP voting once, doing so as a rookie. But his average MLB season has been .295/.353/.516 with 29 home runs and 98 RBI. If Chicago was a better team in that time, his MVP consideration would have been much better in the past. Abreu missed some time last season and had something of a down year. But in a contract year and playing for a team that should be much better, expect a big season.

Before the 2018 All-Star break, including Conforto as a possible MVP candidate for 2019 would have seemed nuts. But he turned a corner in the second half, hitting .273/.356/.539 with 17 home runs in 68 games in the second half. And really, the home runs really stick out. Over the course of 150 games, that’s a pace of roughly 38 homers. And it’s not like that’s a totally unrealistic possibility. While the Mets may not seem like one of baseball’s best lineups, they’re much improved from last season. Conforto might feel like a dark horse. But that power is definitely MVP caliber.

Chapman had a nice season at the plate in 2018, hitting .278/.356/.508 with 24 home runs. That kind of production mixed with his incredible defense was enough to get him seventh in AL MVP voting. But in the second half, he hit .309/.371/.591 with 14 homers in 267 at-bats. If he mixes that home run pace (roughly 33), Chapman will be even more viable as an MVP candidate. If he does that with the second half slash line (along with his sterling glove), then he’ll be in the discussion with the likes of Betts and Mike Trout at the end of the season.

Acuna sparked the Atlanta lineup in 2018. He hit .293/.366/.552 with 26 home runs and 16 stolen bases en route to winning the NL Rookie of the Year Award. And he did all of that at the ripe old age of 20. Like Soto and Torres, this didn’t come out of nowhere. Acuna’s brilliant play was expected and he certainly delivered. There’s every reason to believe that Year 2 will offer bigger and better things. Acuna and Soto competed for the NL Rookie of the Year throughout the 2018 season. We’d expect to see them battle it out for the MVP in 2019 — and for several seasons going forward.