10-man NYCFC hold on for draw with FC Cincinnati 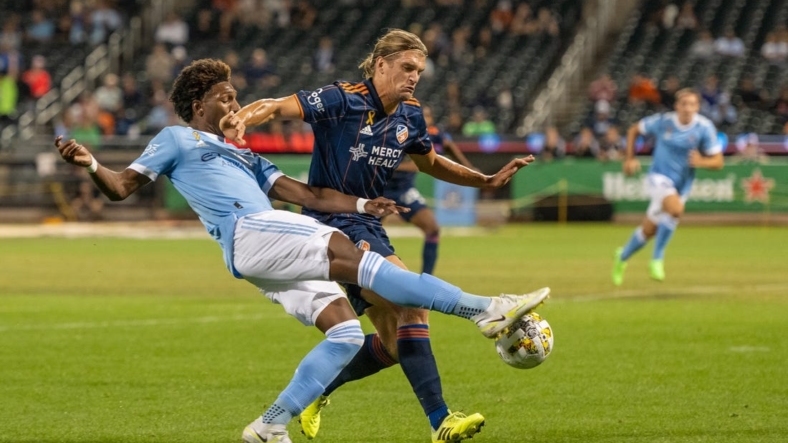 Gabriel Pereira headed in the tying goal late in the first half to help New York City FC notch a 1-1 tie with visiting FC Cincinnati on Wednesday night.

FC Cincinnati were outshot 22-4 but managed to increase their unbeaten streak to eight games (2-0-6).

NYCFC improved to 6-0-2 all-time against Cincinnati. Both ties came this season.

Thiago Martins had a rough night for NYCFC.

Martins scored the own goal in the first half to give Cincinnati the lead. Later, he took down Sergio Santos and drew a red card for denial of an obvious goal scoring opportunity in the 76th minute, leaving NYCFC a man down for the rest of the match.

Alvaro Barreal took the ensuing free kick in the 80th minute from just outside the box, and his left-footer was stopped by NYCFC goalkeeper Sean Johnson. That was Cincinnati’s lone shot on goal and Johnson’s lone save.

Cincinnati moved ahead in the 22nd minute when Martins made a bad mistake. He was about 25 yards away from his own net when he suddenly sent the ball back toward the goal despite Johnson being nowhere in the vicinity. The miscue put the home team in a hole.

NYCFC nearly tied the score two minutes later but Celentano made a great hand save of Talles Magno’s close-range header.

New York City knotted the score in the 41st minute when Tayvon Gray sent a cross in front of the net and Pereira headed it in for his seventh goal of the season.

NYCFC had a dominating 17-1 edge in first-half shots and placed eight shots on target.

Cincinnati tightened up its defense in the second half, keeping NYCFC in check.

NYCFC’s top second-half opportunity came in the 72nd minute when Heber unleashed a left-footed blast from beyond the box that hit the crossbar.