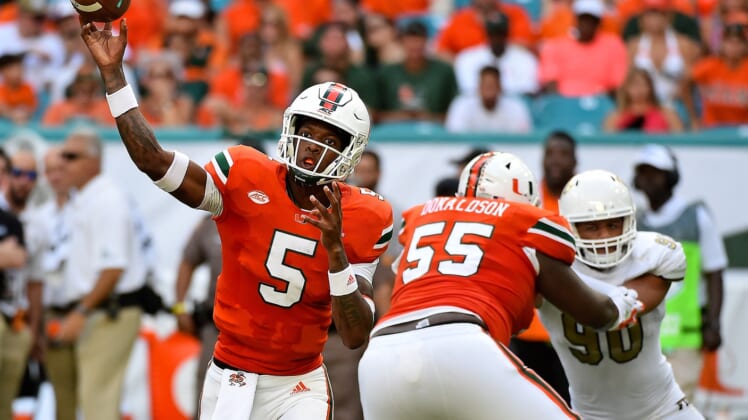 College football teams try not to rely heavily on freshmen, but some talented youngsters simply demand a leading role on the depth chart.

There’s no greater evidence in the 2018 season than at Clemson. In only four appearances, Trevor Lawrence unseated a quarterback in Kelly Bryant who led the Tigers to the College Football Playoff last season.

All over the country, there are freshmen — both true and redshirt — asserting themselves as key contributors. Most are excelling on the stat sheet, too.

Although a few other players aren’t as productive right now, they’re already holding a significant role at a brand-name school. At this point of their career, winning a high-profile competition to earn a starting job is also worthy of “phenom” status.

Entering the season, Alan Bowman was completely absent from national outlooks. Not only is he a true freshman, Bowman opened the campaign as the second-stringer. However, an ankle injury to McLane Carter thrust the young backup behind center, and he’s merely the nation’s leading passer through four weeks. Bowman is averaging 389.3 yards thanks to a 605-yard explosion in the Red Raiders’ victory over Houston. Overall, he’s posted a 72.1 completion percentage with 10 touchdowns and two interceptions while leading Texas Tech to 3-1.

Despite a disappointing 2-2 start to the year, JT Daniels has flashed all the skills that made him a coveted prospect. During his USC debut, the gunslinger led the Trojans to 43 points. He struggled in losses on the road to Stanford and Texas but bounced back quickly to help USC record an important Pac-12 victory. Daniels posted 241 yards and three touchdowns as the Trojans edged Washington State 39-36. Growing pains always happen with freshmen quarterbacks — particularly if he should be a high school senior, like Daniels — but USC’s future is clearly promising.

Pressure? What pressure? The top-rated quarterback in the 2018 recruiting class, Trevor Lawrence needed only four games to show he deserves the starting job at Clemson. As a result, incumbent first-stringer Kelly Bryant decided to transfer from the program. Although the Tigers are now precariously thin at the position, Lawrence has All-American talent when healthy. He’s already gathered 600 yards and 10 touchdowns to just two interceptions. Now that Lawrence will no longer be splitting snaps, his counting stats are destined to skyrocket.

Once committed to Texas, Rondale Moore pulled a late switch and signed with Purdue. What a steal he’s been for the Boilermakers. The speedster has consistently produced at receiver, reaching the 100-yard plateau three times. Additionally, Moore has registered 132 rushing yards and 228 total yards as a returner. In four appearances, he’s crossed the goal line five times and set a single-game program mark for all-purpose yards. At this pace, Moore will break Purdue’s career record in that category midway through his sophomore year. Not bad, right?

No matter how Mark Richt handles this quarterback dilemma in 2018, it’s clear N’Kosi Perry is the best option for Miami. After taking a redshirt last year, he’s wasted little time impressing. The ‘Canes turned to the dual-threat quarterback when Malik Rosier struggled early opposite Florida International, and Perry provided a major spark. He collected 256 yards of total offense with three touchdowns. Then against UNC, he played a mistake-free first half as Miami built a 20-point lead. Thanks to his mobility and elite arm strength, Perry is ready to take over a rising program.

The versatile defender known as “Bookie” has lived up to expectations. A prized recruit from powerhouse IMG Academy, Brendan Radley-Hiles made five tackles in his college debut. Two weeks later, he recorded eight takedowns with one in the backfield at Iowa State. Radley-Hiles, who has opened each of Oklahoma’s first four games as the nickelback, also has two pass breakups. The Sooners aren’t known for developing elite talent on defense, but Radley-Hiles’ performance has suggested he’ll become a feared playmaker for Oklahoma.

The third brother of his family to earn a Football Bowl Subdivision scholarship, Amon-Ra St. Brown has immediately stood out at USC. While it surely helps he played alongside Daniels in high school, St. Brown has secured 20 passes for 342 yards and two touchdowns this season. The talented wideout’s debut ended with 98 yards and a score. Two weeks later, St. Brown amassed a current career-high mark of 167 yards. His development is far from finished, but St. Brown will be an even greater threat as Daniels gets more comfortable running the USC offense.

Playmaker, thy name is Caden Sterns. “Magnificent” adequately describes the safety’s performance to date, considering his impact opposite USC and TCU. Sterns blocked a field goal that the Longhorns returned for a touchdown against the Trojans and picked off two passes in Week 4. To receive those game-shaping moments from a freshman is special. For good measure, he notched four tackles — and another interception — during the first two contests of the season. Sterns has the look of an All-American safety by the time his Texas career ends.

When the Bruins have the personnel to match Chip Kelly’s offense, Dorian Thompson-Robinson should be a household name. Meanwhile, in three losses, UCLA’s blocking unit has simply been a disaster. The line has ceded 23 tackles in the backfield, including 12 sacks. Thompson-Robinson rarely has time to throw, yet the eye test looks exceptionally more promising than the box score. His arm strength, touch and accuracy are all high-quality traits. Get familiar with Thompson-Robinson, because his development track is heading toward stardom.

Pooka Williams Jr. didn’t play in the season-opening loss to Nicholls, but he spearheaded the Kansas offense during its two victories. The freshman shredded Central Michigan for 125 yards and two scores, helping the Jayhawks end a nine-year road losing streak. The next week, Williams diced a Rutgers defense for 163 yards and another touchdown. Heading into Week 5, he boasts the sixth-highest rushing average in the nation. Kansas remains an overall disaster, but at least Williams gives Jayhawks supporters a legitimate reason to watch a bad team.