10 most dangerous players heading into the NBA Playoffs

Role players sure do find a way to make an impact when the NBA Playoffs come calling. Last season alone, a bench player for the Golden State Warriors earned the Finals MVP.

That said, postseason contests around the Association are primarily about star players. Who can take over a game in a heartbeat? Who steps up the most when his team needs it? Who will pull the next Michael Jordan?

These are questions that are asked every year. And like clockwork, they are answered every June.

Here are the 10 most dangerous players heading into the playoffs. You will see a combination of former champions and MVP’s as well as a couple role players with significant impacts on how their respective teams perform.

From reigning NBA MVP Stephen Curry to Paul George in Indiana, here’s a look at those who will dominate the landscape of the NBA Playoffs. 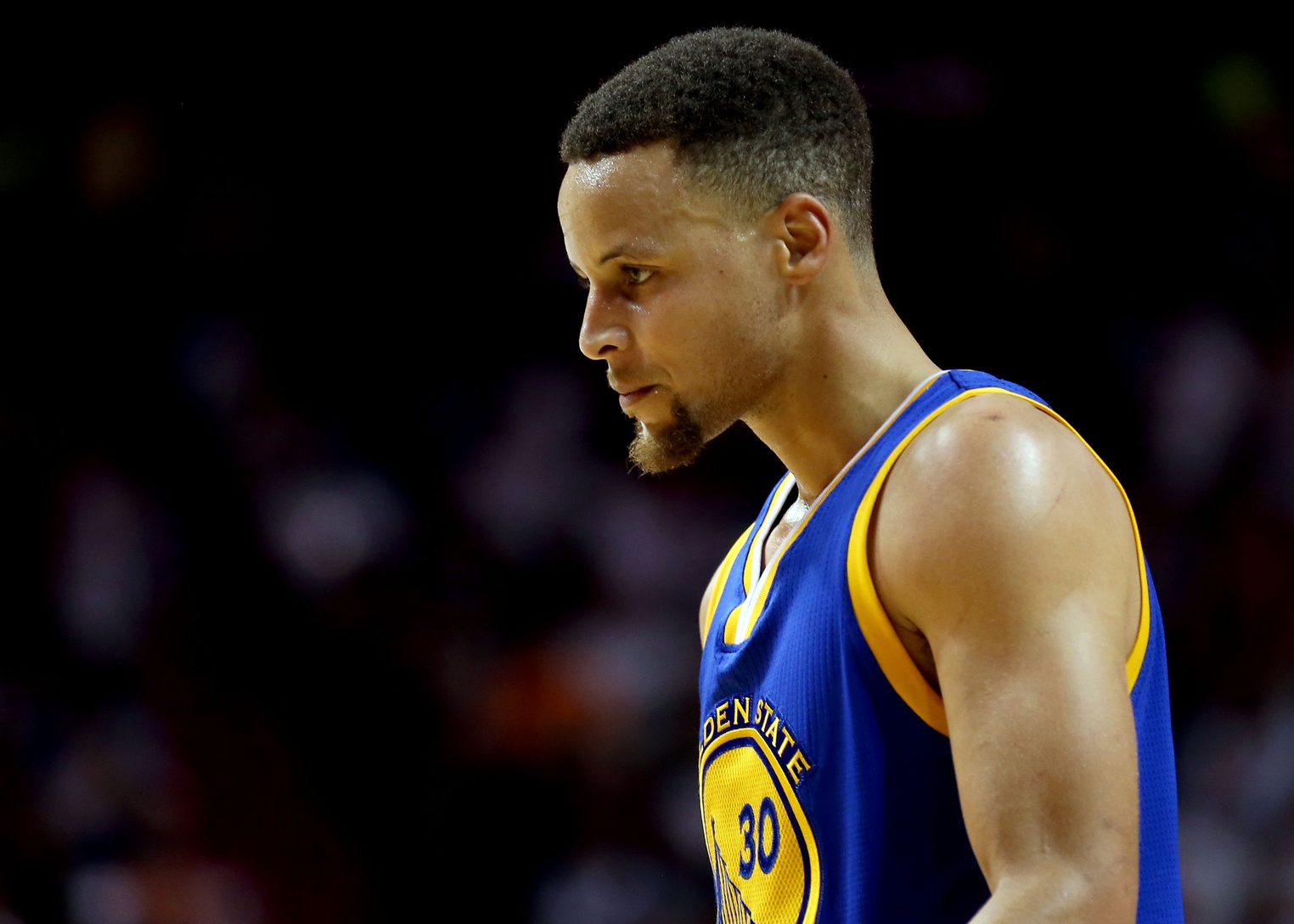 When Curry has it going, there’s not a player in NBA history that can keep up with him from a pure scoring standpoint. He’s connected on nine-plus three-pointers six times this season. When he goes all unconscious, the Warriors are simply unbeatable.

Let’s Look at Sunday’s win against the Portland Trail Blazers as an example here. Aided a great deal by Curry’s stealth-like shooting, Golden State put up a season-high 136 points. It shot 57 percent from the field, 60 percent from three-point range and 82 percent from the free-throw line.

No team is going to beat the defending champs when they put up that type of display on offense.

This is where Curry comes into play. Including Sunday’s 39-point outing, the Warriors boast a 51-4 record over the past two seasons when Curry puts up 30-plus points. He’s averaging over 30 points per game this season. You can do the math from there.

If James plays up to the level we have seen in the postseason over the past several years, he will be making an unprecedented sixth consecutive trip to the NBA Finals. We can talk about James’ supporting cast all we want.

However, it’s all going to be on James’ shoulders much like it was during last year’s run to the NBA Finals. Sure Kyrie Irving and Kevin Love are healthy. Sure the team has a deeper bench. Again, that’s fine and dandy.

As we have seen throughout his near two seasons in Cleveland, James is the sole x-factor here.

Cleveland boasts a 4-13 record when James doesn’t suit up since the start of last year. It’s 104-38 when he actually plays during that very same span. That’s what you call MVP caliber right there. 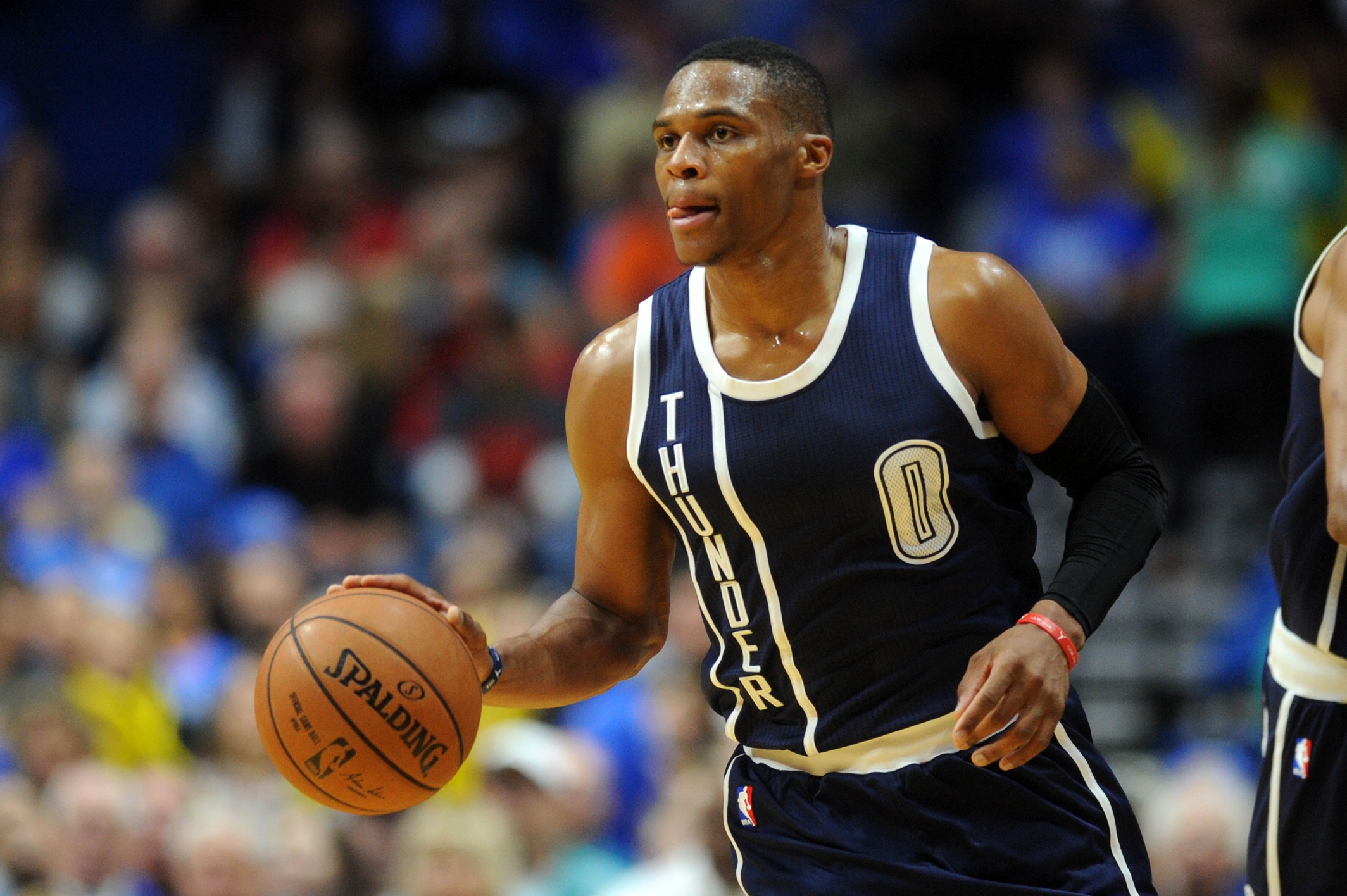 When Westbrook provides the Thunder with a triple-double, they have been unbeatable (literally). They boast a 17-0 record in said games this season.

While this could pretty much be said for any team when a player puts up such ridiculous numbers, it’s important to know just how prevalent triple-doubles have been for Westbrook this season. After all, he’s accomplished that feat in 21 percent of his games this season.

It’s also a mighty fine improvement from a team-wide standpoint. Dealing with a plethora of injuries last season, the Thunder were barely over .500 in the games that saw Westbrook net a triple-double.

There’s an argument that can be made here. The argument would consist of Leonard being the best two-way player in the Association. Coming off a game-winning shot against the Utah Jazz on Tuesday, Leonard is averaging 22.3 points while shooting 54 percent from the field over the past 10 games.

We already know the type of skill and energy Leonard brings on the defensive end. If he can continue to pack a consistent scoring punch, it’s going to be hard for any team in the NBA to overcome everything else the Spurs bring to the table.

Not your ordinary No. 2 scoring option, this sharpshooter can keep the Warriors in a game by his lonesome. Golden State boasts a 17-0 record when Thompson puts up 30-plus points this season.

With Thompson’s ability to put up huge point totals in a short span, he’s about as dangerous as it gets. With his defensive capabilities, he’s one of the best two-way players in the Association.

This could be key if Curry isn’t hitting his shot in a specific playoff game moving forward. Thompson has also made sure to know when to step his game up. That’s been key to the Warriors’ success over the past two seasons.

Let’s say for a second San Antonio puts Leonard on Curry. That would leave the Spurs exposed with a lesser defender on Thompson. If this “lesser” half of the Splash Brothers tandem is hitting, that would spell trouble for Gregg Popovich and Co.

Speaking of scoring in bunches, Lillard has proven himself to be one of the top scoring guards in the entire NBA. It’s not as much about consistent scoring as it is about putting up a large volume of points in a short period of time.

He’s tallied 30-plus points 16 times since the start of the calendar year. Portland boasts a 14-2 record in those 16 games. It’s just 13-13 when he doesn’t reach that plateau. This tells us a story of a team that’s clearly reliant on Lillard putting the hoop through the net.

Likely to take on Oklahoma City or the Clippers in the first round, this is going to be key for the Blazers. It also makes Lillard a dangerous force for a team that’s going to be flying under the radar heading into the postseason.

If he’s able to outscore Russell Westbrook in a potential series against the Thunder, that will be key for Portland’s hopes of pulling the upset. The same can be said against Chris Paul and the Clippers.

With the ability of Oklahoma City, Golden State and Portland to hit the outside shot on a consistent basis, the Clippers will need one player to provide a threat from beyond the arc.

That’s where a Redick comes into play. He leads the NBA with a 47 percent success rate from beyond the three-point line. The Clippers have won 17 of 22 games in which this this former Duke standout has hit four-plus threes.

In this, it’s not necessarily about Redick’s three-point percentage. It has more to do with how aggressive he is launching the ball. If he starts getting confident about being a shot-maker, then the Clippers should be in a good position. 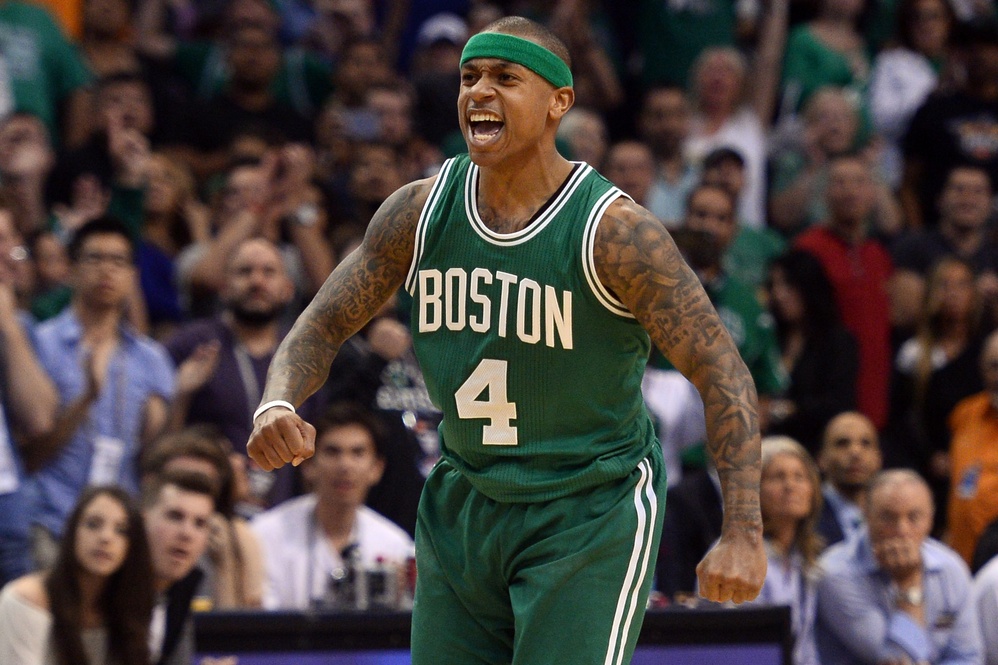 This tells us a story of a guard that can keep his team in the game when others are struggling to score. On a Celtics squad where no other player is putting up more than 15.2 points per game, this becomes paramount.

In short, Thomas will have to be the team’s primary scorer should it go deep in the playoffs. He’s proven he can do it over and over again throughout his career, which makes him a dangerous option in what could be a wide-open Eastern Conference Playoffs.

The former MVP is somewhat low on this list. This is primarily due to the fact that his teammate can take over a game in so many different ways, proving to be dominant in the process.

For Durant, the game comes more naturally. He’s never really outside of himself. This has proven to be an ingredient for success throughout their tenure in Oklahoma City.

Though, this might have to change a great deal in what promises to be one of the most talent-laden playoffs in recent memory.

We’ve seen Westbrook put up huge numbers in games the Thunder have lost. In fact, Oklahoma City is 16-11 in games that the guard has tallied 25-plus points. Comparatively, it is 31-15 when Durant goes for more than 25.

To take this one step further, the Thunder are 33-12 when Westbrook puts up 10-plus points.

Notice a trend here? This team is dominant when Westbrook is distributing like a pass-first point guard and Durant is scoring like the former MVP he is. 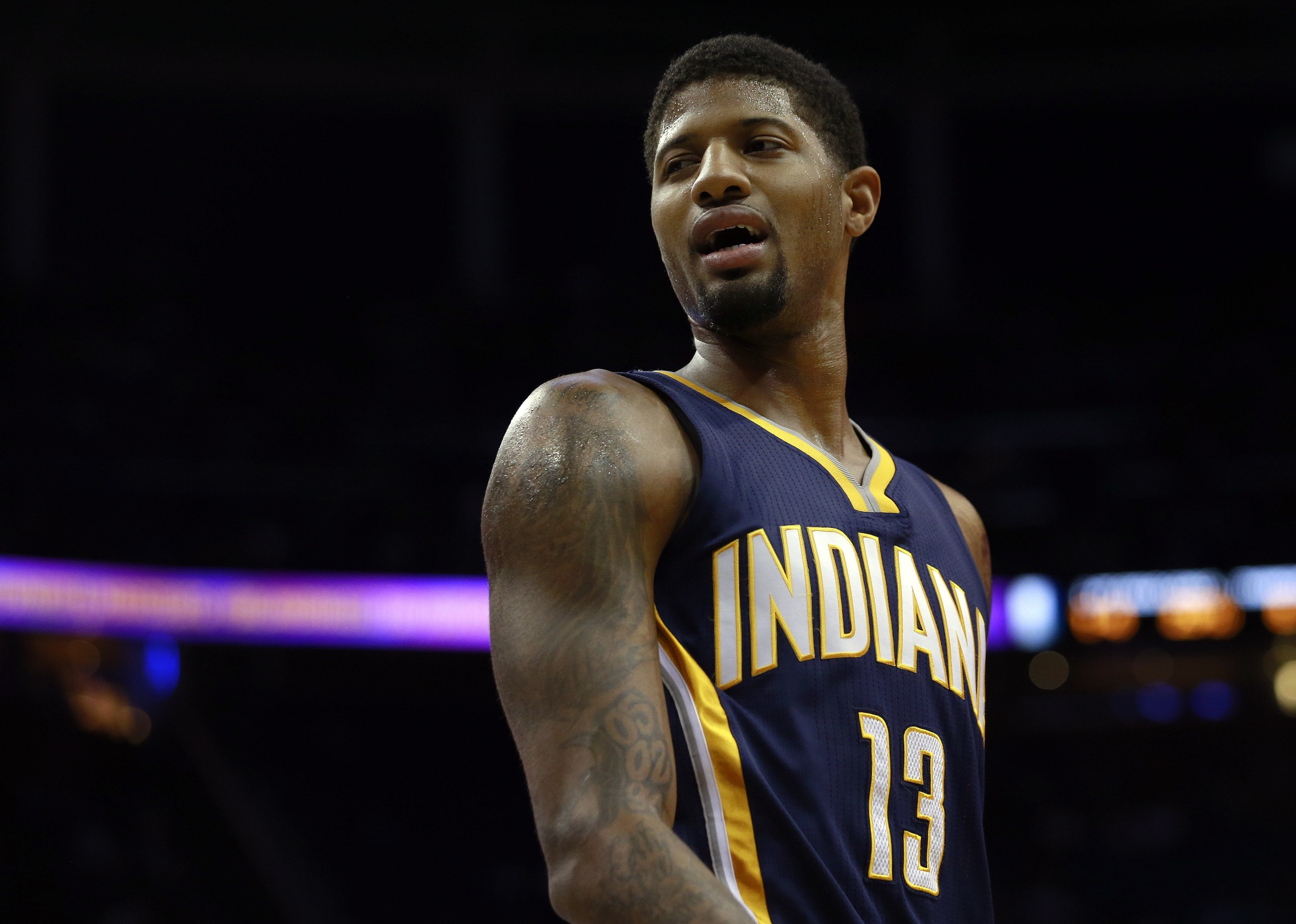 George knows perfectly well that he’s going to have to come up massive in the playoffs if the Pacers are going to advance out of Round 1.

There simply isn’t another consistent scorer on this roster, as evidenced by the fact that not a single other player is averaging more than 14 points per game. Even then, it’s taking Monta Ellis an average of 12.8 shots per game to do that.

George has proven capable of carrying this team on his back in the past. Remember, George averaged nearly 23 points per game during Indiana’s run to the Eastern Conference Finals back in 2013-14. He’s going to have to be this level of dominant for the team to make some noise later this month and into May.