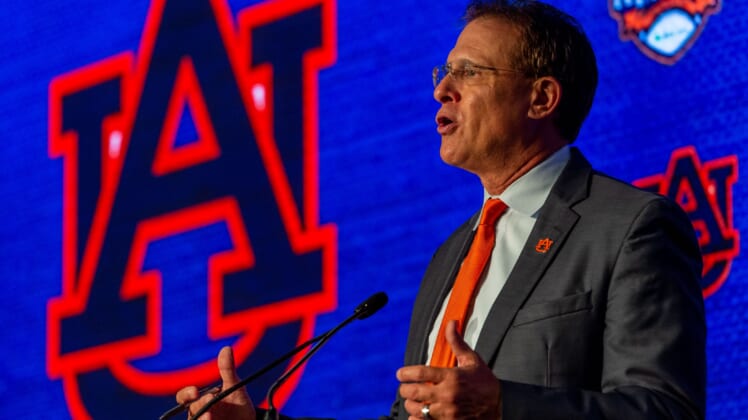 As anticipation builds across the country for the 2019 college football season, coaches are hard at work putting the finishing touches on their team before kickoff in hopes of coming out of the gates with a hot start.

Every head coach feels some pressure to start the year with a winning streak that gets the fan base, athletic department and boosters excited. It’s a weight that every coach carries, however, a select few are feeling it even more. A few losses early in the year can make all the difference in how a season is defined and even the fate of the head coach.

Here are 10 college football coaches who need hot starts to begin the 2019 season.

When a fan base raises money attempting to get its head coach fired, it’s typically a bad sign. Malzahn enters the year with a lot of people demanding change, calls that will only get louder if the Tigers are sluggish out of the gate. Unfortunately, Auburn’s early schedule doesn’t do Malzahn any favors.

Opening the season against the Oregon Ducks is already a formidable challenge that could end in a loss. It gets worse two weeks later with matchups against Texas A&M, Mississippi State and Florida. If Auburn picks up four early losses and its paired with its rough schedule to end the season, Malzahn’s fate might be sealed.

Taggart’s first season in Tallahassee was nothing short of a disaster. The program seemed to get worse under his direction. Now Taggart faces even more doubt with questions looming about this team’s chances of winning.

Florida State’s season starts against Boise State then followed by tough ACC matchups a few weeks after. Quarterback James Blackman is untested and the offensive line protecting him remains a major question mark, which adds ingredients to a potential disaster. If Taggart can’t correct the problems and the team struggles, serious doubt about his coaching abilities will increase around the program.

While Smith deserves his reputation as a developer of young men and a coach with a great beard, that’s not enough for a program with a 9-27 record in three years.

Early matchups against Akron, Connecticut and Eastern Michigan might be this team’s only realistic shots at wins. If Smith manages only two wins, the Illini likely fall short of even reaching a four-win season. It could be the nail in Smith’s time as a head coach at any level.

Sequels typically leave fans disappointed – UConn is quickly learning that the hard way. Once responsible for a run that saw the Huskies win eight-plus games each season from 2007-’10, Edsall’s return to the program has been a disaster since 2017.

UConn won four games over the past two seasons and enters 2019 with potentially one winnable game on the schedule. After Edsall’s team beats Wagner to open the season, things could go downhill quickly. It will take a hot start for the 60-year-old to remain employed after October.

South Carolina brought in Muschamp in 2016 with the hope that he could become the coach they witnessed in 2012 when the Florida Gators went 11-2. Now the program might be learning what led to Muschamp’s departure from Florida.

After a solid first season with the program, year two under Muschamp saw significant improvements with optimism for the future. Unfortunately for everyone involved, a critical year three left everyone feeling disappointed.

This will be Muschamp’s fourth season with the Gamecocks, which is how long he lasted with the Gators. If the team can only deliver a six-win season, a real possibility given the September-October schedule, history could easily repeat itself.

After posting an 86-43 record at Houston and Texas A&M, expectations were pretty high when Sumlin arrived at Arizona. Despite walking into a program with one of the most exciting backfields in the country, Sumlin’s Wildcats went 5-7 in 2018.

It can’t happen again given some of the talents on this team. A path to a 4-1 or 5-0 start exists with an early slate against Hawaii, Northern Arizona, Texas Tech, UCLA and Colorado.

A hot start will be critical given the rough conference schedule, but it could be enough for Sumlin to get his team back until the bowl-eligibility picture. Of course, failing to secure the easy wins will only fuel another disappointing season.

It’s a bit surprising Ash is entering his fourth season with Rutgers. Seven combined wins across three years with zero conference wins in 2016 and 2018 are rarely tolerated at any program.

Rutgers will open its season with a winnable matchup against Massachusetts. Outside of that, the Scarlet Knights will only be a favorite against Liberty University and Hugh Freeze’s presence makes that a potential upset spot. If Rutgers comes out of October with one win, Ash doesn’t have an office in the building by Nov. 1.

Many of the coaches featured on this list are at risk of losing their jobs, but Shaw shouldn’t worry about that. A tough schedule in an improving conference is the real issue for him.

Early battles against USC, Central Florida, Oregon and Washington put the Cardinals in jeopardy of disappointing early. Shaw has won nine-plus games in six of his seven seasons at Stanford, but maintaining that high mark will be incredibly difficult in 2019.

If the Cardinals’ conference title hopes are shot down out of the gate, the excitement from everyone around the program will fade quickly. Fans and boosters can only take that for so long after years of being a consistent top-15 program.

Seven wins quickly became the standard during Addazio’s tenure with the Eagles. Now as he enters his seventh season with the program, it would be fitting if it proved to be his last.

Addazio found himself on the hot seat at the end of the year after Boston College got off to a 7-2 start then dropped its final three games and lost significant momentum for the future.

Coaches that saw their fate essentially come down to a coin flip in the offseason obviously need a string of wins early in the following year to have any shot at staying employed. Addazio desperately needs his defense to step up early in the year or the interim coach will be asked to do it.

No collegiate coach is under more pressure to start the season hot than Helton. USC’s athletic director Lynn Swann gifted him another season, a luxury that he won’t be afforded if 2019 provides more heartbreak and disappointment for fans.

The Trojans will be tested repeatedly in the first few weeks with games against Stanford, USC and Utah before September ends. Survival will be critical during that stretch as a few early missteps with upcoming contests versus Notre Dame and Oregon will prove even more challenging.

Helton’s successor could already be on the staff with offensive coordinator Graham Harrell providing the innovative, young mind that fans will love. Helton must win in September or he might not get the opportunity to even make it through October.