10 college football coaches under most pressure heading into 2018

Patience is often thin in the college football world. No matter how coaches are doing on the recruiting trail or in development, expectations must be matched or surpassed on the field. Otherwise, their job is at risk.

Entering the 2018 season, several coaches will be feeling extra pressure to excel. While that doesn’t mean a poor campaign will result in a pink slip — although in some cases, it might — a rough 2018 can become problematic in the near future.

No matter who replaced Dino Babers at Bowling Green, it would’ve been difficult. The roster lost an All-MAC quarterback and several standout receivers. Still, six wins in two seasons is a problem. The Falcons went 4-8 in Mike Jinks’ first year and dipped to 2-10 last season, during which they ranked 84th in total offense per game and surrendered 30-plus points in nine contests. Few victories will follow with that combination plaguing the roster. If Bowling Green doesn’t improve in the win column, frustration will start to mount and Jinks’ job security will drop. 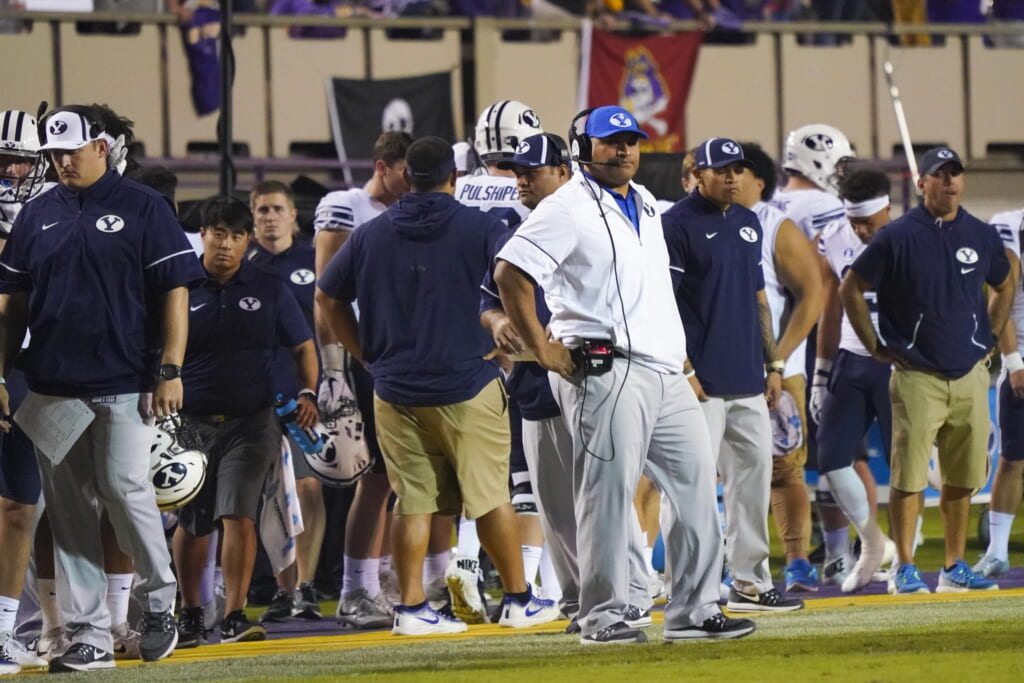 Last year, a streak of 11 consecutive winning seasons came to a screeching halt. BYU knocked off Football Championship Subdivision foe Portland State in the opener but then fell in seven straight tilts. Top competition simply outclassed the Cougars, who also lost to Utah State and East Carolina during that stretch. They ultimately mustered a 4-9 mark while ranking 119th in total offense per game. Kalani Sitake’s future likely depends on BYU finding a reliable quarterback. Should that not happen quickly, he’ll begin losing supporters at a proud program.

Charlotte has been a member of the Football Bowl Subdivision for three years. It hasn’t gone well. Brad Lambert’s teams have mustered 2-10, 4-8 and 1-11 records, never posting an offensive rank higher than 102nd in that span. So in five total years with the 49ers, Lambert has managed a 17-41 mark. The energy he spent building the program is important, but Charlotte can’t wait much longer for Lambert to succeed. The 49ers may need to compete for — and possibly attain — bowl eligibility next season for him to stick around.

The college football world immediately questioned East Carolina’s decision to fire Ruffin McNeill following the 2015 campaign. And in this case, the initial reaction has proved correct. While the administration is at fault for that, Scottie Montgomery has struggled in his first opportunity as a head coach. The Pirates have recorded 3-9 seasons in both years under him. Plus, now that Gardner Minshew has left school citing a family matter, Montgomery must find a new quarterback in a season that could define his tenure. That’s a huge task. 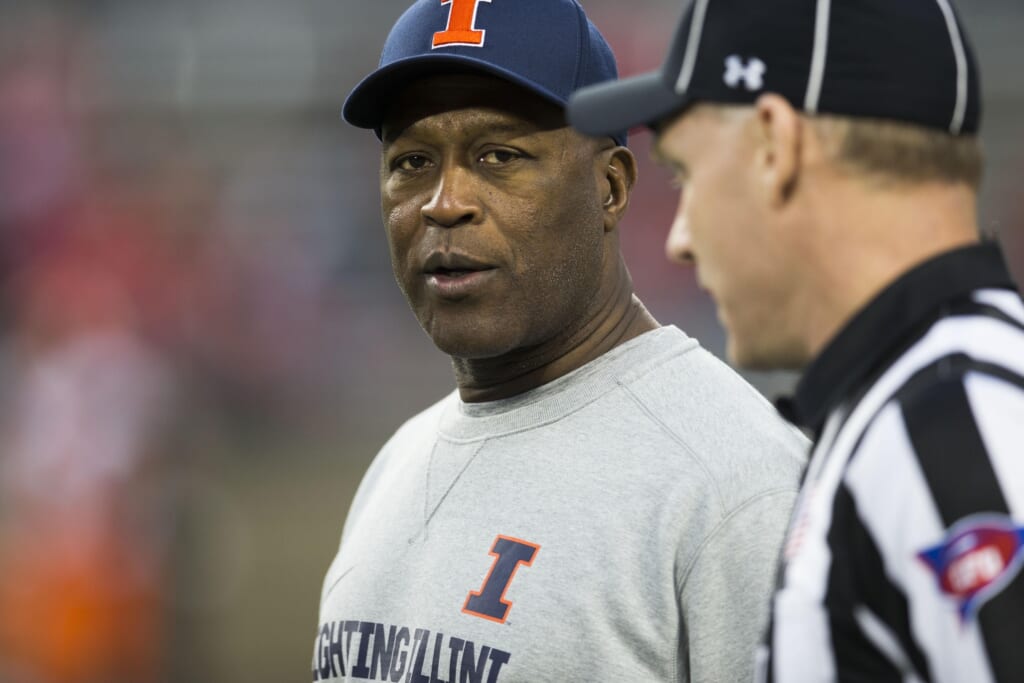 Illinois’ dreams of a resurgence under a former NFL coach appear ill-fated. In two seasons at the school, the Illini have trudged to 3-9 and 2-10 finishes and lost 16 of 18 contents against Big Ten opponents. That’s no surprise, considering the offense’s problems. Illinois has ranked 123rd and 127th in yards and 122nd and 127th in scoring during Smith’s two seasons. Since his buyout is $12 million through January 2019, the school might be reluctant to fire him even after another bad campaign. But the concern about Smith’s tenure is very real — and may only get louder.

He inherited a horrible situation; Kansas was never going to be a quick turnaround. Nevertheless, David Beaty’s responsibility is to win, and three victories in three years is a problem. And against Big 12 opponents, the Jayhawks are a paltry 1-26 with only three of those losses being a one-possession margin. In other words, they simply haven’t been competitive. Kansas returns the second-most production in the nation, per SB Nation’s Bill Connelly, so Beaty has never had a better opportunity to show growth. Failing to do that, though, will create pressure for a new boss in Lawrence.

Everybody say it together: Jim Harbaugh is not on the hot seat. That does not change the concurrent truth more is desired from the touted coach. Michigan exceeded expectations with a 10-3 record in his debut but had a championship-caliber roster in 2016 and finished 10-3 again. Then last season, the Wolverines fell to 8-5 because of a weak passing game. Regardless of what happens in 2018, Harbaugh won’t be pushed out of Ann Arbor like he was with the San Francisco 49ers. His widespread support, however, will take a considerable hit if the offense wastes another elite defense. 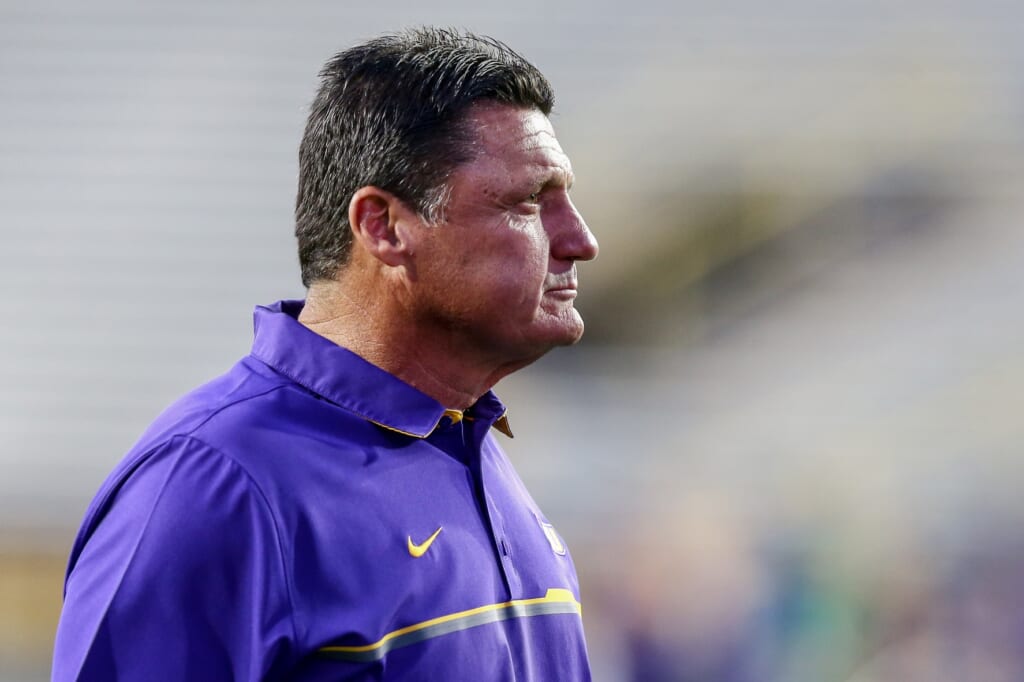 LSU moved on from Les Miles because he was stubborn, and Ed Orgeron is at risk of repeating his predecessor’s mistake. After hiring a creative offensive coordinator — something Miles refused to do — Orgeron essentially forced out Matt Canada within a year. Although the Tigers went 9-4 last season, the administration will expect steady progress from Orgeron. That’ll be tough to accomplish with an overhauled offense, retooled defense and a schedule that includes Miami, Auburn, Georgia and Alabama, but that’s the nature of playing in the SEC West.

Had the Red Raiders not pulled off a fourth-quarter comeback against Texas in the 2017 regular-season finale, Kliff Kingsbury might’ve already been fired. Instead, the program legend saved his job for at least another year. His tenure has consistently included top-tier offenses but also been plagued by below-average defenses or worse. On the potential bright side for Kingsbury, the defense finally showed improvement last year. Sustaining that progression is key to making 2018 the turning point of his coaching career, because another 6-6 year probably won’t be acceptable in Lubbock.

Vanderbilt is a challenging place to win, there’s no question about it. Expectations are still relatively high, though, and Derek Mason is just 18-31 — and 6-26 in SEC play — with one bowl appearance. Nobody reasonable will argue that’s good enough, and it doesn’t help he succeeded James Franklin, one of the more successful coaches in program history. The offense has continually flopped in key games, and the defense allowed 34-plus points seven times in 2017. Vanderbilt must be more consistent next season, or else Mason’s seat will begin warming.