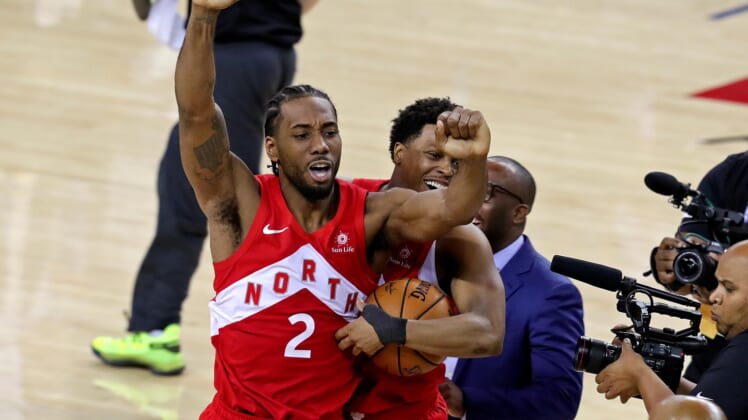 The “long” wait is now over. A mere two weeks after the Toronto Raptors won their first ever NBA title, free agency is slated to start around the Association.

It’s one of the biggest free agency periods in recent history and includes multiple future Hall of Famers.

Is Kyrie Irving etched in stone to sign with the Nets? Will Kevin Durant leave the five-time defending Western Conference champs in free agency?

These are among the top-10 questions as we head into NBA free agency weekend.

How will the Lakers use their max spot?

Los Angeles’ general manager Rob Pelinka pulled a rabbit out of his hat by expanding the Anthony Davis trade. It enabled the Lakers to add a third max-contract player beyond Davis and LeBron James. The only question here is whether the team will in fact do that. Both Kawhi Leonard and D’Angelo Russell seem to be real possibilities. But with just five players on their current roster, the Lakers could decide to go with quantity over quality. Would three or four solid rotation pieces be better than a top star? That’s a major question.

Will the Hornets up the ante for Kemba Walker?

The Hornets are said to be offering their All-Star guard $160 million over five seasons. That’s about $60 million less than the team can offer under a max contract. It’s inconceivable that Charlotte wouldn’t up the ante to keep its star player. The alternative is rebuilding with an expensive “core group” of Nicolas Batum, Bismack Biyombo, Marvin Williams and Cody Zeller ($71-plus million combined salary in 2019-20). At this point, the Hornets might have already burnt this bridge. It has to be seen as a slap in the face for Walker.

Will the Nets actually build that super team?

Barring a dramatic last-minute change, Brooklyn is going to land All-Star guard Kyrie Irving once free agency opens. That’s been known for some time. The question here is whether general manager Sean Marks and Co. can add that second max player to go with Irving, Jarrett Allen, Spencer Dinwiddie and Caris LeVert. They have been linked to multiple stars, Kevin Durant and Jimmy Butler included. How this plays out over the next week will have wide-ranging ramifications back east.

What is Kevin Durant’s future?

Durant is spot up in New York City recovering from the devastating ruptured Achilles he suffered in the NBA Finals. Whether he takes meetings from teams is up for debate. What we do know is that Durant is considering the Warriors, Nets, Knicks and Clippers in free agency. We also know that he’s more than likely to miss the entire 2019-20 season. That’s apparently turned a couple teams off. If Durant were to take the $57 more in guaranteed cash to re-sign with Golden State, it would change the entire dynamic moving forward. The same thing can be said if he signs in Southern California or heads to the Big Apple.

Can the Rockets build up, not tear down?

Suggestions of Chris Paul’s rift with James Harden and a related trade request have died down recently. They’ve been replaced with reports that Houston is looking to team Paul and Harden up with Jimmy Butler. That might be a pie in the sky hope, but it tells us just how proactive general manager Daryl Morey has been. Whether this happens is anyone’s guess. It would require Houston moving on from Clint Capela, P.J. Tucker and Eric Gordon, further depleting the team’s depth. Is that the way to go? We’ll find out soon enough.

How will the Celtics handle free agency?

One major shoe that could possibly drop is the signing of Kemba Walker. Should that come to fruition here soon, the Celtics will find themselves in a tremendous spot. An argument could even be made that Walker is an upgrade over Kyrie Irving. At issue here is the possibility that Boston could be placing all of its eggs in one basket. The team is said to be interested in Clint Capela to replace Al Horford. Whether Philadelphia would help a conference rival add Capela in a three-team trade with Houston remains to be seen. What we do know is that GM Danny Ainge has an important week-plus ahead of him. That’s for sure.

Will the Clippers land that star?

The “other” Los Angeles team is seemingly targeting only top-tier options to team up with its young core. The obvious name there is reigning NBA Finals Kawhi Leonard. At this point, it does seem to be between both Los Angeles teams and the Raptors for Leonard’s services. Should the Clippers fail to add Leonard, Kevin Durant becomes a possibility. They’re also said to be interested in Al Horford. In any event, Los Angeles must be proactive in adding to the young core of Shai Gilgeous-Alexander, Landry Shamet and Montrezl Harrell if it wants to be players out west.

It seems to be rather ridiculous on the service. Leonard is the toast of Canada after leading the nation to its first ever NBA title. He could literally have the keys to Toronto if the reigning NBA Finals MVP re-signs with the team. However, Leonard is seriously considering a return to his Southern California roots. That also seemed unfathomable just a year ago when reports indicated he did not want to share a market with LeBron James, let alone a team. More so than any other free agent, Leonard’s decision will have reverberations throughout the NBA.

Will the Knicks be shut out?

Recent indications are that the Knicks might be turning their attention to second-tier free agents. They have not yet received a commitment for a meeting from Kawhi Leonard. Meanwhile, Kevin Durant’s situation remains up in the air after his Achilles injury. Two players on the Knicks’ radar, Terry Rozier and DeMarcus Cousins, wouldn’t represent the franchise-altering signings that New York’s brass has been hoping for since making room under the cap. The question now becomes whether New York will be shut out of first-tier free agents completely. If so, it will be another black eye for this long-downtrodden organization.

What major surprises can we expect?

Kyrie Irving to the Nets. Kawhi Irving either to Los Angeles or Toronto. The Celtics acquiring Kemba Walker. These are all moves most people expect to happen. But we already know there’s going to be surprises. What if the Warriors don’t offer Klay Thompson the max? Will he leave? Maybe Kevin Durant re-signs with the Warriors a long with Thompson. Predicting surprises is what makes them surprises. However, we’re going to go with one. Kyrie Irving joins LeBron James in Los Angeles. Imagine that!