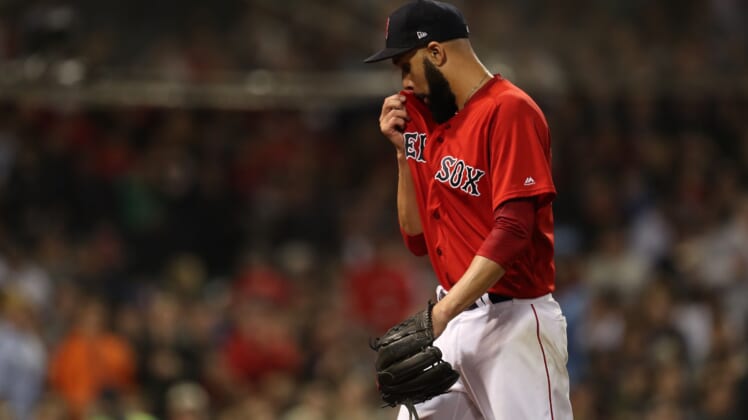 The moment is here. The Boston Red Sox and Houston Astros are just four wins away from an American League pennant and a ticket to the World Series.

This year’s ALCS matchup aligns two of the most-exciting teams in baseball against each other. Both teams are packed with star power in their rotations, bullpens and lineups.

Fans will see plenty of marquee matchups in this series on both sides with Chris Sale and Craig Kimbrel facing George Springer, Jose Altuve and Alex Bregman. On the other side, we’ll see Justin Verlander and Gerrit Cole squaring off against Mookie Betts, Andrew Benintendi and J.D. Martinez.

Of course, this series is about more than star power. While these players will make a big difference, it’s the lesser-known players who step into the spotlight and can decide this matchup. Ultimately, this series will come down to a few distinct elements.

Here are 10 burning questions heading into the ALCS.

Can Boston’s bullpen pull it together?

It remains Boston’s most-glaring concern and one that became even more alarming with Craig Kimbrel’s issues this postseason.

In the best-case scenario where Boston’s starting pitcher gives the team five or six innings, it is still leaves with three to four innings to cover. The bridge to Craig Kimbrel, with Joe Kelly, Matt Barnes and Ryan Brasier often handling the role, remains shaky at best.

Of growing concern is Kimbrel’s recent skid. One of the best relievers in the history of baseball, the 30-year-old allowed three earned runs and four baserunners in his two ALDS appearances. If this isn’t corrected, no lead is safe and Boston will likely be swept.

What version of Carlos Correa will Houston see?

Houston is hopeful Correa’s home run at the end of Game 3 is a sign the All-Star shortstop is back. However, we truly don’t know if Correa is even close to recovered from the back injury that bothered him for the entire second half.

If Correa isn’t healthy and it impacts him at the plate, Houston will have a hitter similar to Correa’s .180 batting average and .517 OPS in the second half of the season. If Game 3 demonstrated his confidence and swing are back, then we’ll likely see the All-Star shortstop who posted a .941 OPS in 2017.

Houston doesn’t need Correa to win the ALCS. Its lineup is already capable of beating Boston, but a healthy version of Correa can make this into a team that won’t lose a single game this October.

Price entered the postseason with momentum on his side. After a brilliant second half, in which he posted a 2.25 ERA and .200 BAA, he should have entered October with the confidence to excel.

Instead, he couldn’t even make it two innings against the Yankees. A lack of consistency in October haunted him in recent years, but fans also witnessed postseason brilliance from him in 2014 and 2017. He does have a good track record against the Astros, which signals a positive.

Price recorded a 2.57 ERA and .208 BAA in 21 innings versus Houston over the past three seasons. His performance in Game 2 of the ALCS could ultimately determine this series. If he excels, he’ll save Boston’s bullpen and could put them in position to win. If he turns in another disastrous start, Boston may have to burn its bullpen early and facing a two-game deficit in the series with a tired bullpen.

Older fans may not like hearing Springer connected to the nickname “Mr. October,” but he is starting to earn it.

In his past 21 postseason games, the 29-year-old owns a .686 slugging percentage and 1.078 OPS with 27 hits and nine home runs. Springer seems to flip a switch in October and has become Houston’s MVP when the leaves start falling.

If Springer can deliver another three home runs in this series with six-plus RBIs and a 1.000-plus OPS, he’ll add another award to his trophy case and quickly adding to his sensational legacy in the postseason.

When does Boston make its first mistake?

Houston enters this series as a clear favorite and there’s a reason for it. This is an experienced team that is nearly flawless from a talent perspective. The team is also coached well and execute on opponent mistakes.

This will be the difficult test for Boston and manager Alex Cora. He has done a phenomenal job in his first year as manager, but potential mistakes go beyond his own. As we saw in Game 3 of the ALDS, it was a tight game throughout until Trevor Bauer’s fielding errors. Once those happened and Houston was gifted free baserunners, it buried Cleveland.

It makes this series so much more difficult for Boston. The Red Sox are in a position where they can’t really afford to make mistakes and will be extremely fortunate to get away with one or two. This will be one of the biggest keys to watch in this series and will determine if Boston can pull off the surprise.

The stars deserve all of the headlines and attention they receive, however, each October we see a player come from way off the radar and make a monumental difference for his team.

Marwin Gonzalez stepped into that role in the ALDS. He led the team in RBI (five), posted a .538 batting average and seemed to deliver every timely, run-scoring hit in the series. If he can just give Houston another batter who comes through in clutch moments, it will be huge for this team.

Fans can also keep an eye out on first baseman Tyler White, relief pitcher Ryan Pressly and outfielder Tony Kemp. Each can be plugged in for certain roles and have been highly effective at times this season.

Everyone is excited about Boston’s young core and for good reason. Betts, Rafael Devers, Andrew Benintendi and Xander Bogaerts are all electrifying players. However, there is some reason to wonder about how much longer Boston’s window will be open.

It’s not about this team falling off the map, but becoming more of a fringe contender. Boston finished this season as one of just two teams over MLB’s luxury tax threshold. The fines will be sizable this offseason. Meanwhile, Betts and Bogaerts are due for sizable pay increases.

Boston will head into the offseason with a possibility of losing Kimbrel and a few role players. If Kimbrel walks, the issues in the bullpen will become an even greater issue moving forward. Additionally, the rotation still leaves some long-term concerns.

Pair all of that with one of the worst farm systems in MLB and it becomes more difficult to see how the Red Sox will fix their pitching issues. Overspending in free agency risks massive luxury tax penalties going forward, which will hurt Boston’s chances of signing its young stars in the future.

How does Dallas Keuchel perform before free agency?

While Keuchel is not the pitcher he used to be, the postseason offers the former Cy Young winner the chance to show he is worth a sizable contract as a No. 2 starter.

Keuchel held his own this season once again and finished the year with a 3.74 ERA and 153 strikeouts across 34 starts. He pitched fairly well in his first start this October with four hits and two runs allowed in a Game 3 win over Cleveland. Now he’ll face an even tougher test this series against Boston’s lineup.

While Houston doesn’t necessarily need to win Game 3, it could be critical in this series depending on how they fare in Boston. It could also be an important game for Keuchel’s stock in free agency. If he comes through, Houston will coast to the ALCS and Keuchel will cash in this offseason.

Can Nathan Eovaldi step up for Boston?

One of the big difference makers in Boston’s ALDS victory, Eovaldi experienced a lot of success in Boston since his arrival. Now he finds himself facing the biggest stage of his career.

He will likely take the mound for Game 3 in Boston, taking the mound on the road in a game that could swing the series. He dominated New York’s hitters, a big reason why the Red Sox acquired him. This upcoming start against Houston will be difficult.

If Price struggles in Game 2, even more pressure will be on Eovaldi to work deeper into the game. Boston can take one of its first two games at home and Eovaldi could provide a monumental swing in momentum if he helps the Red Sox win Game 3 and take an early 2-1 lead in the series.

Who wins the pennant?

This is what it all comes down to, which team comes through and gets to pop the champagne then gets their shot at the World Series.

Both of these are very good teams and each has certain elements that could put them in the World Series. Home-field advantage helps Boston early in the matchup, but this series comes down to who has the fewest flaws and executes.

Ultimately, the clear choice becomes the Astros. They are the superior team across the board and are in position to make less mistakes throughout the series. Boston will take a game at home, but Houston will celebrate in five and have a shot at repeating as World Series champions.