10 bold predictions for the remainder of the NBA season 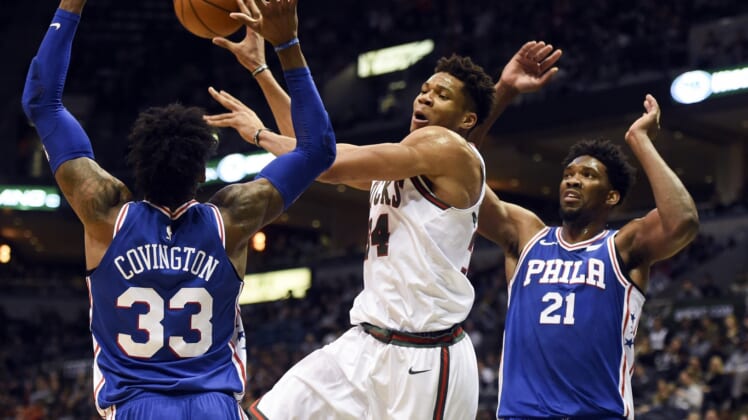 Now that we’re in the midst of the NBA All-Star Break, the Association is preparing for what promises to be a hectic final six weeks of the regular season.

Unlike previous seasons, the Western Conference is nowhere near decided. How will that play out with the Warriors and other up-and-coming teams.

Back east, the conference is pretty much front-loaded. This means multiple teams should earn a playoff spot despite being under .500. Meanwhile, the Philadelphia 76ers could surge to the top of the conference.

It’s in this that we give you 10 bold predictions for the remainder of the NBA season coming out of the break.

Sixers finish as the No. 1 seed in the Eastern Conference

Philadelphia’s home loss to a Kyrie Irving-less Boson Celtics squad won’t help the narrative heading into the All-Star Break. An angry Joel Embiid and the Sixers are now 6.5 games out of the top seed in the Eastern Conference with 24 games remaining on their schedule. Heck, head coach Brett Brown seems to think that Boston is still the odds-on favorites in the Eastern Conference.

We’re here to throw a bit of water on that idea. General manager Elton Brand did a tremendous job at the deadline — adding the likes of Tobias Harris, James Ennis and Jonathon Simmons to the mix. The three will team up with Embiid, Ben Simmons and Jimmy Butler to form a dynamic group in Philadelphia. Not having to worry about their bench anymore, we’re predicting Philly finished the regular season winning 19 of its final 24 games to earn the No. 1 seed back east.

Kings grab home-court advantage in the first round

These are bold predictions for a reason. Sacramento heads into the break with a 30-27 record and as the No. 9 seed out west. It is lumped in with six different squads for the final two playoff spots in the Western Conference. It’s the Kings’ first foray into relevance this late in the season since all the way back in 2005-06.

We’re here to say that this success will have staying power. Vlade Divac and Co. did a tremendous job at the deadline — adding Harrison Barnes and Alec Burks to a talented young core. It’s currently just 4.5 games out of a top-four seed out west. Equally as important, the Kings boast a 20-16 record since a 10-11 start to the season. This success will continue post-break.

It’s pretty obvious that Houston Rockets guard James Harden is the odds-on favorite to win his second consecutive NBA MVP. Here’s a dude that has recorded 30-plus points in a whopping 31 consecutive games. He’s doing something we have not seen since the days of Wilt Chamberlain. That’s all fine and dandy. But this award is about the most. valuable to his team. Houston heads into the break 10 games behind Milwaukee in the overall NBA standings.

For his part, the human-highlight reel that is Giannis Antetokounmpo has taken flight big time this season. Not only does he has Milwaukee with the NBA’s best record, he’s putting up some absolutely insane numbers. Here’s a dude that’s averaging 27.2 points, 12.6 rebounds, 6.0 assists, 1.4 steals and 1.4 blocks while shooting a majestic 58 percent from the field. He is the NBA’s MVP at this point and will prove himself worthy of the award as the seasons draws to a conclusion.

What people have seemed to miss during Doncic’s awe-inspiring rookie season is that the teenager is a nightmare matchup. He stands at 6-foot-7 and is taking on fellow shooting guards. More often than not, that’s been a fruitless endeavor for opposing players. Doncic comes out of the break averaging 20.7 points, 7.2 rebounds and 5.6 assists per game. Those are some absolutely insane numbers.

We’re here to predict that Doncic will average a double-double over the final 25 games of the season. More to the point, the Rookie of the Year favorite will average 25.0 points and 10-plus rebounds per outing. After all, Doncic is averaging nearly nine rebounds over his past 11 games.

As top heavy as this conference might be, it’s probably going to be a pretty big snooze in the first-round of the Eastern Conference Playoffs. Only five teams entered the break with winning records. As of now, the Brooklyn Nets, Charlotte Hornets and Detroit Pistons would all make the playoffs with losing records. After that, the Miami Heat, Orlando Magic and Washington Wizards are all still in contention.

Given how top-heavy this conference is, we’re going to go ahead and predict that three teams earn a playoff spot with losing records. This will certainly give the top-three seeds back east an easy go of it in the first round. At least, one might think.

Lakers still find a way to make the playoffs

It goes without saying that Los Angeles’ recent pre-break stretch was an absolute disaster. He’s a team that lost to the Victor Oladipo-less Pacers by 40-plus points and then fell to the lowly Atlanta Hawks in its final game before the break. With drama surrounding the roster following a failed trade deadline and Luke Walton’s hold on the job tenuous, the Lakers will come out of this weekend’s break at 28-29 and as the 10th seed out west.

Sure doom and gloom appears to be the name of the game. But we’re here to show a bit of objective optimism. The Lakers still have LeBron James. They did add reinforcements at the deadline. Another veteran will come in via the buyout market. With almost half their remaining game coming against losing teams, we’re expecting a late-season run from LeBron and Co. That will be enough to secure the eighth seed out west.

Much to Kevin Knox’s chagrin, the tank for Zion is well underway in the Big Apple. These Knicks are in the midst of their worst stretch in franchise history. New York has now lost 19 consecutive games and 32 of its past 34. That’s expansion level horrible right there. With no real reinforcements to come and and no incentive to win, the Knicks are going to be an absolute train wreck as the season comes to a conclusion.

We’re here to predict that New York wins only two of its final 24 games coming out of the break to finish the season at 12-70. It would be the worst record for an NBA team since Philadelphia back in 2015-16. Given 14 of the Knicks’ final 24 games come against teams with winning records, this prediction might actually not be that bold.

Some might want to point to the lackluster efforts Golden State has put up at times this season to suggest the two-time defending champs have taken a step back. There might be some merit to it. That’s until we realize the Warriors are attempting to become the first team since the Boston Celtics back in the 50s and 60s to earn five consecutive NBA Finals appearances. Games from October to late February mean very little to this team. It’s all about remaining healthy.

Despite blowing up in the final pre-break game on Wednesday, Golden State has won 16 of its past 18 games. The team is completely healthy with DeMarcus Cousins fitting in just fine. Given the competitive nature of the Western Conference, Golden State won’t be able to hit cruise control over the final month and a half of the season. It’s in this that we predict the team will lose just two more regular season games. With half their games coming against team that are under .500, that’s magnified further.

The brass in D.C. can blame their struggles on an injured John Wall or the lack of production from the recently traded Otto Porter Jr. That’s all fine and dandy. But in reality, owner Ted Leonsis must look at the lack of any real cohesion between coach Scott Brooks and general manager Ernie Grunfeld.

There’s absolutely no reason to believe that these two will be able to right the ship in the nation’s capital. With Wall likely out through a good portion of next season, rebuild needs to be the name of the game for these Wizards. We’re going to predict that Leonsis makes the decision to expedite the start of the rebuild with a new coach and general manager calling the shots.

Anthony Davis ends up sitting out

It’s simply insane that the NBA is threatening to fine the Pelicans $100,000 for every time they rest a healthy AD. Davis himself requested a trade earlier in February — leading to him being fined by the NBA. His lack of effort since the trade deadline passed has certainly been cause for concern.

Davis has no interest in playing for the Pelicans. His teammates know this. His head coach knows this. And for their part, the Pelicans are risking minimizing the value they receive in a trade by playing Davis. We’re predicting that the NBA takes a step back and allows New Orleans to sit Davis. After all, how is this any different from the Carmelo Anthony and J.R. Smith situations? It isn’t.