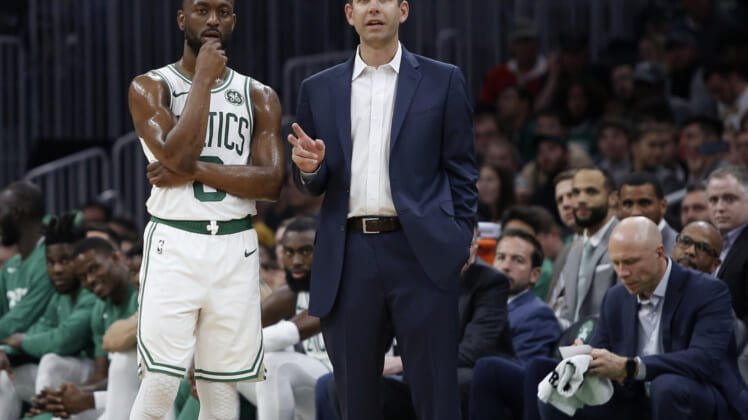 Heading into opening night, the NBA is as wide open as it’s been over the past half-decade. The Golden State Warriors are no longer odds-on favorites out west. Meanwhile, both the Clippers and Lakers have built super teams.

Back east, young upstarts such as the Atlanta Hawks and Chicago Bulls could make some noise. In Boston, the Celtics could be looking at a season of regression.

The Atlanta Hawks have themselves a heck of a young team. After starting last season with a 14-32 mark, the team finished up 15-21 in its final 36 games. That’s marked improvement led by sharp-shooting youngster Trae Young and Co.

Now set to go from the bottom rung of the Eastern Conference to a legit playoff contender, we’re boldly predicting that Atlanta finishes as a top-five seed. Fellow youngsters Kevin Huerter, John Collins and De’Andre Hunter have this team on the brink of something special. Expect Atlanta’s rebuild to take the next step in 2019-20.

Rockets take a step back from last season

Most experts are looking at the Rockets as a top-end title contender this season. We’re just not seeing it. General manager Daryl Morey pulled off that invevitable blockbuster trade during the summer, adding Russell Westbrook to form an MVP backcourt with James Harden. There’s some major issues here.

Houston struggled the past two seasons with a ball-dominant tandem in the backcourt. What makes us think things are going to change in 2019-20? Harden and Westbrook averaged a combined 45 shots last season. They hit on just 43% of them. Is this indicative of NBA championship contention? We’re not too sure.

Some conclude that the Eastern Conference is somehow improved over last season. That could very well be the case. But with Kevin Durant out for the season in Brooklyn and Kawhi Leonard now in Southern California, we’re not too sure. This is going to leave open the possibility that a lottery team from last season surprises the masses.

We’re opting to go with a young and talented Chicago Bulls squad led by Zach LaVine, Lauri Markkanen and Wendell Carter. LaVine put up a career-best 23.7 points per game last season. Markkanen is a legit All-Star in waiting. Meanwhile, Chicago picked up stud wing Coby White in June’s draft and added solid veteran pieces in that of Thaddeus Young and Tomas Satoransky. This team is going to be absolutely legit in 2019-20.

There’s some decent news on the Minnesota Timberwolves front. Young head coach Ryan Saunders is attempting to instill a new culture in the Twin Cities after the entire Tom Thibodeau debacle. The bad news? This is the same organization that has earned one playoff appearance since the 2003-04 season and hasn’t seen a star player remain in Minnesota long term since Kevin Garnett.

In what is an absolutely stacked Western Conference this season, it’s hard to envision the Wolves improving off their 36-win 2018-19 campaign. That’s magnified by the presence of an overrated Andrew Wiggins as Towns’ running partner. This will all ultimately lead to frustration and KAT requesting a trade behind the scenes. Expect that to come to fruition in February.

Nets barely inch into the playoffs

Are we 100% sold on the idea of Kyrie Irving being a dramatic upgrade over D’Angelo Russell in Brooklyn? The answer to that question is a resounding no given how well Russell played for the Nets last season and Irving’s struggles in attempting to lead the Boston Celtics to relevance. The backdrop here is that Kevin Durant is expected to miss the entire 2019-20 season with a torn Achilles.

The expectation still has to be that Brooklyn makes its way to the playoffs. However, it’s not a foregone conclusion that this team will win much more than the 42 victories it earned last season. That will likely lead to a bottom-rung seeding once the spring comes calling.

Vegas currently has Curry with the third-best odds to take home the MVP award behind the likes of last season’s winner Giannis Antetokounmpo and new Los Angeles Lakers star Anthony Davis. To be clear, these are good odds. However, we’d caution against overlooking Curry.

More than anything, the two-time MVP is going to be asked to take on a completely new role now that Kevin Durant is in Brooklyn and with Klay Thompson out until at least February. It would not be a shock to see Curry average north of 30 points per game. And with the above-mentioned D’Angelo Russell as his running partner, that could come for a Warriors team capable of winning 55-plus games. This makes Curry an MVP front runner. Look for him to take home the award.

Celtics miss out on the playoffs

More than the losses of Kyrie Irving and Al Horford in free agency, we’re concerned about Boston’s young core taking that next step. It did not happen for either Jaylen Brown or Jayson Tatum last season. If that continues this year, Celtics general manager Danny Ainge will find himself on the hot seat after refusing to make either available in trades for Kawhi Leonard and Anthony Davis over the past 18 months.

Boston did add All-Star Kemba Walker to take Irving’s place. The team is also hoping that Gordon Hayward finally returns to pre-injury form. Even then, there’s a ton of question marks up and down this roster. With teams like the Bulls, Hawks, Heat and Pistons on an upward trajectory, we’re going to boldly predict that Boston misses out on the playoffs altogether.

Ja Morant surprises with Rookie of the Year

It’s all about Zion Williamson, baby! The generational talent is already making waves with his New Orleans Pelicans team. He seems to be an All-Star caliber player at the ripe age of 19. That’s fine and dandy, but Williamson won’t be asked to shoulder the burden in New Orleans. He has Jrue Holiday, Lonzo Ball, Brandon Ingram and J.J. Redick to help him out. It’s also worth asking whether he can stay healthy. Williamson is already slated to miss multiple weeks to open the season with a knee injury.

The same thing can’t be said in Memphis where Morant will be asked to distribute from the point guard position. He has another solid youngster in Jaren Jackson Jr. to help him out, but there’s not much more than that. Expect Morant to be given opportunity after opportunity to fill up the stat sheet. That will lead him to being the surprise Rookie of the Year.

Sacramento is coming off its best season (39 wins) since all the way back in 2005-06. It joins the New Orleans Pelicans as the team with the most talented young core in the Western Conference. De’Aaron Fox was a dynamo as a sophomore last season. Buddy Hield is coming into his own as a scorer. Marvin Bagley III was among the best rookies in the game.

Vlade Divac and Co. also added veterans Cory Joseph, Trevor Ariza and Dewayne Dedmon to the mix this summer while retaining underrated forward Harrison Barnes. Look for it all to come together under talented first-year coach Luke Walton, leading to 50-plus wins in California’s capital city.

The two Los Angeles teams. The five-time defending Western Conference champion Golden State Warriors. We’re here to throw cold water on all of these possibilities. Instead, the Denver Nuggets shock the NBA world and come out of the Western Conference. A core group of Nikola Jokic, Jamal Murray, Paul Millsap, Gary Harris and Will Barton is about as talented as it gets. Denver also added an underrated Jerami Grant in a trade and will return 2018 first-round pick Michael Porter Jr. from injury.

Back east, most of the focus has been on the same old Boston Celtics, Philadelphia 76ers, Milwaukee Bucks and Brooklyn Nets. None of that is going to happen. Rather, look for the Indiana Pacers to shock everyone. They will return former MVP candidate Victor Oladipo from injury here soon. Indiana added an impressive Malcolm Brogdon to team up with a core group that already includes Myles Turner and Domantas Sabonis.

A Denver-Indiana NBA Finals matchup would not be great for the Association. It sure wouldn’t draw the same ratings as say the Lakers going up against the Sixers or the Warriors taking on the Nets. But it would be one heck of a series. Look for this to come to fruition.