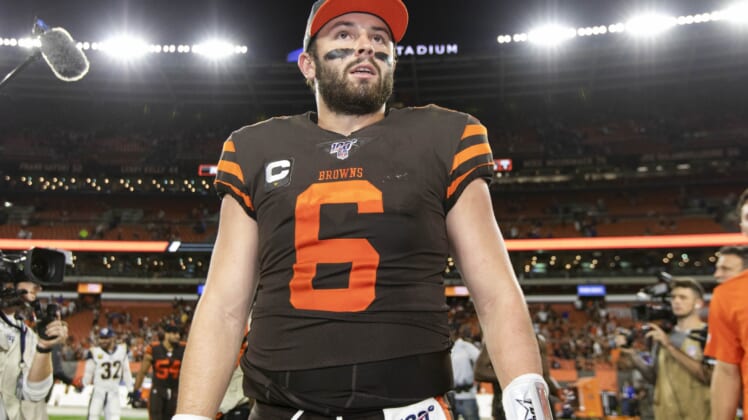 A majority of NFL teams will finish up their first quarter of the 2019 season this coming week. It’s already been a whirlwind season around the league.

Are the New England Patriots going to go undefeated after dominating their first three opponents? Maybe the Buffalo Bills and San Francisco 49ers have finally righted that ship after perfect starts to the season.

On the other hand, things don’t seem to be clicking for Philip Rivers and the Chargers as well as the Cleveland Browns. It’s in this that we look at the 10 biggest overreactions around the NFL heading into Week 4.

Tom Brady has led his squad to an average of 35.3 points per game. They have given up a total of 17 points in three games. It’s led to suggestions that this could be the best Patriots team of their two-decade dynasty.

We’re still not ready to buy into that. The Pats’ first three games have come against teams with a combined 0-9 record. Said teams have been outscored by an average of 28-12 in their other games this season. The Pats are good. They are legit Super Bowl favorites. But let’s pump the brakes on this being the best team of the greatest dynasty in NFL history.

Kyle Allen is the answer in Carolina

We’re not ready to proclaim that Cam Newton will somehow magically return from his latest injury and morph into the MVP player he was back in 2015. That ship seems to have sailed. However, the narrative that Allen is somehow the long-term answer in Carolina is absolutely absurd.

The second-year undrafted free agent put up a tremendous four-touchdown performance in a 38-20 win over the Arizona Cardinals last week. It was a stellar outing. It also came against a team that’s won three of its past 19 games and ranks 29th in scoring defense. Let’s see Allen do this on a consistent basis prior to Newton’s return before drawing ridiculous conclusions.

Time to panic in Los Angeles

At 1-2 on the season, Philip Rivers an the Chargers could very well be at a breaking point. Consecutive losses to the Lions and Texans adds to the intrigue as Los Angeles looks to build off last season’s run to the playoffs. With Kansas City a perfect 3-0 in the division, the Chargers need to get on a roll immediately.

That’s the bad news. However, Los Angeles has three consecutive games against winless squads in that of the Dolphins, Broncos and Steelers. They should be able to right the ship before a difficult stretch against the Bears, Packers and Chiefs. A 4-2 record heading into mid October is not out of the question here.

After completing north of 82% of his passes in the Cowboys’ first two games, Prescott regressed some against a league-worst Miami Dolphins defense this past week. He struggled a great deal with accuracy in the first half and completed less than 60% of his passes. It’s now time to throw some cold water on the idea that Prescott is up there with Tom Brady and Patrick Mahomes as a legitimate MVP candidate.

Let’s put this into perspective for a second. Prescott is now 31-12 as a starter with Ezekiel Elliott on the field. He’s 4-4 when the running back doesn’t play. That’s not necessarily the definition of MVP material. And while Dallas might be legitimate Super Bowl contenders, it’s the team-wide talent that makes this click. Prescott is not a top-three MVP candidate right now.

Bills and 49ers are pretenders

There’s a narrative that these two 3-0 teams are nowhere near as good as their records. We should throw that out the window immediately. Buffalo heads into its Week 4 matchup against the Patriots yielding the sixth-fewest yards and ranked in the top 10 in scoring defense. Josh Allen has ascended big time as a sophomore. Frank Gore continues to do his thing on the ground.

The story is somewhat similar in San Francisco. Led by the league’s No. 2 ranked defense, the 49ers have outscored their opponents by an average of 14 points per game. They rank fifth in scoring offense and fourth in total offense. Nick Bosa, DeForest Buckner and Dee Ford continue to dominate. With elite-level defenses, both the Bills and 49ers are for real. Don’t let the talk surrounding their weak schedules fool you.

Pass protection figured out in Houston

Protection did hold up in front of Deshaun Watson during Houston’s surprising Week 3 road win against the above-mentioned Los Angeles Chargers. In fact, he was sacked just two times and pressured at the lowest clip of his NFL career.

With that said, one game is not going to change the dynamic for these Texans. Watson has still been hit 23 times and sacked 12 times through three games. Even with Laremy Tunsil acting as a solid force at left tackle, pass protection remains an issue. Upcoming games against the Panthers, Falcons and Chiefs will be a good test. But until this line protects at a consistent clip, believing things are fixed is a major overreaction.

Teddy Bridgewater can hold down the fort

It took a special teams touchdown and another score on defense for the Saints to hold off a hard-charging Seahawks team in Seattle on Sunday. Was it an impressive performance for a team that is without Drew Brees for the long haul for the first time in 14 seasons? Sure. Is it a sign of things to come? We’re not too sure.

We’ll find out soon enough whether Bridgewater is up for the task. His Saints are set to host the undefeated Dallas Cowboys in Week 4. After that, New Orleans has relatively easy games against the Buccaneers, Jaguars and Cardinals with the Bears mixed in before Brees likely returns following the Saints’ Week 9 bye. How things look then will be telling. For now, we’re pumping the brakes on the Bridgewater hype.

Browns will right the ship

Losing two of their first three games seems like a major disappointment for the Browns after all of the preseason hype they received. But it’s a lot more than that. There’s this nagging feeling in Cleveland that the team is in store for yet another lost season after finishing up the 2018 campaign in grand fashion.

We’re here to say that said feeling is justified. First-year head coach Freddie Kitchens seems to be in over his head. Young quarterback Baker Mayfield has regressed in a big way after a record-breaking rookie season. It’s also not going to get easier for the Browns. Their next four games come against teams with a combined 10-2 mark. That includes outings against the Patriots and 49ers, who rank first and second in the NFL in total defense. It’s panic time in Cleveland already this season.

Rams are the class of the NFC

We need to give Rams head coach Sean McVay a ton of credit. His team ranks eighth in scoring offense and has yielded the seventh-fewest points in the NFL. This has all come against pretty decent opponents in that of the Panthers, Saints and Browns to open the season.

However, we’re not sold on the defending conference champs being odds-on favorites to come out of the NFC. The regression we saw from Jared Goff late last season is rearing its ugly head again. He’s now accounted for 11 touchdowns compared to 11 interceptions in his past 11 starts. Meanwhile, the NFC has gotten more competitive with the Packers, Cowboys and 49ers all vastly improved from a season ago.

We love it. This Washington State product is exactly what the NFL needs right now. A fun personality. A tremendous on-field performance early in his career. The Gardner Minshew hype train is already sold out. What a great story.

Now to be bummers for a second. Don’t expect this to last over the long haul. Once teams have more tape on the rookie late-round pick, regression will be the name of the game. Meanwhile, high-priced free-agent signing Nick Foles will return at some point in the second half of the season. Jacksonville is not benching Foles after handing him $88 million. Sadly, that means Minshew’s eye-opening early-season play will quickly be replaced by him holding a clipboard on the bench.