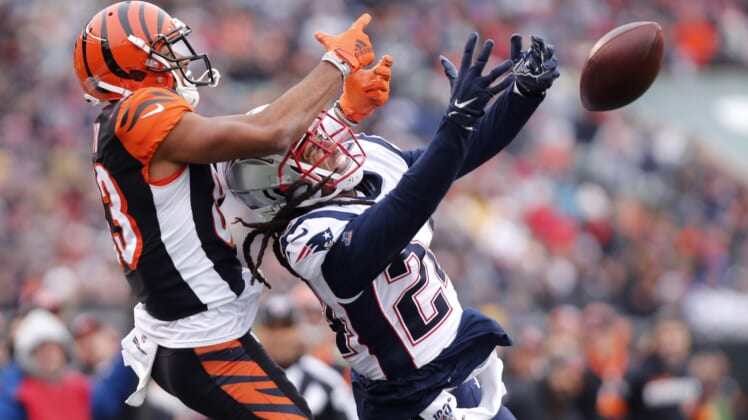 As the NFL celebrates its 100th anniversary and honors many of the game’s greatest players, the 2019 NFL season serves as the next chapter in the league’s story.

In an era when players are more athletic and receive better training and coaching, today’s NFL athletes are reaching new heights. It’s created an immense flow of talent into the game. As the game become better than ever, we’re seeing a few players stand out even more than their peers as the best in the NFL.

The 2019 season also reflects a changing of the guard before a new decade. As age catches up to some of the NFL’s best players from the 2010s, a new era of talent is taking center stage and capturing everyone’s eyes for the next decade. Now, let’s take a look at the 10 best players in the NFL this season.

No player is playing at Jackson’s level this year. He’s the favorite for the MVP award and the strides he made from his rookie year to now are insane. Jackson’s skills as a runner are highlighted, but he’s also been brilliant throwing the football.

He currently ranks fourth in quarterback rating (109.6), first in ESPN’s QBR (81.6) and hasn’t thrown an interception since Oct. 6. Jackson became the sixth player to have multiple games with a perfect passer rating and only the second with 25-plus touchdown passes and 750-plus rushing yards in a season. Oh, he’s also on pace to shatter Michael Vick’s single-season quarterback rushing record (1,039) and Baltimore is favored for the No. 1 seed. Nothing else needs to be said, except give him the MVP.

Everyone recognized Gilmore as a great corner before he signed with New England in 2017. He then elevated his game in the new scheme to become a first-team All-Pro in 2018. Now he’s raised his play to another stratosphere.

Only three qualified cornerbacks have held opposing receivers to catch fewer than 55% of their targets. Gilmore is a part of that elite club and he’s blowing away that competition too with a 48.6% reception rate. Furthermore, he’s recorded nearly as many pass deflections and interceptions (15) as completions (20). Odell Beckham Jr., Amari Cooper and DeAndre Hopkins – all shut down by Gilmore. He’s the best defensive back in the NFL in an era when rules favor the passing game.

Even in a lost season for the Panthers, McCaffrey is carrying this offense further than we thought humanly possible. Despite playing behind a bad offensive line and with a backup quarterback under center for two months, McCaffrey keeps eating.

Opponents know he’s getting the ball for a majority of Carolina’s plays and they can’t stop him. He ranks fifth in the NFL in receptions (75), second in rushing yards (1,167) and first in scrimmage yards (1,811) and total touchdowns (16). McCaffrey is going to blow past 400 total touches this season and it’s because he’s an All-Pro at running back and receiver. He’s greatness in every form – it’s that simple.

After J.J. Watt left a few teams with regret for passing on him in the 2011 NFL Draft, T.J. is now providing that same feeling for even more organizations. Since being selected with the 29th pick in 2015, Watt is making every team and their quarterback regret missing out on him.

The star outside linebacker ranks fourth in sacks (12.5), second in forced fumbles (five) and is tied for first in the NFL in quarterback hits (28), according to Pro Football Reference. He’s also just the third player in team history to record consecutive seasons with 12-plus sacks. He’s got an outstanding case to be the NFL’s Defensive Player of the Year and should get paid like one in the future.

It doesn’t matter who is at quarterback for the Saints or who he faces in coverage, Thomas is unguardable and he’s going to put up big numbers. He leads the NFL in receptions (110) by nearly 30 grabs, and ranks first in receiving yards (1,290) and receiving first downs (66).

Thomas’ hands are so good that he caught 198 consecutive passes without a drop, according to ESPN Stats & Info. He’s also on pace to shatter the NFL’s single-season catch record (143). The 26-year-old could sit out the rest of the year and still finish first-team All-Pro, but he’ll keep playing and enjoying his record-setting pace until he finishes a season for the history books.

Donald’s reign as the annual recipient of the NFL’s Defensive Player of the Year award will likely end this season. While he won’t win the hardware this season, every game proves why he remains one of the best players in the NFL.

He leads the NFL in tackles for loss (17), is on the verge of his third consecutive season with 10-plus sacks and he leads all defensive tackles in quarterback hits (18). Donald’s numbers might not be as absurd as his 2018 season, but he remains a force on the interior and a player that opposing teams must account for on every play.

While Mahomes isn’t going to repeat as NFL MVP or post more absurd numbers, it doesn’t mean he isn’t playing at a high level. He’s less than two months removed from suffering a dislocated kneecap, yet, he makes jaw-dropping plays look easy.

From a 63-yard, jump-pass touchdown to launching effortless 70-yard throws, Mahomes makes plays that we’ve seen from few others in NFL history. Oh, he also enters Week 14 with a 20-2 TD-INT ratio and the second-highest QBR (76.5) in the NFL. Now that Kansas City’s offense is healthy, we’ll see more incredible performances by Mahomes moving forward.

Jordan is simply an unstoppable force off of the edge. If you need evidence of his greatness, look back to his unfathomable performance on Thanksgiving against the Atlanta Falcons.

Even if you take out his four-sack outing against Atlanta, Jordan would still have 9.5 sacks in 11 games. He ranks fifth in the NFL with 22 quarterback hits and plays a huge role in New Orleans having the fourth-most sacks (40). Quarterbacks are the NFL’s gem and there are few better at causing them problems than Jordan.

Do not listen to Doug Gottlieb. Kittle isn’t an adequate blocker or even a good blocker. The tight end’s blocking is All-Pro caliber and it plays a pivotal role in San Francisco’s success this season. Of course, that doesn’t even factor in his skills as a receiver.

According to Dave Lombardi, the 49ers’ rushing attack averages 4.6 yards per carry with Kittle playing. When he isn’t available, San Francisco’s run game collapses to an ugly 2.6 yards per carry. Oh, he’s also drawing the highest tight end grade from Pro Football Focus in the site’s history. Between his dominance as a blocker, his 12.7 yards per catch and his big-play ability, there is no weapon like him in the NFL.

When you put yourself in Hall of Fame company, of course, you’re one of the best players in the NFL. We knew Wilson was an All-Pro quarterback and now he’s playing at an MVP-caliber level.

He ranks second in the NFL in touchdown rate (6.8 percent) and ranks fourth in interception rate (1 percent) on 383 pass attempts. Furthermore, he leads the NFL in fourth-quarter comebacks (four) and game-winning drives (five). He is precisely who you want in clutch situations and he gives Seattle a real shot at another Super Bowl.